How much do Kickstarter film projects aim to raise? This is part two of a multi-part series on the statistics behind crowdfunded film projects.  Last week, I shared when and where Kickstarter film projects are launched and today I’m addressing the target amount they are trying to raise.

This is the result of a data-crunching research project into the 47,809 film crowdfunding campaigns launched on Kickstarter between its inception in April 2009 and October 2015. In summary…

How film crowdfunding works on Kickstarter

I’m aware that I have a number of different audiences visiting this site, from new filmmakers right up to seasoned film industry professionals.  Therefore, here is a very quick primer in how crowdfunding works for the former, and the latter can skip to the next section.

When launching a Kickstarter film project you are required to state a target goal and a deadline date.  When the campaign is live, people pledge money (making them ‘backers’) in return for rewards (such as DVDs, t-shirts, etc) or just to help make the project a reality.

Once the deadline date has been reached, if the total amount pledged reaches the target goal then all the backers have their credit cards charged, the money is given to the project creator (minus fees) and the creator delivers the promised rewards to the backers.

However, if the total pledged is less than the goal amount, then nothing happens – the credit cards of the wannabe-backers are not charged and the filmmaker gets no money.

These lessons come from my new online course ‘A Crash Course in Crowdfunding for Filmmakers‘.  The course takes you through every step of the process of launching a successful crowdfunding campaign to raise your film’s budget.  Click here to see the full list of lessons from the course and for more free previews.

How much are Kickstarter film projects trying to raise?

Between April 2009 and October 2015, Kickstarter film projects were seeking an average of $61,766.  However, the average is raised by a small number of huge projects; the median goal over the same period was just $6,800. What types of Kickstarter film projects ask for the most money? 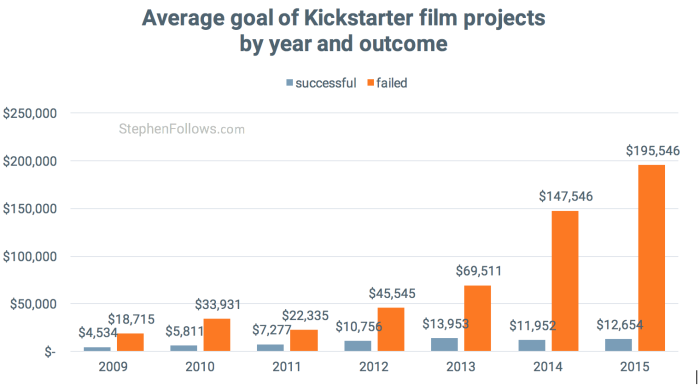 Does the size of a project affect its success rate? And if we split the first chart in this article by the project outcome we can see the same results. The largest film on Kickstarter to date was Veronica Mars, which raised $5.7 million from 91,585 backers in April 2013.  Their original goal was a measly $2 million, which they reached just ten hours after the project was launched.

The table below shows the completed Kickstarter film projects which have raised the most money to date.  It’s worth noting that right now it looks likely that there will be a new entry before the end of the year.  The project Bring Back Mystery Science Theater 3000 is currently raising money and has already reached $2.4 million (112% of its goal). Only time will tell if it will manage to beat Zach Braff’s Wish I Were Here‘s $3.1 million by its deadline of 12th December in order to claim second place.

In today’s article, when I looked at goal averages for the sub-categories within Kickstarter’s Film and Video category I excluded Movie Theaters because they’re not strictly film projects.  Their average target goal was $779,979 and they have a success rate of 22.6% (28 succeeded and 82 failed).

To read more about my methodology and notes please read the Methodology section at the bottom of last week’s article.

This is the second of my film crowdfunding articles – please bear with me as there will be a number of them.  There’s just so much data to share!

Next week, I’ll look at the amount projects received and by how many people.