3 July '16 11 Comments on What does a post-Brexit UK film industry look like? Right now, the UK film industry is trying to understand what the UK leaving the EU (“Brexit”) means for its future.  A small number of things in a post-Brexit UK film industry are certain, but the vast majority are open to opinion, conjecture and downright guessing.  I don’t profess to have a magic method of seeing the future, nor am I necessarily any good at disentangling scare tactics from useful predictions. However, I am keen to move the debate to a more useful, practical phase where we as an industry can start making sense of this uncharted territory.

So to help with this I have spent the last week talking to a number of people, running a survey of the industry and reading through the small print on various contentious issues.  Below I have shared my findings, and I will continue to update the article as my knowledge increases.  My hope is that this piece can act as a non-partisan reading of where we are currently at.  I will do my best to keep my own views out of it and I am hoping this creates a civil, open discussion in the comments section.  Seeing as denial is not an option, let’s see how quickly the industry can move past anger, bargaining and depression to reach acceptance.

Note: For the sake of ease I’m going to assume that the UK government does exit the EU but that the terms of such an exit are unknowable. This isn’t my opinion or a prediction, it’s just much easier to discuss how a post-Brexit UK film industry might look if we assume that the referendum result will be carried out.

A snapshot of the UK film industry, one week after the Brexit vote

I ran a survey of 156 film professionals, all of whom have attended a major film market (Cannes, Berlin or AFM) in the past five years.  I asked them a number of questions about Brexit and what the UK film industry should do next.

Around a third of my respondents were in the UK, a third were in other EU countries and the final third were based further afield.  Although this was largely by chance, it gives us a nice basis for comparing the views of film professionals around the world.  None of the respondents in EU countries were in favour of the UK leaving, only 7% of UK respondents were pro-Brexit and 11% of those outside the UK and EU were in favour. Those working on the biggest budgets were the most pleased with the Brexit decision, with almost a fifth of the people working on budgets over $30 million in favour of the UK leaving the EU. 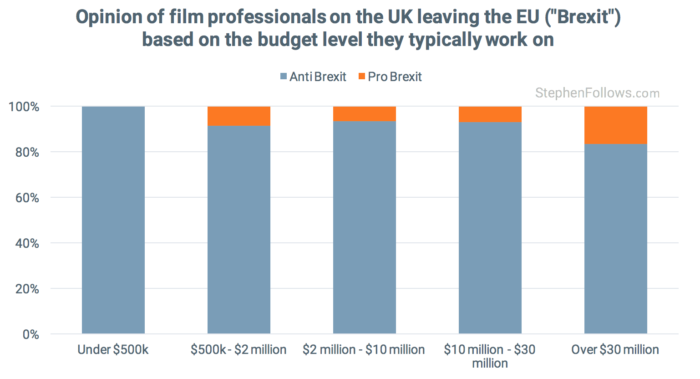 I asked my respondents how they thought Brexit would affect various aspects of the UK film industry. Overall, they felt that Production and Finance would be the hardest hit.  The least affected by Brexit were felt to be Marketing and Legal / Accounting. A way to view the UK film industry Many of the people I spoke to were having a hard time deciphering what Brexit could mean for the UK film industry.  This was in part because “the UK film industry” is not one entity but a collection of third parties co-existing. There is even one viewpoint, championed by ‘Kingsman’ director Matthew Vaughn, that the UK film industry doesn’t exist at all.  In order to help people form a view of what we as an industry should do next, let me put forward a way of looking at the UK film industry and then discuss how it looks like Brexit will affect it.

If we ask the question, “What is the purpose of the film industry?” then we can group the answers into three broad categories…

So how may Brexit affect each of these viewpoints?

Based on this way of viewing the industry, it looks like Brexit will negatively affect the artistic side of UK film far more than the industrial or promotional aspects of the industry.

But this is just my current reading of the facts – what’s your opinion?  Add your thoughts in the comments below.  I will update this article to correct mistakes and to add any salient new facts which come to mind.  Feel free to also add your own ways of viewing ‘UK Film’ and therefore what effect Brexit may have. Last week I wrote a politics-free piece on possible outcomes of Brexit and I received messages (publicly and privately) criticising me on both sides of the debate.  Some thought I was being too light on a post-Brexit film industry while others accused me of scaremongering.  This was a bit discouraging as I had done my best to be even-handed and unbiased.  On the other hand, it was nice to see that the vast majority of messages and comments were on topic and also trying to understand this new, unexpected future.

Please do add your comments below if you want to correct an error, point something out that’s missing or in any way add to the intellectual debate.  However, if you just want to blindly vent your anger and frustration then please don’t.  That’s what’s Facebook is for.  Likewise, insults and name-calling are best flung on Twitter and if you just need to find a way to cope with a crippling sadness then may I suggest booze and/or religion.

In short, let’s play nice and work together to make the debate welcoming to all and to bring out the best in each of us.