Last week’s article on the seismic shift in film festivals seemed to go down well, in part because it shone a light on the hurdles film festivals face when trying to put on their events.  Therefore, to further demystify film festivals, I present below the full costs and income of the Raindance Film Festival.

I’m very grateful to Elliot Grove for entertaining my crazy request and then for giving me unrestricted access to the festival’s books and accounts.  It’s been fascinating to learn how the festival functions, and I hope you find it as interesting as I have.

The Raindance Film Festival in a nutshell The Raindance organization was founded by Elliot Grove in 1993 to support and train the UK independent film sector, with the festival being launched a year later.  The first festival featured the world premiere of ‘What’s Eating Gilbert Grape?‘ and in its second year they presented the UK premiere of ‘Pulp Fiction‘.

Since 2012, winner short films at the Raindance Film Festival are automatically eligible to be nominated for the Academy Awards (i.e. this puts the filmmaker on the first rung of a long ladder to getting a coveted Oscar).

Elliot gave me a cache of documents and access to online accounts and using that I am able to report on a number of aspects of the festival.  Later in the article I look at how some elements have changed over the past decade or so, but first I want to give you a complete breakdown of the accounts for a single year of the festival.  The 2016 festival hasn’t happened yet, and the 2015 accounts seem to be still in process, so the most recent year for which I have full and complete figures is 2014.

Film festivals are rarely, if ever, run as purely commercial, profit-driven events and my 2013 film festival study showed that just 3% claim to be making a “steady profit”. Therefore, I’m pleased to say that the 2014 Raindance Film Festival made a profit!  Of £19.17. Breaking down the income

Just over a third of the festival’s income comes from submission fees, which are paid by filmmakers when they enter their film for consideration.  Submissions to the Raindance Film Festival have been rising steadily in recent years, and in 2014 they received 3,170 short films, 851 feature films and 122 music videos. For most of the past decade the Raindance Film Festival has used Withoutabox as their sole submission platform, although in 2015 they added the ability for filmmakers to use FilmFreeway to submit. The Raindance team gave me login access to both accounts, meaning I was able to analyse all of their online submissions between 2002 and 2015 (I did not look at 2016 as the season is still open for submissions).

Over the past twelve years, 57.1% of their submission income has come from short films, 41.2% from feature films and the remaining 1.7% from other film projects, such as music videos. 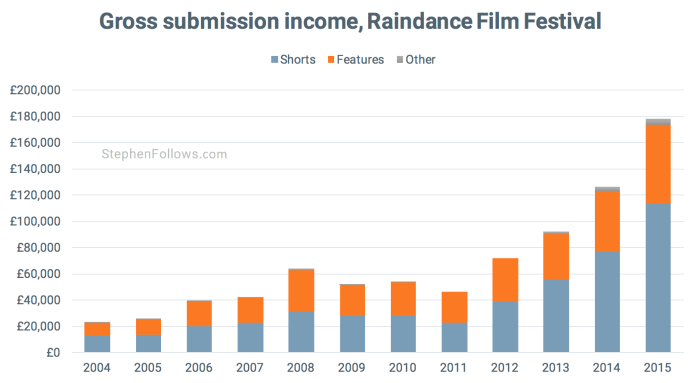 Most festivals charge different submission costs based on the date filmmakers submit their films, and the Raindance Film Festival is no exception.  The cheapest prices apply to the earliest submissions, with the final ‘late deadline’ prices normally being significantly higher.  For example, if you wished to submit your feature film to this year’s Raindance Film Festival then if you did so before 22nd April then you would be charged £50 on Withoutabox and $85 on FilmFreeway.  However, if you wait until the very last minute then you will have to pay £145 on Withoutabox (latest deadline is 17th June) and $155 on FilmFreeway (latest deadline is 10th June).

In addition, each year the Raindance team review their submission fee structure.  Using the data from twelve years of submissions, we can look at the average amount actually paid by filmmakers each year. The average cost of a submission has fluctuated significantly over the years, including a policy change in 2011 to reduce the cost for submissions (in 2010 the average feature cost £93 to submit whereas in 2011 the average was just £45).  This no doubt played a role in the dramatic rise in submission numbers since 2011. Only last week, MovieMaker magazine included the Raindance Film Festival as one of their ‘Festivals Worth The Entry Fee‘.

So far we’ve been talking about the festival’s gross income, from which we need to deduct submission platform fees and then any taxes, such as VAT.  Over the years, Withoutabox has charged a number of different commission fees to film festivals, with some being as high as 18%  However, using the gross and net figures we can see that the Raindance Film Festival paid an average of 11.5% between 2006 and 2015.   In 2006 the Withoutabox fee was 10.1% of gross income, and in 2015 it was 12.0%.  The effective fee charged by FilmFreeway in 2015 was slightly lower, at 9.0%. Income from screenings, parties and passes The core of any film festival is the screening of new, undiscovered films to a paying audience.  The 2014 Raindance Film Festival took place over 12 days (Wednesday 24th September to Sunday 5th October, inclusive) and screenings were held on all but the first day.

In addition, the festival held Opening and Closing Night Galas, netting £5,100 and £1,025 respectively and bringing the total box office to £61,075. The figures above come from the sales of tickets on an individual basis, but the festival also sold ‘passes’ which allowed access to all screenings.  The top pass was the ‘Patron Pass‘ which cost £250 and gave the owner access to all Galas, film screenings, workshops, events, the award ceremony, they received a name check in the festival catalogue and had a behind-the-scenes tour of the festival from Elliot Grove.  There were three other types of passes, and each had discounts for members, seniors and students (see here for a breakdown).  The totals were as follows…

When we combine the tickets sold and the entries via passes, we can see that the 2014 festival had an attendance of 14,166 (10,429 from film screenings and 3,737 from events).  This means that the 2014 attendance figures were more than double those of the 2010 festival. The 2014 Raindance Film Festival raised £82,756 from corporate, trade, industry sponsorship and cultural partnerships.  This 2014 sponsorship income came from just 15 bodies, including Nikon, Viewster, Daily Motion and York University.  The largest of these was £20,000 awarded by the BFI from their ‘Audience Fund‘.  (This figure was halved in 2015 and there are currently no plans for BFI funding for the 2016 festival).

This sponsorship income accounted for 27.5% of festival revenue, much less than the industry average of 43.7%.  This appear to be disproportionately small due to the Raindance festival’s high percentage of income from box office receipts.  Raindance puts on many film screenings and they are relatively well attended by the paying public, possibly providing them better protection from every film festival’s fear of losing one or two large sponsors, leading to the festival having to be cancelled.

The biggest cost – the festival staff

Running a festival is a huge endeavour, and one which lasts throughout the year.  Clearly the busiest times are in the weeks leading up to and during the festival, however the work never seems to stop. For example, let’s look at the task of creating the festival’s schedule of films. Gathering and reviewing submissions begins almost as soon as the previous festival ends.  Submissions are accepted from early November, with the first deadline (the ‘Earlybird’) in late April.  Successive deadlines come and go, with the final late deadline coming in mid-June.  During this time, the submissions team are watching and reviewing films in order to make their final selections.  The short films need to be brought together into curated programmes, such as “Comedy Screen“, “New Waves” and “Desolation Ventures“. The lucky shortlisted filmmakers are informed on 31st August and then the challenge becomes one of gathering all the screening copies for the cinemas. And once they have all played to cinema audiences… it all begins again.

Since 2002, Raindance reviewers have watched 13,234 hours’ worth of movies and for the 2014 festival they had to review 124,898 minutes of footage (i.e. almost three months’ worth, if watched back-to-back).  Using the 2014 net submission income, it works out as 87p per minute of films submitted. The festival paid 21 members of staff, with a combined wage bill of £108,719.  By contrast, the Sundance Film Festival employed ten times as many people in 2013 (232 staff members) whilst only having just over four times as many people attending the festival (attendance of 45,947, versus Raindance’s 10,429).  Elliot Grove was not paid from festival income (although I’m sure he earns something from other Raindance enterprises).  In addition to the paid staff, the festival is supported by around 60 volunteers (Elliot tells me that they receive over 400 volunteer applications each year).

Some of the other costs included…

As we can see, the festival is a large, complex operation, turning over nearly a third of a million pounds every year.  What’s not tracked in the numbers above are the time, energy and passion given by everyone involved.  In addition, it’s not possible to capture just how much fun it is to attend such a vibrant festival of film.

While going through the festival’s accounts and submission records, I realised that there were a load of smaller, tangential things I could research and report on.  Therefore, below there are some random titbits from the past twelve years of the Raindance Film Festival…

Using the film’s loglines (nearly a million words in total), we can see the most popular themes are youth, love and life.  The word cloud below shows the most common words, with the most frequently-used words appearing the largest.

Withoutabox doesn’t ask all filmmakers to list their date of birth, but FilmFreeway does.  Therefore, by using a sample of the 1,507 people for whom we have a date of birth in 2015 and 2016, we can look at how old the filmmakers were at the moment they submitted their film for consideration. The shooting formats of the films submitted to the Raindance Film Festival are a mirror of changing film technology over the past decade. It wasn’t until 2015 that the festival saw more submissions shot digitally than on tape.  The percentage of films shot on film has drastically dropped, from close to 44% in 2003 down to just 3.5% in 2015. Note: Some films mix shooting formats, hence why the totals creep past 100%. In the early days of the festival, a far higher percentage of submissions came from American filmmakers. The median running time of the short films was 13 minutes and 30 seconds, with half of all short films running between 7 and 15 minutes long. 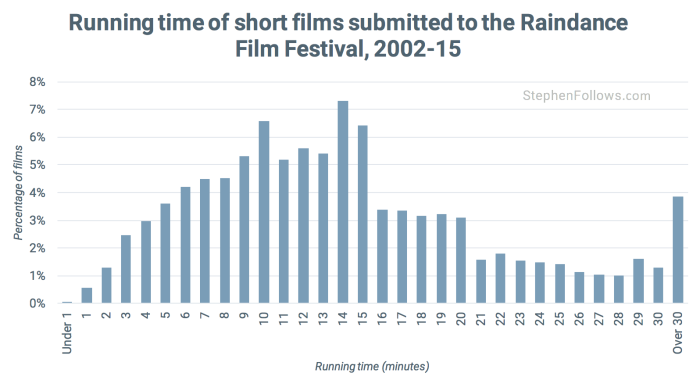 Sadly, the reporting on the features is a little too inconsistent to be able to perform the same analysis. I’m very grateful to Elliot Grove for so generously opening up the archives of the Raindance Film Festival.  He gave me complete, unrestricted access to the data and didn’t prevent me from reporting on any aspect of the festival.

His contribution to independent film in the UK has been immense and spanned almost a quarter of a century, so it’s nice to see that he continues to be open to new ways to help filmmakers.  In our conversation, I asked him if he had any idea how large the festival would become when he set it up and he said…

I knew it was hard. I naively didn’t realise just how hard. Had I realised I might not have done it.

I think all filmmakers can relate to that!  Surely this applies anything worth doing in the film industry, no matter if you’re making movies, running festivals or sitting in cheap seats munching popcorn.

If you’ve found this article useful and/or enjoyable, then please support the 2016 Raindance Film Festival by buying a pass.  Best of all, you can currently grab them for the earlybird price, saving you 20%.  Just visit raindancefestival.org/register-now