As regular readers will know, for the last nine months I’ve been working on a deep and comprehensive study of gender inequality in the UK film industry.

Today I’m pleased to be able to share the results (although less pleased with the content of the results!).

You can download the full report here and I have summarised the key findings in this article.

The report is broken down into three main sections…

The report is 140 pages long and so what follows below is a very short precis.  Each statistic, finding and suggestion is expanded upon in the report, so if anything piques your interest I would suggest you jump to that section of the report.  At the bottom of this article you’ll find a long list of our findings.  Before that, I want to take you on a journey through the process and outcomes of the report.

Women are poorly represented within directors of UK films

Perhaps more problematically, there has not been any meaningful improvement in the representation of female directors in our studied period. In 2005, 11.3% of UK films had a female director but by 2014 this had only increased to 11.9%. Female representation is poor across most of the UK film industry

Data on the crews of the films we studied revealed that the disparity between men and women, although most pronounced for directors, is evident throughout the industry. Of the main key head of department roles, only two had greater than 50% female representation with the rest ranging between 6% and 31%. Similarly, only casting, make-up, and costume departments have a majority of female crew, meaning of the seventeen crew credits we studied, fourteen had fewer women than men. However, the scale of the disparity between men and women in crews was not as stark as that between key creatives, which in turn was not as severe as that between male and female directors. The general trend is for the percentage of women in a given role to broadly be dependent on the seniority of that role. In other words, the more senior a role, the less chance it is held by a woman, and, by extension, the less chance a woman has of being hired for it.

Female representation in key creative roles and among film crews has also stagnated across the last decade. Across the whole of the industry there is no meaningful trend towards greater representation of women or any real improvement in their career prospects.

Over a fifth of UK films receive some form of public funding (development and/or production), and we found that those films had a higher representation of women amongst directors.  However, the overall average hides a clear decline in the support of female directors. In 2007, 32.9% of films with UK-based public funding had a woman director, but by 2014 that had dropped to just 17.0%. We also discovered that the majority of UK film public bodies do not adequately track the gender of applicants and awardees.

UK film students, like the UK population as a whole, are broadly 50% male and 50% female. Similarly, entrants to the film industry are 49% female. 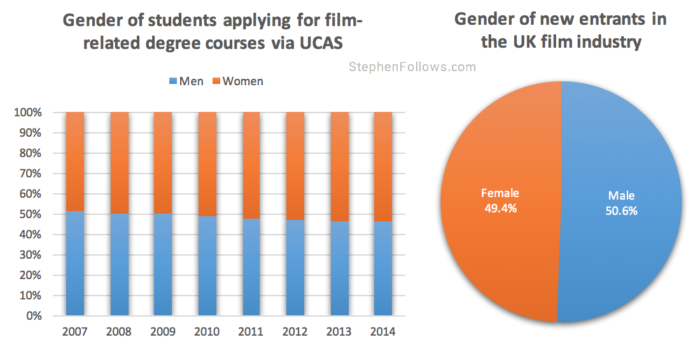 Yet as they begin to progress through their careers and gain the credibility required to launch a directing career the disparity begins to emerge. As we’ve seen, women are already underrepresented in the majority of film crew departments and the difference between male and female representation increases as we progress to key creative roles. Female directors face similar issues in other important stages of their career development: just 27.2% of British short film directors and 14% of drama television directors are female. The report’s findings paint the picture of an industry where female directors are limited in their ability to become directors and their career progression once they do. They are limited in the number of films they can direct as well as the budget and genre of the films they do. They are less likely to be hired at all stages of their careers and find it proportionately more difficult to be hired to senior roles and gain the credibility and experience needed to launch a successful directing career. And there is no meaningful sign of improvement without concerted action to resolve these issues.

The causes of gender inequality among UK film directors We found no evidence that that fewer women wish to become directors than men.  Given the lack of any disparity during film education or at the point of entering the career, the scale of the disparity at later stages in directors’ career progressions and its consistency through careers and across the industry, this explanation simply seems highly unlikely to be even close to a full explanation of the issue.

If the personal choices of women in the film industry is inadequate as an explanation of the disparity between male and female directors then, given individual decisions and contacts are the gate-keepers to progression and success within the industry, whatever the root causes of the inequality are, the point at which they are realised must involve some action of the individuals with power in the industry. In other words, the disparity must be a result of the preferences of those making hiring decisions rather than those applying for those positions.

We found evidence to support this hypothesis in the difference in representation of female employees under female directors and heads of department and their male counterparts. Female key creatives have a notably higher percentage of women in their departments and female directors hire a greater percentage of female key creatives. Hence, the differing preferences of male and female employers is clearly resulting in a difference in their hiring practices.

However, we found no evidence of any organised, conscious or deliberate efforts to exclude women from the industry or certain positions within it. Therefore, it is our belief that the gender imbalance is primarily due to an unconscious bias.

By studying three aspects of UK films, namely audience ratings (popularity), critics rating (quality), and box office (profitability) we were able to show that the evidence available is not adequate to justify any such preference. Meaning that there is no evidence to support the notion that the bias against female applicants is in any way justified.

Hence, the best initial explanation of our findings is that they are the result of a widespread, unjustified, and unconscious bias within the industry. However, this is far from a full explanation. It is important to note we have not seen evidence to support the suggestion that those making hiring decisions genuinely hold such biases in a wider context, and we do not believe this to be the case.

The lack of any trend towards an improvement in female representation, despite the frequent churn of individuals within the film industry, suggests that there are systemic issues which are sustaining and perhaps creating these biases. In simple terms, the individual instances of bias are not the problem themselves but rather a symptom of it.

We identified four principal systemic issues we believe produce, allow, and protect the disparity between men and women in the film industry:

We believe the evidence suggests that these four systemic issues protect and sustain the outdated, unconscious bias of the individuals within the industry, and these in turn result in fewer women being hired and fewer films being directed by women.

We suggest the current vicious circle which perpetuates the under-employment of female directors can be used as the engine of change, becoming a virtuous circle, as shown below.

To this end, we have outlined three solutions to these systemic issues, which we believe would greatly improve the representation of female directors and women in the industry more generally.

In combination, we believe these solutions would go much of the way towards fixing the gender disparity in the film industry. Not only by directly improving the opportunities for female directors and the number of female directed films, but also by removing the systemic issues which propagate inequality in the industry.

Why action is needed What is clear is that without serious, concerted effort to alter the hiring practices in the industry, this is not an issue that will resolve itself. However, the reasons to implement such change are numerous and extend far beyond simply the benefit to women within film itself.

By expanding and diversifying the pool of working directors we increase the range and variety of the films we make and the stories we tell. By shutting out entire segments of society we exclude unique voices and limit the scope of our culture as a whole.

Equally audiences are limited in the films they can see. A male-dominated film industry leads to male-focused films, leaving women not only underrepresented amongst directors but underrepresented in the art and stories themselves.

The film industry benefits hugely by improving the meritocracy of its hiring decisions. By hiring more women in prominent positions we improve the opportunities for other talented women within the industry and create role models to inspire the next generation, further increasing the talent to choose from.

Finally, and most simply, it matters because it is unfair and unjust for any individual’s opportunities to be limited simply because of their gender and because this sort of discrimination is outdated, illegal and immoral.

Film occupies a unique position, sitting at the crossroads between being product and art. It has great influence over what we as a society believe and how we feel about it. It not only responds to but shapes public opinion, and so it has a greater obligation to represent our society as a whole and to project informed, developed beliefs than perhaps any other industry. The disparity between male and female directors and the inequality in the industry more generally means we are failing in this obligation. But it is well within the industry’s power to change this.

Click the chapter titles to read a summary of the key findings within each chapter.

Section A: The Current Landscape for Female directors

The percentage of UK directors who are women

The issue over time

The genre of female-directed UK films

The quality of female-directed films

Female representation among department heads and their crew

The effect of a woman director on overall female representation

Changes in female representation on UK feature films over time

Women within the UK theatre industry

Section B: Why Are So Few Female Directors Hired?

The path to becoming a professional film director in the UK

Entering the film or television industry

The report was only possible thanks to Directors UK, who provided support, resources and advice throughout the process.  It also would not have been possible without the help and support of a large number of people.  Not least, my co-author Alexis Kreager as well as Eleanor Gomes, Alyssa Thorne, Sophie Lifschutz, Edward Dark and the hundreds of industry professionals we spoke to for research.  Thank you all.