The film business has changed more in the past few decades than in any time since its inception.  Technological innovations have massively affected almost every area of the film lifecycle, including:

But there has been one sector whose last major change took place many decades ago – Exhibition. The principles of the exhibition business are simple – screen movies, charge entry and (hopefully) sell your patrons a load of massively marked-up food and drink on their way to the screen.  I’ve heard it described as “Renting seats and selling sugar”. Over the past hundred or so years, there have only been a few changes to the cinema business.

One thing that hasn’t changed for the vast majority of cinema-goers is how they see buying a cinema ticket.  Sure, they can now buy them online, but the principle is the same – when I want a cinema ticket, I buy one.  It’s a demand-led, single-use purchase.  Some European chains have subscription-based offerings but they remain on the margins and are restricted to whichever chain is offering them.

This could be all about to change.

The reason for my equivocation is that right now there is a major experiment going on in the US cinema industry that is likely to have profound effects on the exhibition sector worldwide. A bold start-up is currently revolutionising the way consumers buy cinemas tickets in the US and doing so despite facing some major barriers, not least operating without the support of cinema chains and ignoring basic economics.

The company is called MoviePass and their pitch is simple – a subscription-based service which allows you to see an unlimited number of 2D movies in cinemas for a single monthly price of around $10. Let’s take a quick glance at this service to understand a little more about what it could mean for the cinema sector.

MoviePass has had a number of different guises over the past few years (more info below) but the simplest way of describing it is to talk through the current customer journey: For a fixed monthly fee, users can watch as many 2D movies as they want in standard US cinemas.

Upon joining, they are sent a special MoviePass debit card and access to the MoviePass app.  If they want to see a movie they just show up at the cinema on the day of the screening, open the app and select the screening.  Their special debit card is then loaded with the exact amount of money the cinema ticket costs and they buy it from staff as they normally would.

On the one hand, this is a fairly predictable move.  The success of services like Netflix and Amazon Prime have shown how willing consumers are to pay a subscription fee in return for “unlimited” access to content. So you could say that this is just the exhibition sector catching up. On the other hand, this is a bold and radical idea.  It’s a sector which is not used to change and it’s being done against the expressed wishes of the cinemas in question.

The people behind MoviePass are not amateurs; they come from major companies in both the movie and tech worlds. Their CEO, Mitch Lowe, was a co-founder (and ex-Head of Business Development) of Netflix and also worked as COO at movie rental firm Redbox.  MoviePass’s COO, Stacy Spikes, was formerly a vice-president of Marketing at Focus films, Miramax and Columbia Records.  Their principal investor (and Chairman of the Board) is Chris Kelly, who was previously Facebook’s Head of Global Public Policy and is now a serial entrepreneur.

MoviePass’ success has been rapid.  Data is hard to come by as they’re a private company, but based on the numbers they have published, the chart below shows their recent subscriber growth. There is a lot to discuss with MoviePass but in an effort to keep it simple, here are the five things I think are important:

I’ll now go through each of them in a little more detail.

1. The market they’re currently going after is massive 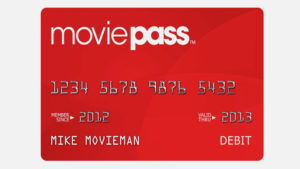 SEC filings by Moviepass reveal the scale of their ambitions.  They quote MPAA figures in describing the US cinema market as having 36 million “avid” moviegoers and a further 246 million “causal” movie goers.  This adds up to an annual US box office gross of over $11 billion.

As their CEO puts it: “With MoviePass, there’s no movie ticket prices to think about – going to the movies will become an everyday experience rather than an occasional treat“.

They also point out that the US movie concession market (i.e. food and drink) is worth an additional $5- $7 billion each year.  To date, they have only used this figure to make the case to cinemas how any MoviePass-led increase in cinema attendance doubly helps the cinema’s bottom line, but I’m sure that if they win their current battle for control of admissions, they would start to eye up the concessions sector somehow.

MoviePass claims that their systems benefit all major players in the theatrical market, namely:

And it’s that last point which is the holy grail of MoviePass’s long-term success.  It’s all about the data.

Current movie marketing is hit-and-miss: expensive and wasteful.  Only about 10% of the US population are classed as “avid” moviegoers and yet are the people studios rely on.  In order to reach these people, marketers have to run broad campaigns via television adverts, outdoor posters and PR activities – all of which are wasted on most of the people who see them.

The problem is compounded when you have a niche movie which would appeal to a smaller subsection of the population and doesn’t justify a massive marketing spend.

A further problem for movie marketers is that there is very little continuity in marketing across multiple movies.  Disney knows that around 67 million people bought a ticket to see Star Wars: The Last Jedi but they don’t know who those people are.  So they can’t reach out to those people in the future to sell them a tie-in, home version of the movie or to promote the next Star Wars instalment.

In theory, MoviePass could change that.  Their consumer base is their principal product and they could sell access to the highest bidders.  One only need look at what consumer data has done for Facebook to see the power of providing marketers with highly-targeted advertising options.

2. The cinemas are not happy You could take the view that the cinemas should be happy with this new innovation.  It costs them nothing, drives new full-price ticket sales and herds more hungry/thirty people past their overpriced concession counters.

But it’s not the short-term that worries the cinema chains, it’s what this means in the long-term.  A successful and powerful MoviePass could cause trouble for cinemas in a number of ways:

Despite their objections, there doesn’t seem to be much the cinema chains can do to prevent consumers using MoviePass.  When MoviePass dropped their prices to $9.95 last summer, AMC said:

We are actively working now to determine whether it may be feasible to opt out and not participate in this shaky and unsustainable program… AMC believes that holding out to consumers that first-run movies can be watched in theaters at great quantities for a monthly price of $9.95 isn’t doing moviegoers any favors. That price is unsustainable and only sets up consumers for ultimate disappointment down the road.

We pay full price for the tickets we buy. We comply fully with the rules of MasterCard and AMC has signed agreements with both their credit card processor and with MasterCard to comply with all the rules. They would essentially have to not take MasterCard in order to block us. I don’t think you can cancel that agreement without severe penalties.

It seems that the only chance cinemas have to avoid an all-powerful MoviePass is to hope that the economics of their model forces a rethink before they become a sustainable business.

3. MoviePass is connecting with people who cinemas are struggling to reach MoviePass appeals to a group of consumers who cinemas (and Hollywood studios) have been struggling to attract – millennials.  In previous articles, I’ve shown how the cinema audience is ageing (here, here and here) and how the loss of young people is the biggest fear of many cinema owners.

About 75% of MoviePass’ users are between 18 and 34 years old and their CEO was quoted as saying “Millennials understand us because they grew up on subscription“.

The New York Times spoke to one such millennial MoviePass user who had previously visited the cinema for “maybe one movie a month” but who watched twelve movies in the month of November 2017, thanks to MoviePass. He said: “I used to only go if it was clearly worth buying a ticket — something big-screen worthy, a spectacle or a movie with a lot of effects. I would skip the undercard movies. I would just wait until they came out on Netflix“.

So this is a double win for the cinemas and Hollywood – they have a way to connect with a hard-to-reach group, and they are better insulated against the poor performance of a bad movie.

4. It’s not as “unlimited” as it at first seems 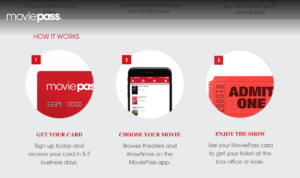 The sell of “unlimited movies” is very enticing but, as always in life, terms and conditions do apply.  Among the factors holding you back from seeing whatever you want are:

5. MoviePass faces some huge obstacles ahead If MoviePass is to flourish, it will need to overcome (or continue to ignore) a number of pretty major problems, including:

MoviePass CEO Mitch Lowe is not fazed by his critics, and cites his experience in co-founding Netflix: “When we launched Netflix, Blockbuster said, ‘This is a ridiculous idea. You’re going to create confusion in the market. You’re never going to make it“.

What’s the positive case for MoviePass?

Morgan Stanley have said that they think about two-thirds of the current US movie-going population could eventually become MoviePass subscribers.  And if MoviePass manage to reach 20 million users, Morgan Stanley predicts that the service would control 27% of all US cinema tickets sold.

In a sperate bit of analysis, Seeking Alpha predicted that if MoviePass reaches that 20 million subscriber milestone, then the company will be worth $10 billion.  A new Netflix- or Amazon-style force for the movie world to learn to deal with.

As regular readers of the blog will know, I’m not one for brevity.  And so, in that spirit, I have written an edited timeline of how MoviePass got to where it is today.

A Bloomberg report in August 2017 claimed that MoviePass was planning to go public in “March 2018”.  As today’s article is being written in February 2018, only time will tell if this prediction turns out to be true.  They have also discussed an Initial Coin Offering (ICO), in which the company would use blockchain technology to sell virtual “coins” which can be redeemed (or traded) at a future date.

The data for today’s piece came from press reports, SEC filings and press releases by the companies involved.  I have tried to provide links within the article to each source.  If you want to read an exhaustive list of MoviePass press coverage then I recommend Crunchbase’s collection.

I have no idea if MoviePass will work in the long-term.  It’s clear that their current model is unsustainable but some of the world’s most valuable companies started out as growth-obsessed loss makers.

If I were given the chance to buy shares in MoviePass right now, I don’t think I’d take it.  But neither would I buy shares in any major US cinema chain.  This normally quiet sector of the film world has suddenly become impossible to predict.