Last year I looked at the business side of the Cannes experience, measuring the number of people who attend each year and how many films are shown in the market. So this year I thought I would focus on the artistic side of Cannes – i.e. the films selected to be ‘In Competition’.

What types of films are shortlisted for a Palme d’Or?

In a word: Dramas.  Since the inception of the festival, 84% of all films have had drama as one of their principal genres (in my analysis, I permitted films to have up to three genres).  This has increased in recent years, with drama accounting for 93% of the films shortlisted in 2010-15 inclusive. Does it help to be French? 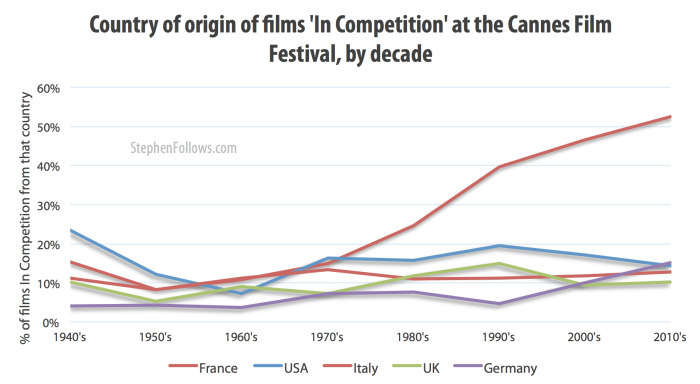 I have not watched every Cannes-nominated film (they’re next on my Netflix list after I finish House of Cards) but I was able to get the official plot summaries for each from the Cannes website.  By removing common English words (like, the, of, a, etc) we are able to get a snapshot of what is going on in Cannes nominated films (1939-2015) – the larger the word, the more popular it is. Although the films in Cannes may seem a world away from the typical Hollywood blockbuster, in many cases they will be using the same PR companies to generate ‘buzz’.  Premier PR handle events for films such as Iron Man 3 and the new Star Wars films but in the next few weeks they will also be managing the image of three of this year’s shortlisted Cannes films. Picture the scene… You’re in a huge exec’s office (both the office and the executive are huge) and you have been asked if you want a glass of water four times.  The time has come:  you have one shot at pitching a sure-fire art-house smash hit.  What’s your pitch?

Next week I’m going to be looking at the filmmakers behind the films which succeed in Cannes.  I will also be on the Croisette by then so if you want to meet up then drop me a line.