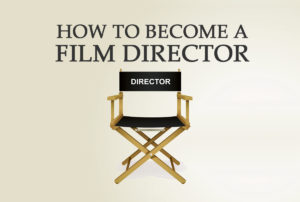 Last week saw the publication of my report ‘Cut Out Of The Picture‘, which looked at gender inequality in the UK film industry.  In the process of researching and writing the report, we spoke to over 200 film professionals about how someone becomes a film director.  I thought aspiring film directors may benefit from a distillation of what we discovered, so please find below a mix of data and advice.

Our study looked at every film produced in the UK over a ten-year period (2,591 films), and we then conducted detailed interviews with 6% of those directors (121 directors).  The career paths detailed below only relate to people who actually directed a feature film in the UK between 2005 and 2014, inclusive.

There is no one route to becoming a film director When I started this process, I had hoped to find a small number of clear routes into directing which most people followed.  Instead, I found that every director had their own unique career path and as a result it’s not been possible to provide a neat summary, the way one would for becoming a lawyer or a doctor.  Instead, it’s probably more useful to see your route into directing as gathering a collection of skills and experiences which will equip you for the path ahead.  You don’t have to do any one particular element, but some are unquestionably more useful than others.

In this article, I’m going to focus on what the current crop of film directors have in common, and the advice they themselves would give a new entrant.  These are the things you can learn to improve your chances of having a career.  However, I would be remiss if I didn’t at least briefly mention the things you cannot affect.  It’s a sad truth that in the current film industry it is hugely advantageous to be white, middle class, male and living in London.  While there are no explicit barriers put up against people who fall outside of these criteria, many of the battles they face will be slightly harder.  There is currently a lot of talk in the industry about addressing these inequities and hopefully some of this talk will lead to action.  Time will tell, but in the meantime, do not be discouraged.  There is still a huge amount you can do to improve your chances of getting hired. There are no ‘necessary’ qualifications to becoming a director; you don’t have to have a certain level of education, you don’t need to pass an entry test (such as the Bar exam for lawyers) and you don’t need any kind of professional membership (such as a union card).  However, you do eventually need to convince producers, financiers, public funding bodies and other gatekeepers that you’re a director worth supporting.  This mammoth challenge can be broken down into three smaller challenges…

Although these challenges may sound woolly, they are the best summation of how directors get hired.  Each person tackles these challenges in a slightly different way and some directors rely on one more than others.  For example, some directors focus mostly on their craft, meaning that it takes them longer to get known, but once they are discovered they tend to rise more quickly.  Others focus on the way the industry functions, learning the film business and creating a product which sells.  Finally, some directors spend their time schmoozing and working their way into the right rooms of financiers and funding bodies.

If you’re starting out then consider which of those three best suits your personality – know when you’re at your best and try to improve on the area(s) you are lacking in.  Which are going to excel at – the art, the system or the people?

The most common paths to becoming a film director

Although the directors I interviewed each took unique journeys into feature film directing, many shared steps along the way.  I analysed the routes they took and noted which similarities kept cropping up. The most common paths included studying film on a long course (i.e. at least a year), directing short films and working in some capacity on television or as a crew member on other people’s film projects. 16.5% of interviewed directors said they moved straight into directing, although this was invariably after having worked for a time in another industry.  If you hope to go straight into directing without having done anything else before, then I suggest you open your cheque book as you will likely have to pay for your first film’s entire budget yourself.

Level of education prior to entering the industry

The current crop of film directors are an educated bunch, with four out of five having at least one university degree.  However, only a 29% of those with a degree studied film as their principal subject. 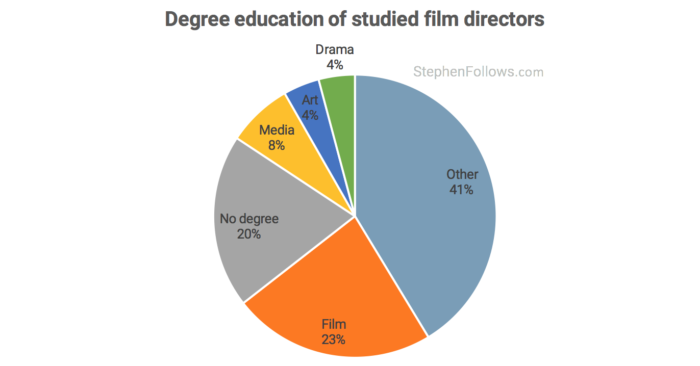 Working in the film and television industry prior to directing

The vast majority of people who become directors do so via entering the industry as a runner, the lowest level job.  In the past, I’ve looked at how film employers find and select their new entrants and as the graph below demonstrates, the most important factor in being hired is ‘having a driving license’ – so we can add this as a useful qualification when starting your journey towards becoming a film director. After getting a foothold in the industry, many future directors work their way up to directing via other positions. I asked my interviewees which jobs they held in the film or television industry prior to becoming a film director and received 57 different positions.  The most common were (in order)…

Turning your first directing gig into a career

Once you have managed to direct your first film, the battle is far from over.  In fact, four out of five people who direct a UK feature film don’t go on to direct a second. This is due to a number of reasons – not all of which are bad.  Some people find that they don’t enjoy directing, others are directing purely to promote their other skill (such as writing or acting), while others still forge a successful directing career in television.  That said, a fair number of the people who make only one film do not do so purely out of choice.

Therefore, what can film directors do to maximise their chances of turning a one-hit wonder into a fully-fledged career? The answer, according to a 2015 Olsberg SPI report, is to achieve success in one of three ways…

This means that if your debut film did not wow audiences, critics or your investors, then you need to work to create a ‘buzz’ around you and your career.  The report puts it like this…

…some film-makers can draw ongoing interest from the industry even if their debut film did not perform to above average levels. This is partly due to key UK funders seeking to develop relationships with career film-makers outside of commercial pressures. This can afford a director some degree of insulation from the realities of the performance-led funding approach of the commercial marketplace, instead able to fund a second (and sometimes further films) based on perceived artistic value or latent promise.

In short – be a successful artist, make a profit or just look like a success.  Fake it until you make it is a useful mantra in all areas of the business, it seems.

In my interviews with working film directors, the same pieces of advice kept cropping up.  Therefore, here are the five most frequently uttered words of wisdom for wannabe-directors, along with some verbatim quotes from directors. Direct as much as you can – short films, web content, anything you can get your hands on. Hone your craft, including by doing related work. Spend time getting to know the industry and networking. Never give up despite how hard and depressing it can seem at times. It’s worth noting that this article represents the career journeys of current film directors, meaning that it reflects the film industry as it is now, not as it may be in the future.  If you are an 18 year-old currently struggling to work out what path to take to become a professional film director then bear in mind that, if you’re successful, the industry you work in could differ from the industry illustrated above. For example, no-one we interviewed stated that they got into professional directing by running their own YouTube channel, and yet I have no doubt that some of the current YouTube superstars could turn their hand to directing quite successfully.

So take this advice as guidance only.  If you see new routes opening up then don’t ignore them just because they were not listed above.  When film is at its very best it’s about taking risks, doing something new and constantly innovating.