How do British films fare at the Cannes Film Festival?

16 May '16 2 Comments on How do British films fare at the Cannes Film Festival? 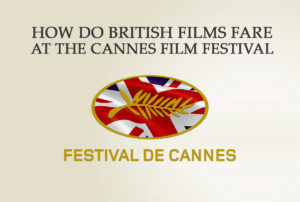 Two of this year’s hottest festival films are British films, American Honey from Andrea Arnold and I, Daniel Blake from Cannes veteran Ken Loach, both of which are up for the highest award in Cannes, the Palme d’Or.

One in five wins and one in ten nominations

Since the first Cannes Film Festival in 1939, 159 British films have been nominated for a Palme d’Or.  In fact, out of the 69 festivals to date, only 14 haven’t featured at least one British film ‘in competition’.

While under 10% of Cannes-nominated films have been British, over 18% of wins have gone to British films (16 films at the time of writing), meaning that the Brits seem twice as good at winning than taking part. The British share of Palme d’Or wins grew significantly towards the end of the last century, and from 2000 and 2010 included, British films took 30% of Cannes wins (but still only 9.5% of the nominations). At first glance it may appear that Brits are currently performing below average by the measure of their share of Palme d’Or wins.  However, if either of this year’s two British entries win, it will take our share of winners in the 2010s from 17% (i.e. winning one out of six awards 2010-15) to 29% (i.e winning two of the seven awards 2010-16).  If this happens, then the 2010s would almost match the Brits’ best decade to date, the 2000s. Ken Loach is by far and away Britain’s most prolific Cannes director, having been nominated 13 times, including this year.

Other directors who have had repeated Cannes nods include James Ivory and Mike Leigh (with five nominations each),  Lindsay Anderson and Peter Greenaway (with four nominations each) and three apiece for Joseph Losey, Nicolas Roeg, Alan Parker, Jerzy Skolimowski, Michael Winterbottom and Andrea Arnold. According to film critics, the best British film to be nominated at the Cannes Film Festival appeared last year and was Todd Haynes’ Carol.

Although the film came from London-based Number 9 Films, Carol is set in 1950s New York, was directed by an American and starred Cate Blanchett, Mara Rooney and Sarah Paulson.  Therefore, I suspect that few people would have pegged Carol as a British film.  This raises an interesting question – what exactly do we mean when we say a film is ‘British’.

For this article, I’ve sidestepped the philosophical debate by using the nationality classification stated in the official Cannes festival programme.

Notes on British films in Cannes

Had I used IMDb to determine the country of origin, I would have had to include an additional 43 films within the count of UK films at Cannes. For example, in this year’s competition, IMDB and Wikipedia credit three films as coming from the UK (I, Daniel Blake, American Honey and Loving) whereas in the official Cannes site it’s just two (I, Daniel Blake and American Honey). One of the features of Cannes is the International Village, where most countries have a tent to promote their country to the industry and also provide a home for native filmmakers.  The UK tent is notorious for housing UK-based filmmakers who spend the whole festival just talking to Brits who live and work in the same town as them.

If you are feeling like you’re missing out on the Cannes experience this year then fear not – I have started to jot down some of the things I’ve overheard said in the UK tent.  I promise these are verbatim conversations by British filmmakers in Cannes…