24 March '14 12 Comments on Do film critics and film audiences agree? I’ve always wondered if film critics are biased towards certain types of movies, so I thought I would take a look at what the data can tell us. I looked that the 100 highest grossing films from each of the past 20 years, which gave me 2,000 films to study. I then cross referenced data from IMDb’s user votes, Rotten Tomatoes’ audience percentage, Metacritic’s Metascore and Rotten Tomatoes’ Tomatometer. In summary…

Do film critics and audiences rate in a similar way?

No. Film critics’ and audiences’ voting patterns differ in two significant ways. Firstly, critics give harsher judgements than audience members. Across all films in my sample, film critics rated films an average of 10 points lower than audiences. This pattern was repeated on Rotten Tomatoes. Unlike IMDb and Metacritic, Rotten Tomatoes measures the number of people / critics who give the film a positive review. Half of all films received an audience rating of between 47% and 76%, compared with 28% and 73% by film critics. Do audiences and film critics share the same favourite films?

No. All segments of audiences put The Shawshank Redemption as their top film but it doesn’t even make it into the film critics’ top ten (it’s at #125 out of the 2,000 films I investigated). Do the most financially successful films get the highest ratings?

Yes. I charted film ratings against the ratio of North American Box Office gross divided by the production budget (as I feel this gives a fairer representation of a film’s performance than just the raw amount of money it grossed). Do film critics and audiences agree which companies distribute the ‘best’ films?

Yes. Films distributed by certain companies consistently get the best reviews. This is not hugely surprising as we have already seen how film critics favour certain types of films and distribution companies tend to focus on certain types of films. Looking at company credits in all four scoring systems, Focus Features took the top spot, with Fox Searchlight second and Miramax coming in a close third. 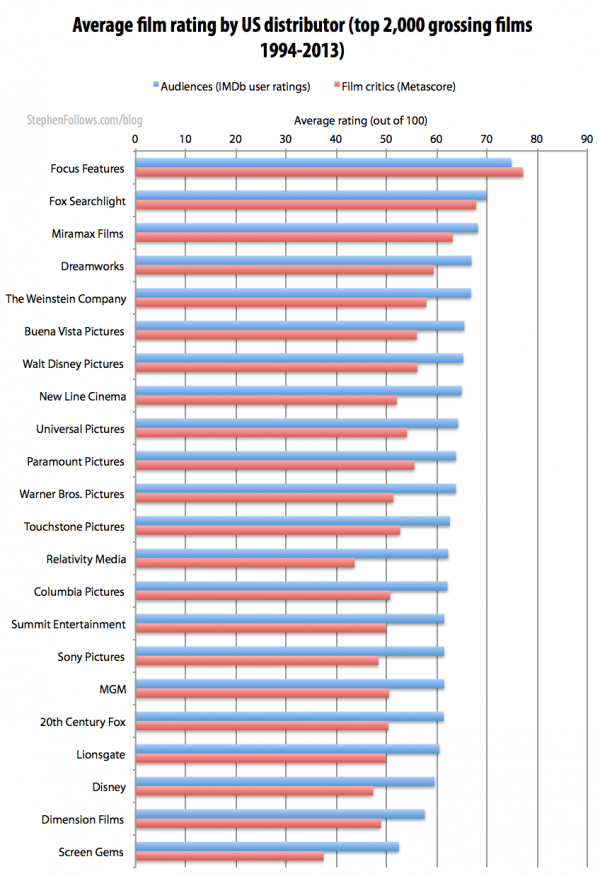 Do critics and audiences agree which companies distribute the ‘worst’ films?

Yes, although there is less consensus than for the ‘best’ films. Films distributed by Screen Gems received the lowest scores on IMDb, Metacritic and the Tomatometer (they were second worst for audiences on Rotten Tomatoes).

Although the league tables of companies listed above are pretty similar, audiences and critics disagree about how good the ‘best’ are and how bad the ‘worst’ are. Film critics absolutely love films from Focus Features, to the extent that Focus is the only company whose films score higher with critics than with audiences.

Similarly, on Rotten Tomatoes, films by Screen Gems received positive reviews from 54% of audiences and only 28% of film critics.

Who is voting on IMDb? Rotten Tomatoes appears to be better than IMDb at representing women

Rotten Tomatoes does not offer a split by gender. However, by comparing the gender breakdown on IMDb votes we can speculate that they have a more equal gender split than IMDb’s figure of 80% of votes coming from men. My deduction is due mostly to there being many female-skewed films in the Rotten Tomatoes audience top 20, including Life Is Beautiful, The Pianist and Amelie (see earlier in this article for female Top 10 films).

Who works at IMDb?

In the breakdown of user votes on IMDb, they mention votes by IMDb staff. I wouldn’t worry about IMDb staff votes skewing the overall score as they accounted for only 0.01% of the total votes cast. But this let me have a quick bit of fun looking at what this information reveals about the kinds of people who work at IMDb. The voting patterns indicate that IMDb staff are…

If anyone from IMDb is reading this, please can you do a quick straw poll in the office and let me know how far off I am? First one who does gets a limited edition Blu-Ray of Showgirls (as a back-up for the one you already own).

Methodology – The scoring systems I studied

I used four scoring systems to get a sense of how much “the public” and “the film critics” liked each film. In the blue corner, representing “The Public” we have…

And in the red corner, defending the honour of film critics everywhere, are…

Both of the Rotten Tomatoes scoring systems look at the percentage of people who gave it a positive review, whereas IMDb and Metacritic are more interested in weighted averages of all the actual scores. This led me to wonder: are the ‘public’ and two ‘critics’ systems interchangeable? No. On the surface they seem similar but in the details they differ wildly.

Each system is valid but they should not be compared with one another.

There are a number of limitations to this research, including…

This is yet another topic where I got a bit carried away. It was fun to get a window into the tastes of different groups and to spot patterns. I have a second part to this research, which I shall share in the coming weeks. If you have a question you want me to answer with film data then please contact me. And if you work for IMDb – I’m serious about the Showgirls Blu-ray.