Today’s article is looking at the recent decline in the number of films being made in the UK, specifically the dramatic fall in low-budget film productions.  Every year the BFI publishes a Statistical Yearbook, which is a collection of facts and figures about the UK film industry.  For the fourth consecutive year, they have recorded a fall in UK film production and the number of films being made on under £500,000 has fallen by 50% between 2010 and 2014.

In order to work out what’s going on with low-budget film, we need to define what types of films are made in the UK… Thanks in part to the popular UK Film Tax Credit and to the quality of UK crew and facilities, the UK has seen a steady growth in inward investment films.  The majority of these are American films from Hollywood studios, although in the past there have been a number of projects from India.  In 2014, 17 out of the 37 ‘inward investment’ films had budgets of over £30 million. Co-productions are a method by which filmmakers can have their film officially classed as having multiple nationalities in order to access funding and tax benefits from more than one country. Co-productions are only possible if the two countries involved have a bilateral treaty (the UK currently has treaties with Australia, Canada, China, France, India, Israel, Jamaica, Morocco, New Zealand, the Occupied Palestinian Territories, South Africa and is soon to be signing one with Brazil) or if both countries are signed up to the European Convention on Cinematographic Co-production.

Co-productions have declined sharply in the UK since a change in the law which limited the amount co-productions can claim back via the UK Tax Credit to a percentage of the UK spend, not the whole budget.  In 2014, co-productions accounted for 14% of films made in the UK. All films shot in the UK contribute to the UK film economy but when most people use the term “the British film industry” they normally are referring to domestic UK films.  These are films made by UK productions companies, largely financed by private individuals and without support from Hollywood studios.

Between 1994 and 2010, UK domestic production increased ninefold, from 33 films in 1994 to a staggering 306 films in 2010.  This was in part due to a dramatic fall in the cost of making a feature film and to the increase in the level of government funding available, via the UK tax credit and its predecessors.  (Another factor is the support given by Lottery-funded bodies such as the UK Film Council, the BFI and regional screen agencies but it’s hard to be able to pinpoint what impact they have had on production levels). 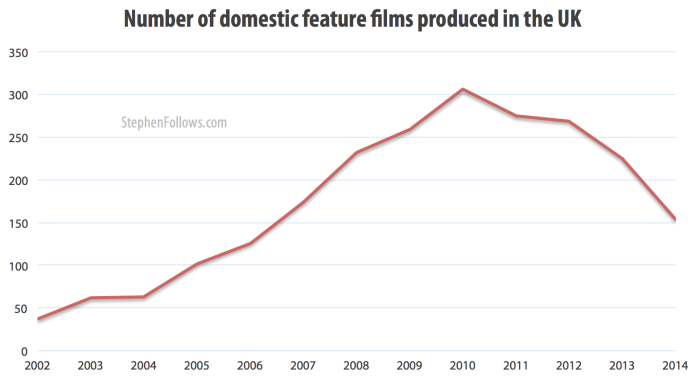 The decline of the past four years To be honest, I’m not sure.  The decline could be down to a number of factors. The first of which is underreporting.  Today’s figures come from the BFI who do a marvelous job tracking UK film productions and each year they publish a review of the previous year’s figures via their Statistical Yearbooks (i.e. the 2015 Yearbook contains the figures for films shot in the UK during 2014).  There is no legal requirement for filmmakers to inform the BFI of their production and so the BFI has to use a number of sources to generate these numbers.  In many cases, the first the BFI hear of a film is when the production company applies for tax relief via the Cultural Test, which can only happen after the film is complete.

This means that with each new edition of the annual Yearbook, the BFI revise their figures from previous years.  For example, the 2011 Statistical Yearbook listed 275 films as having been shot in the UK in during 2010 but by the time the 2015 Statistical Yearbook had been published, the 2010 production figure had risen to 373 films.   I took a look at the changes in production data for the past five years and found…

So, if the current pattern continues then we should expect the official count of the number of films made in the UK in recent years to be revised upwards in coming Yearbooks.  Using the historic patterns, I have projected how the production data for 2008-14 will look in the fullness of time. And this underreporting is most acute in low-budget film, due to the challenges in finding these productions before they are distributed, screened at film festivals or apply for their tax rebate upon completion. (This all leads to a philosophical question… If a micro-budget film shoots in the forest but there’s no-one there to distribute it, is it really a film…?)

So even when we take into account underreporting, low budget film in the UK have experienced a sharp decline, from 307 in 2010 to 216 in 2014 (both projected figures, as detailed above).  Other reasons could include…

But these are just my theories.  I am keen to hear what readers think about this recent decline.  Feel free to leave a comment below or contact me directly.

It should be noted that a decline in the number of feature films being made is not necessarily a bad thing. Many industry professionals felt that the recent boom in filmmaking was harmful to the industry as it flooded an already crowded market and hurt the image of film as a viable investment.  In addition, many of the films made on the smallest budgets involved people working for free and/or in unprofessional environments.

Personally I don’t see an increase or decrease in UK film production as inherently good nor bad.  I think it’s important that our industry is inclusive and allows people from all backgrounds to get involved if they want.  There’s no doubt that too many films being made is harmful to the industry but I like to think that the industry is more accessible than in the 1990s where feature filmmaking was the preserve of the connected, the rich and the crazy.