Last week I looked at the volume of articles published by major film industry news publications.  This week I have built upon that information to uncover the film industry’s most shared, liked and tweeted articles. I studied all 239,720 articles published by Deadline, the Hollywood Reporter, Indiewire, Screen International and Variety between 2012 and 2014. In summary…

Variety is the publication with the largest presence on Facebook. This graph combines article likes, shares and comments to generate a figure for ‘Facebook activity’. In 2014, Variety stories received an average of 1,009 Facebook activities across all articles, compared with 854 for the Hollywood Reporter, 257 for Indiewire and 43 for Screen International. As detailed at the end of this article, Deadline reorganized their site in August 2014 and their average Facebook activity for September to December 2014 was 743. 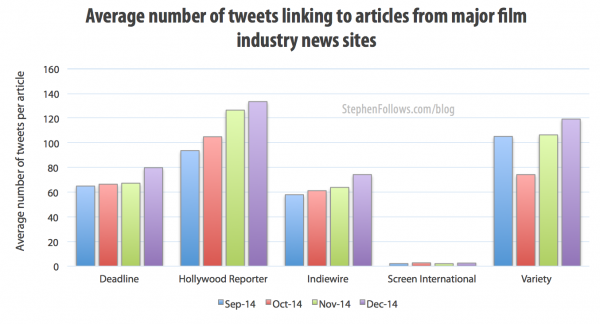 What’s in a headline?

I thought it would be fun to try and get a sense of what each site was publishing.  The article text was too voluminous to study (the Hollywood Reporter articles came to 38.2 million words alone!) so I focused on the headlines. 7% of Hollywood Reporter headlines included the word ‘exclusive’, compared with 3% at Indiewire, 2.4% in Variety and 0.3% in both Screen International and Deadline. As you can see above, the word ‘dies’ is a popular word in Variety headlines.  In fact, it is Variety’s 20th most commonly-used word and appears in 2.5% of all their headlines.

Most tweeted articles in the film industry press

During the period I studied, actor Jon Voight wrote just two articles (identical pieces appearing in the Hollywood Reporter and Variety) and one of those articles is the second on the ‘most shared on Facebook’ chart.  This means that Jon Voight is by far and away the author whose writing has the largest average ‘Facebook share count’ in the film industry press, with an average of 24,159 Facebook shares per article published.  The second author on that scale is comedian Chris Rock, with 11,594 shares for his piece on race in the industry. The most shared articles on Facebook have two major themes – death and politics.

There were some articles which had a large number of Facebook comments but few ‘likes’ or shares.  I have dubbed these the ‘most controversial articles’ as one would expect that if the commenters were all adding words of support then they too would share or like the article.

From next week I will start sharing the results from a big study I performed into film schools.

Do NOT follow this link or you will be banned from the site!