What genre are british films?

21 October '13 6 Comments on What genre are british films?

Recently, both Catherine Rampell from the New York Times and Ted Hope have published interesting data on genres. Catherine Rampell looked at how audiences and critics typically rate genres differently – the genre they disagree most about is romantic comedies. On Ted Hope’s Filmonomics blog, Colin Brown showed how investors are four times keener to invest in comedies than LGBT and faith-based films. To join in the debate, I’ve had a look at genre from the point of view of the UK film industry.  In summary;

What Genres Are British Films?

By number we’re making Dramas, Comedies and Documentaries, although the highest spend is on Action, Fantasy and Sci-fi films.

Comedy brings in the most money, closely followed by Action and Animation. Although a huge number of the films on theatrical release are Dramas (over one in four), they account for only 7% of the UK Box Office. Every year since 2004, Comedy has been the biggest draw for Home Video physical sales (VHS, DVD and Blu-rays). 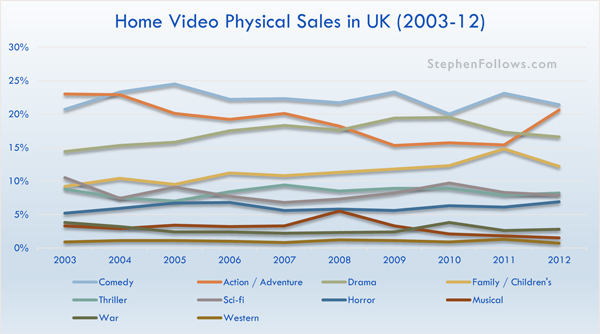 Physical rental is a waning business but this data may prove useful in predicting what will perform well on emerging platforms, such as iTunes and other Video on Demand services.

Today’s British film data was brought to you courtesy of the BFI/UK Film Council, Kantar Worldpanel, British Video Association, Official Charts Company, Rentrak, BBFC, IMDb, EDI and the letter Q. Apologies for the jpeg graphs; my normal fancy method isn’t very good at showing this much data and so I resorted to Excel. Dammit Jim, I’m a producer not a designer.