How many movie producers does a film need?

17 March '14 11 Comments on How many movie producers does a film need? A few weeks ago I looked at how big each of the main departments are on a feature film. It was a very popular article and led to a bunch of questions from readers.

Over the next few months, between other topics, I’ll see if I can address those questions. First up: producers. I looked at the producer credits on the highest grossing 100 films of each of the past 20 years, giving me a pool of 2,000 films to study. 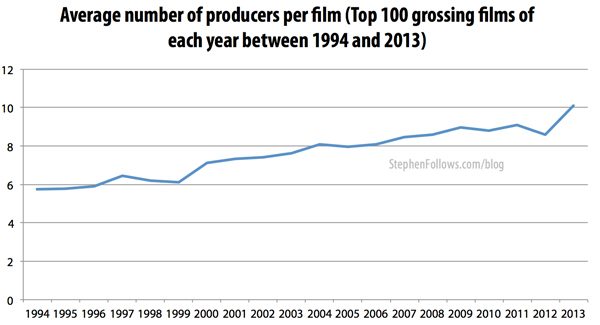 Revenge of the Executives

In the mid-to-late 1990s, there were an average of just under 2 executive producers per film. In 2000, the number jumped to 2.5 (more than the number of standard ‘producers’) and it has been rising ever since. In 2013, there were an average of 4.4 executive producers per film, compared with 3.2 standard ‘producers’. What is a Producer, anyhow?

The exact title given to a producer is not regulated by any union or guild, unlike writers and directors in the States. The end result is a whole cavalcade of producing titles and no agreed standard. While some people may be credited as co-producer on one project, the same responsibilities might receive an associate producer credit on another.

Each company or studio will have their own rules but they don’t seem to match up with each other. Generally speaking, I’d say that producing credits break down as follows…

Ok, ok, the last one is only half true. The ‘associate producer’ credit has been devalued over time and in many quarters it’s seen as a worthless credit given to those who you need to placate in order to make the movie. That ‘secretary’ joke comes from David Mamet’s glorious film ‘State and Main’ which follows a huge Hollywood production shooting in a small town. Interestingly, the data shows that the average number of associate producers per film has barely changed in 20 years (1994 = 0.9 per film, 2013 = 0.8 per film).

Films at Warner Bros. and Walt Disney have more ‘executive producers’ than standard ‘producers’. Taking into account the questionable nature of ‘associate producer’ credits mentioned above, they are rarer on 20th Century Fox films than they are on Disney films.

The independent sector, (defined as films made without backing from one of the six major studios), hires the most executive producers (on average 3.3 per film, compared with Hollywood’s average 2.6 per film). Do larger films have more producers?

No. There isn’t a correlation between the size of the budget and the number of movie producers. No. But to be fair, nor does it appear that more producers are a hindrance. I cross-referenced the number of movie producers with the gross box office performance of the films and found no clear pattern.

I also looked at the ‘budget to box office ratio’ to rate films based on how well they performed in relation to their budget, but still no pattern emerges. This is not surprising – clearly it’s the quality of movie producers that matters, not the quantity.

Credit where credit is due

Within my 2,000 films there were 202 producer credits that didn’t fall into the main types listed above. Some of the those included…

How many movie producers is too many producers?

This data is based on publicly available information, such as Opus and IMDb and so there may be some reporting bias, especially towards the older films.

I’m aware that this article might elicit some good producer jokes so I thought I’d get in there first. I’ve previously tried to find the collective noun for a bunch of producers (A crook? A scourge? A pride? An ostentation? A cluster-fuck of producers?) so let’s end with some old school gags…