How original are Hollywood movies?

8 June '15 9 Comments on How original are Hollywood movies? A while ago I looked at the source of Hollywood films, to see what existing material they were adapted from.  It’s a topic I continue to get questions about; specifically about the number of sequels, spinoffs and reboots in Hollywood today.  Therefore, I’ve decided to take a more detailed look at the lineage of the top grossing Hollywood films.

What does “original” mean?

Most film awards make a distinction between adapted screenplays and original screenplays, including the Oscars.   For the purposes of this research I have classified a film as “truly original” if it…

I created this distinction as the standard Hollywood definition of an “original screenplay” was too broad to cover the topic I am looking at today.  For example, by Hollywood standards, all of the following films would be classed as ‘original screenplays’: Fast and Furious 7, Saw IV, Final Destination 5, A Good Day to Die Hard, The Expendables 3, Rio 2 and Evan Almighty. Sadly, my definition cannot take into account the true originality of the creative content. For example, the highest grossing ‘truly original’ film on my list is Avatar, which has often been accused of being an amalgam of existing tropes.  The Boston Globe reviewer Ty Burr elegantly pointed out in his review of the film “In terms of plot, then, this is “Dances With Wolves.’’ Seriously: It’s the same movie, re-imagined as a speculative-anthropological freak-out“.

Trouble at the top

I think many cinema-goers would be surprised to hear that over a third of Hollywood films are original, as shown above.  Cynicism aside, this is because not all movies are created or marketed equally.  The biggest ten movies of each year are rarely ‘truly original’ (15% of the time, 2005-14).

It’s what we’re paying for

So far we have been looking purely at the number of films released.  When we turn to look at the amount of money grossed in cinemas then the difference is even starker.  In 2005, 34.5% of the money spent in US cinemas on the top 100 films went to ‘truly original’ films but by 2014 that had dropped to 19.2%.

This race towards derivative films has been happening at all levels, but nowhere faster than in the top tier of grossing films.  In 2005, almost a quarter of the money spent on the top 10 grossing films went to ‘truly original’ movies.  In both 2011 and 2012, this had dropped to just 7.8% of the box office gross and in both 2013 and 2014 it was 0%.

Between 2005 and 2014, the average budget for the top 100 grossing films based on existing material was $70.8 million, whereas ‘truly original’ films had an average budget of just $46.4 million. 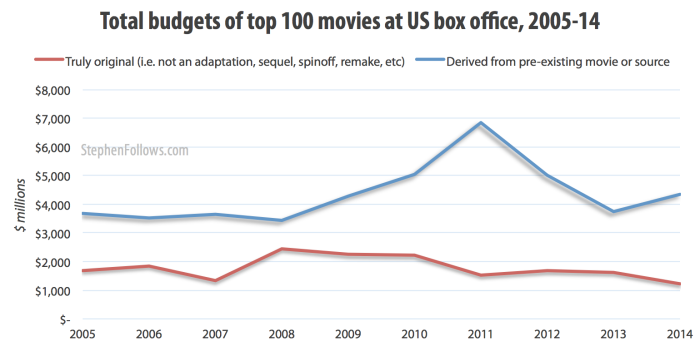 So what types of material are movies adapted from?

If it has a fan base, almost anything could become a movie.  I think most people expect movies to come from best-selling books but few of us ride a rollercoaster, use a website or play a boardgame and think “There could be a movie in this”. Below is a list of sources of common original materials, including the best performing title for each source between 1995 and 2015 (the titles were selected for being the highest grossing film from each source at the US box office when adjusted for inflation, as of 8th June 2015) …

The most common source for adaptation is a fictional novel or short story, accounting for 19.7% of the top 1,000 movies of the past decade. Adapt or try to write something original

Some genres are more likely to be ‘truly original’ than others.  Almost 70% of romantic comedies are not adaptations or a sequel etc to another movie.  (Whether or not they’re creatively derivative is not for today’s article!)  Also, not one of the top 1,000 highest grossing films of the past decade was a romantic comedy based on true life events.  It seems that if we want to hear a story of true love then we need to make it up. Why is this happening?

There are always many reasons why one movie gets made over another, however the trend towards increased adaptations, remakes and sequels is undeniable and so there must be a reason (or reasons) behind it.

My theory is that the environment for Hollywood movies is getting riskier and so studio execs are even more risk averse than ever before.  Making and promoting a Hollywood movie is a massively expensive endeavour and you won’t really know how it might perform at the box office until a few weeks before release.  That’s a few years after you’ve greenlit the film and it has been tying up your money and resources.  In the past few years there have been an increasing number of huge-budget failures, making Hollywood execs even more jumpy.

So how do you reduce the perceived risk of a project?  You base it on something which has already proved popular and which has a ready-made fan base.  The most straightforward version of this is knocking out a sequel as soon as possible after a film performs well in cinemas.  To a lesser extent, adapting a pre-existing story into a movie provides many advantages for the risk-averse Hollywood Exec, including…

Notes on ‘How original are Hollywood movies?’

The data for today’s research came from The Numbers, Box Office Mojo, IMDb and Wikipedia.

Next week I’m going to look at the proliferation of sequels, remakes and reboots in Hollywood.  See it as a sequel to the smash hit article you’ve just finished reading. I am already looking into merchandising rights for the graphs…