How successful are UK documentaries in cinemas?

10 August '15 2 Comments on How successful are UK documentaries in cinemas? Currently on its sixth week of release, Asif Kapadia‘s feature documentary Amy is performing extraordinarily well and looks like it will become the best performing UK documentary of modern times (beating Asif’s previous film Senna). Its current box office gross is around £3.5million and so only time will tell if it will unseat Fahrenheit 9/11 as the UK’s best performing documentary ever, which grossed £6.55million in the UK in 2004.

The success of Amy has led a couple of people to ask me how UK documentaries normally fare in cinemas.  In summary…

One in five UK films is a documentary

Documentary is the most popular genre for UK filmmakers, accounting for over one in five films made in the UK.  That said, we don’t seem to spend all that much money on them.  Despite documentaries making up almost 21% of the films made in 2013, only 1.9% of the total spend went towards their budgets. The vast majority of UK documentaries are independent productions

Just like Amy, 95% of UK documentaries are made without support from a US studio. 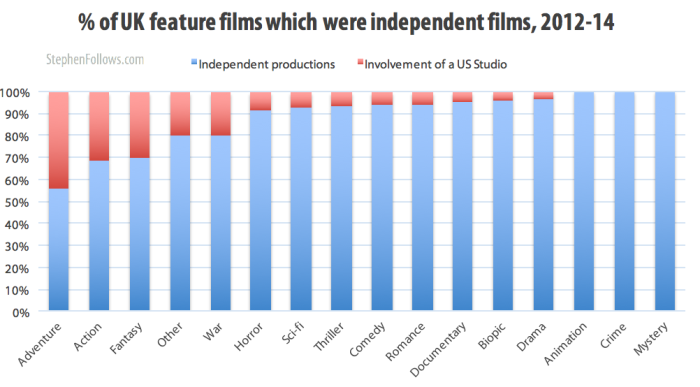 And documentaries are on the rise in UK cinemas

During 2001, there were only four documentary feature films released in UK cinemas.  By 2013, that figure had grown over twentyfold to 89.  There were almost twice as many films in UK cinemas during 2013 than in 2001 (698 compared with 352), which means that despite fiercer competition, documentaries are taking an ever-larger share of the release calendar. BUT… British audiences aren’t watching them

You could be forgiven for thinking that this huge number of documentaries is down to a growing demand from the British public.  Sadly, that’s not the case.  Despite making up almost 13% of 2013 cinema releases, documentaries only grossed £10.7 million, or 1% of the overall UK box office.  And 2010 was worse – with the 58 feature documentaries released each taking an average of just £33,000 and together accounting for just 0.2% of the UK box office. Documentaries are not a big draw on DVD either, accounting for just 0.6% of the 2013 sales on physical video.

It should be noted that many documentaries which flounder in cinemas will later find a grateful audience on TV (such as in the BBC Storyville thread) or on other platforms (such as Netflix who are increasingly becoming a major force in documentaries).

Documentaries don’t stay in cinemas as long as mainstream* films.  In 2013, the average documentary was on release for 7 weeks, compared to 11 weeks for a mainstream release.   By comparison, British films which have were backed by a major Hollywood studio were in cinemas for an average of 17.5 weeks.

*The BFI classify films as ‘mainstream’ if they are commercial and aimed at “the general public” whereas documentaries fall into their ‘specialised’ category, along with foreign language, subtitled and arthouse films.

Not only that but they are released in a handful of cinemas.  To look at the scale of documentary releases we need to look at the number of cinemas they are normally screened at.  A useful metric for determining a film’s release scale is the number of sites at its ‘widest point of release’, usually during its opening weekend. In 2013, the average ‘widest point of release’ for documentaries was 20 sites.  For sci-fi films, it was 422 sites. Although very low, the widest point of release for documentaries has actually risen in the past decade; in 2004 it was just 11 sites.

“Amy” opened big – and then grew

The distributors of Amy, Altitude, knew that the film would outperform the average documentary release, which is why they opened the film on 133 sites.  In the second and third weeks of release, the film was released on more screens, meaning that its widest point of release was 254, during the week of 17th July.  To put it another way, Amy has been released in more UK cinemas that the average action movie. So far, Amy has grossed more than 166% of all the documentaries released during 2010.

The data today came from the BFI, Rentrak, IMDb, The British Video Association and the Official Charts Company.  If you want to watch the Amy box office drama unfold then I suggest following Charles Gant’s excellent box office analysis at The Guardian or check out the raw numbers yourself via the BFI’s weekly reporting of Rentraks official box office figures.

No mention of the topic of UK documentaries would be complete without a plug for Bertha’s DocHouse. Opening earlier this year within the Curzon Bloomsbury (previously called the Renoir), the DocHouse is the UK’s first cinema dedicated solely to documentary films and events.  If you haven’t been yet, I strongly recommend it.