How long is the average movie trailer?

17 July '17 4 Comments on How long is the average movie trailer? I’ll admit it – I’m not a fan of movie trailers.  It feels like their two purposes are to spoil the best bits of a movie and to frustrate the audience by pointing out how long we have to wait before we can see the whole movie.  Imagine if the free samples in a supermarket were followed by a two-month gap before the product was available for purchase.

Nonetheless, they’re here to stay.  And despite their significance in the film industry, they’re a topic I am yet to cover on this blog.

To cover up this glaring omission, I have conducted two research projects – the first is below, looking at the length of trailers, and next week I will address how far in advance trailers are released.

To study the length of trailers, I built a dataset of movie trailers for just over 20,000 movies released between 2000 and 2016, inclusive.  I then found their trailers and looked at their running times (see the notes at the end of the article for details on sources and methods).

How long are movie trailers?

The length of movie trailers varies significantly. Some are extremely short, such as the 11-second long teaser trailer for Dawn of The Planet of the Apes, while others were much longer, such as the eight-and-a-half-minute-long trailer for the remake of The Girl With the Dragon Tattoo (that’s 504 seconds, to be precise).

Across the trailers I gathered data on, the average length was 114.2 seconds (i.e. one minute and 54 seconds).  To give you a sense of how long that is, click here to watch an 114-second long trailer for the 2008 Tom Cruise film Valkyrie. Just under a third of movie trailers are between two and two and half minutes long. 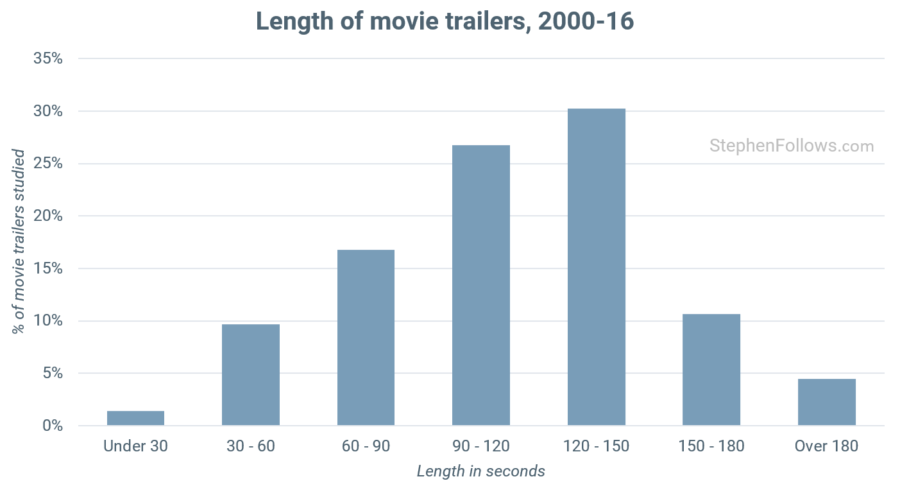 Which genres have the longest movie trailers?

The longest trailers belong to documentaries and fiction films centred on sporting and historical events, while the shortest trailers are typically for horror and sci-fi films. The data doesn’t tell us why this is, but my guess would be that it’s related to the amount of information that needs to be conveyed.  Most horror films have a clear concept and rely on a lack of information for their power.  Conversely, documentaries and films on historical events require the audience to know more about the film’s setting in order understand what’s on offer.  Feel free to propose alternate explanations in the comments below.

I built my dataset of movie trailer data from a number of public sources, principally YouTube, Trailer Addict, Movie List, IMDb and Wikipedia.  Due to the nature of movie trailers, there a number of compromises I had to make along the way, including:

I didn’t always hate trailers. As a kid, I was an avid reader of early press coverage of movies and loved nothing more than seeing trailers for forthcoming movies.  As I get older I eschew all such information about new movies, partly because the child in me wants to experience the events / spectacles / jokes for the first time during the movie, but also because the adult in me is cynical due to years of lying trailers!

For example, the trailer for the 1997 film Conspiracy Theory implies that the film is about a crazy man (convincingly portrayed by Mel Gibson) who accidentally uncovers a true conspiracy.  The plot of the actual movie differs from this significantly and the trailer actually proposes a better movie than is delivered.

Or trailers can include more subtle lies. A prime example of this was actually in the news last week when the new Spider-Man trailer was revealed to include shots not in the actual film.

Some film editors have turned lying trailers into an artform, by re-cutting a trailer to misrepresent a film’s true genre. My favorite example is below, which pitches Kubrick’s genre-defining horror The Shining as a family-friendly romantic comedy.