The relative popularity of genres around the world In the second of four articles we wrote for the American Film Market, Bruce Nash and I looked at the relative popularity of genres around the world.

We studied the territorial breakdown of theatrical box office grosses for 3,368 films covered by The Numbers’ international box office tracking. This covers most films released since the beginning of 2015, with some data going back to 2012. We developed a formula for assessing the relative strength or weakness of each genre within a territory when compared to that genre’s global performance (more details at the end of the article).

In the charts below, zero indicates the global average performance, so a positive score indicates that the genre in question performs disproportionality well in that territory. We start our journey through the genres with Action films. These cinematic spectaculars perform disproportionality best in Asia and weakest in Europe.

Explosive action from films like Furious 7 and Jurassic World bump up the numbers, but China, Japan and South Korea also have their fair share of homegrown hits in this genre.

Mexico is a good opportunity for independent producers, with enthusiasm there for foreign-made films, particularly from the United States. The birthplace of Commedia dell’arte and Roberto Benigni, Italy is the home of comedy, and by a large margin. Comedy films perform about twice as well in Italy as they do in other countries, as a share of the total box office.

This is a difficult genre to sell internationally, so we hesitate to recommend trying to sell every comedy in Italy… but suffice it to say, slapstick and family fun will work better here than it does in South Korea or Japan, by our analysis. Documentaries do not seem to travel well. On average, 86.9% of the money documentaries gross comes from a single territory (which is almost always their home country).

When they do travel, they are disproportionately welcome in the US & Canada and Australia.

China, Japan and Russia perform particularly poorly in this category, which could be because of cultural and political sensitivities. Perhaps surprisingly, documentaries don’t appear to do especially well in Europe either. The performance of drama is a bit of a mixed bag around the world.

South Korea comes out top, but lots of countries seem like potential markets for a good drama: the core European territories (UK, Germany, France and Italy), Australia, the United States and Russia are all receptive to the right kind of film. Mexico, Japan and China stand out as less promising targets. 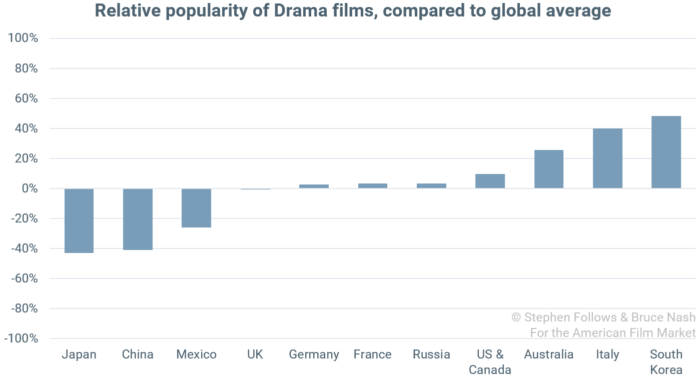 Cinema audiences in Mexico and South Korea are the biggest horror fans, with the genre performing less well in Japan and China.

The Chinese disinterest in horror is due in part to the restrictive censorship rules in China, which strictly limit what types of movies are permitted in Chinese cinemas.  Many horror films will fall foul of restrictions on the promotion of bad habits (which include smoking, drinking, gambling, obscenity, drug abuse, sex, violence and criminal activity) and movies containing ideas not based on scientific fact (including ghosts, religion, time travel, the supernatural and superstition). Mexico turns out to be a very healthy market for romantic comedies, and we were surprised to see Russia at the top of this list too.

The Japanese and French seem to be less enthusiastic about matters of the heart (or they’re less inclined to find such things funny?) Below are a few notes and clarifications on this research: I’m grateful to Jonathan Wolf from the AFM for suggesting and supporting this research.