Should I go to film school? If so, which one?

This is the fourth in my carefully-planned trilogy of articles about film schools.  I have collected some statistics and links to help wannabe film students work out “Should I go to film school?”. I’m also proud to launch an entirely free database of the film schools and courses I found while carrying out this research.

is a government-backed organisation which provides a standardised scoring system for Higher Education courses in the UK.  They survey students to measure factors such as student satisfaction and employment after graduation. Unistats only publishes information for courses when they feel they have enough student responses, and they only cover courses on the UCAS admissions system.  Therefore, out of the 537 courses across 145 educational institutions I found, Unistats provides data on 219 courses and 96 institutions (i.e. 41% of courses and 66% of institutions). Below are the averages for educational institutions offering full time film courses starting in 2015 which feature some element of practical filmmaking.

The chart below shows the percentage of surveyed students who agreed with the statement”Overall, I am satisfied with the quality of the course“.

The chart below shows the percentage of surveyed students who felt that “the staff are good at explaining things“.

The chart below shows the percentage of surveyed students who were in paid employment six months after they graduated.

What the inspectors think

If you are after more qualitative data on schools then I would suggest you look for at QAA reports.  They send inspectors to the schools to write independent reports on the quality of teaching and make recommendations for improvements.  They then return to assess where improvements are being made… You can search their website to locate reports for each institution but to make it easier for you, here are a few of the more recent investigations for film schools…

Using 2012/13 data from the Higher Education Statistics Agency, we are able to look at what arts students do after they graduate. (Sadly there is no breakdown of just film courses). The vast majority of arts students go into work in the UK after graduating. And that work is mostly in “associate professional and technical operations”.  This is broad category which covers almost all professions in media but also therapists, fire fighters and air traffic controllers. 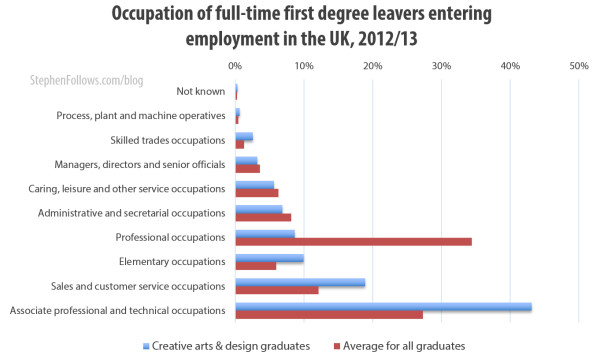 So, should I go to film school?

During my investigation and reporting I have taken care to avoid passing judgment on the courses and schools.  I don’t feel it’s my place to judge from afar and, most crucially, there is no simple answer to the question “Should I go to film school?”  It works for some and not for others. If you’re reading this and pondering that very question then I suggestion you perform your own mini research project….

I have been asked by a large number of people for a copy of the database I created during this research, so I have prepared two things… Firstly, I have set up FindAFilmSchool.com.  It is a searchable database of films schools and courses.  It’s free to use and my hope is that people will submit suggestions and corrections to the data.

Secondly, see below for a list of UK institutions offering film courses which are at least one year long, involve some element of practical filmmaking and start in 2015. Disclaimer: These are the schools and courses that I could find when looking in December 2014 and January 2015.  Some schools will change their courses and it is possible I have missed information.  I will not be updating this list, just for logistical reasons.  Therefore, if you would like to view the most up to date information, or submit updates, then please head over to FindAFilmSchool.com.

This represents my final article on film schools for a while.  It’s a topic which I am hugely interested in as it mirrors the best and worst of the film industry. Some institutions are cynically exploiting eager young people for profit while others are investing in the next generation of artists and industry leaders. Thank you to everyone who helped and gave advice, specially Alexis Kreager and Zac Klein.