Is the current film boom good for UK independent filmmakers?

I get asked a lot what the numbers reveal about the state of the UK film industry. The overall numbers suggest that we’re doing pretty well.  Box office admissions are up 250% from 1980, we have the second biggest box office in Europe (although frustratingly behind the French), UK employment in film production is twice what it was 15 years ago, and our films are taking an increasing amount at the global box office.  Most crucially, the last few years have seen the largest number of films produced in the UK since the invention of film.

However, this answer rarely sits well with small UK independent filmmakers. Many insist that times are hard and that the benefit of the ‘boom’ is only being felt by the Hollywood studios who will just leave once the juicy tax money dries up.  So I decided to take a more detailed look at the numbers behind the films made in the UK.

How many films are produced in the UK? Who is making these films – Studios and UK independent filmmakers

The UK currently has a stable and attractive tax credit system which has lured large Hollywood productions to our shores, such as Edge of Tomorrow, Fast & Furious 6 and the Batman trilogy to name just a few.  However, this same tax credit system is open to feature films of all levels and is in fact more attractive to films budgeted under £20 million than those over £20 million. So is it studio productions or independent films which account for the recent boom in the number of films made in the UK?  It’s independent films. However, that’s only half the story… while the number of UK independent films has increased, the total amount of money spent on those films has not. This means independent filmmakers are making more films but on much lower budgets.

Where is the money coming from?

By number, the vast majority of films produced in the UK are financed by UK-based sources (i.e. a domestic funding source). The rest are either funded by inward investment (i.e. majority of the money came from a non-UK source) or via a co-production. In 2012, 73% of the films produced in the UK were financed domestically, but these films only accounted for 24% of the overall spent that year on UK films. To illustrate this more clearly, the chart below compares the percentage of UK films which were funded by a UK source by both number and by amount of money spent each year. What budget range are these new films?

In order to be eligible for the UK Tax Credit, films need to be officially certificated as British by the DCMS.  This is achieved either via passing the Cultural Test or by being approved as an official co-production.  The data released by the DCMS gives us another way to look at how budgets are changing for UK films. The chart below shows a huge increase in films made on under £500,000, accounting for much of the ‘boom’ in films shot in the UK. The chart for co-productions tells a different story (that of a sharp decline in co-productions) which I will address in another article. 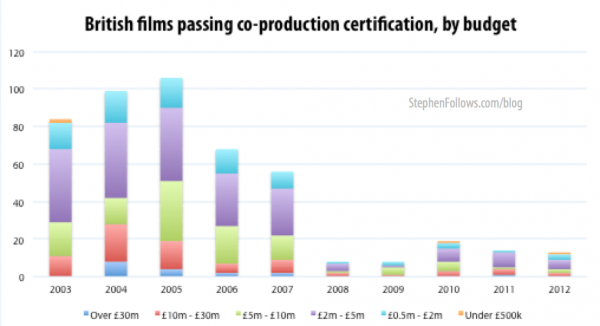 Note: These figures differ slightly from the previous charts as they are calculated using the year that the certificate was issued, whereas the previous figures are based on the year in which principal photography commenced.

The figures today came from the BFI, DCMS, IHS and the European Audiovisual Observatory. Last weekend I had the pleasure of a private tour around the Hadron Collider in CERN. While I was chatting with one of the scientists they asked me what I did and I mentioned that I produce films.  In response he asked me to pass on a message to ‘the film industry’  So, film industry are you ready? Good, then I shall begin…

“We don’t all wear white coats, laser beams move at the speed of light (and are normally invisible), you can’t have a vial of antimatter and if you cut out someone’s eye it won’t work in our iris-reading security doors”.

I suspect that the final two complaints were aimed specifically at Angels & Demons. Here, in the pursuit of better harmony between our two worlds, I present some bedtime reading…