10 June '19 6 Comments on What percentage of actors are willing to perform nude? On-screen nudity has always been a contentious topic for new actors.

Many movies and television shows have small roles for actors who are willing to bare their bodies, meaning that if an up-and-coming actor disrobes on-screen, they can potentially give their CV a boost.

On the other hand, doing so means that there will forever be video clips of them naked online: something that would make the vast majority of people uncomfortable.

We cannot get inside the head of every actor facing this choice, but we are able to measure what actors mark on their professional profile in relation to their willingness to perform nude. The data for today’s piece comes from my database of every working actor in the UK who has a public profile (see the notes section at the end of the article for my sources and methodology).  This includes 66,011 actors, ranging from A-list names through to new and emerging talent.

I will tackle the ethics and real-world concerns about on-screen nudity in the second half of this article, but first, let’s look at the statistics.

Note: This relates to roles on professional productions and is nothing to do with pornographic productions or off-screen actions.

Across all UK performers, 60% of female actors say they are willing to perform nude, and 79% of male actors.

How does this change as actors get older?

An actor’s willingness to bare all is likely to be connected to their age, although it’s hard to know in which direction.  They may find that as they age their body confidence grows and they feel more able to handle the on-set experience, or they may feel that the effects of time make them no longer want to be seen naked, meaning that the only naked version of themselves committed to film stays forever young.

In order to see how preferences change, I have plotted the willingness to perform nude against the age of actors.  Last week, I looked in detail at the topic of actors and ageing and so today I will simply say that the age I am using relates to the middle of their self-reported playing age. So if an actor says they can play “20 to 30 years old” then they will show up here as 25 years old.  You can read more about this in last week’s research.

Willingness to perform nude is relatively low for those with a playing age of below twenty, perhaps in part because these actors could still be under 18 years old (in the UK it is illegal to make, share or own naked images of people under 18).  The percentage of actors in their 20s and 30s who are willing to perform nude is fairly static, staying around 80% for male actors and 65% for female actors.  Once actors reach their 40s, they become less keen, with female interest falling faster than their male counterparts. 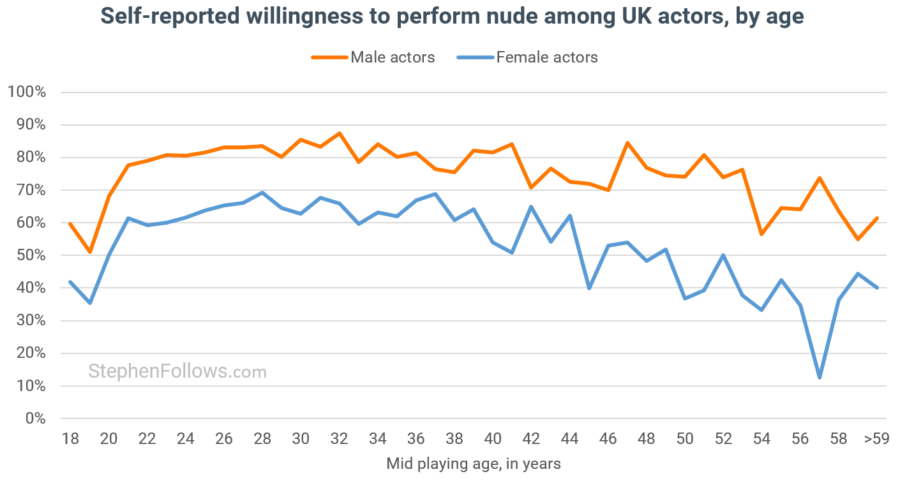 The data doesn’t reveal if these effects are caused by typical changes in viewpoint which come to us with age or are a consequence of measuring different generations (for example, the actors currently in their 40s were born in the 1970s and their experiences may have affected their willingness to appear nude when compared to actors born in other decades).  We will have to wait a few decades and conduct this research again to get our answer!

The full actor’s dataset includes a large amount of professional data about each performer.  Therefore, I was able to see what correlates with an actor’s willingness to perform nude. I’m going to look at three of the strongest correlations, namely:

The dance style most connected to people who are open to on-screen nudity is the tango.  At the opposite end of the spectrum, cabaret (often associated with burlesque) is among the least connected to professional nudity, along with tap and hip-hop.

On professional listings sites, actors are asked to report their “appearance”, such as “White”, “Mediterranean”, “Hispanic”, etc. By looking at the ten most common choices, we can see a correlation with their willingness to perform nude.

Those who describe themselves as “Scandinavian” or “Eastern European” are the most open to professional nudity, with those referring to themselves as “Black-African”, “Black-Caribbean” or “Asian” the least.  This holds true for both male and female actors.

Finally, the connection between body shape and attitude to nudity is that as performers get larger, they are less keen to bare all.  81% of ‘slim’ male actors are willing, compared to 56% of ‘very large’ male actors.  The same is true for female actors, with 63% for ‘slim’ and 42% for ‘very large’. The ethics of actors performing nude

I would feel remiss if I didn’t end on a quick discussion of the ethics of on-screen nudity.

In theory, this question is easy – “Does the actor know what’s being asked of them and are they completely happy with it?”  If so, end of story.

In the real world, things are more complicated. Among the issues which could arise are:

Perhaps in an attempt to remedy this, a recent trend has been the hiring of an Intimacy Coordinator, who can act as support for the actor and a go-between from them to the director, as well as intimacy workshops which teach actors how to navigate this tricky area.

Background actors on the television series Westworld were asked to sign contracts which included the following note on on-screen nudity: This document serves to inform you that this project will require you to be fully nude and/or witness others fully nude and participate in graphic sexual situations. By accepting this Project assignment, you may be required to do any of the following: appear fully nude; wear a pubic hair patch; perform genital-to-genital touching; have your genitals painted; simulate oral sex with hand-to-genital touching; contort to form a table-like shape while being fully nude; pose on all fours while others who are fully nude ride on your back; ride on someone’s back while you are both fully nude; and other assorted acts the Project may require. The Project will also include language and sexual situations that some may consider personally objectionable or uncomfortable.

While this may sound extreme at first glance, it can be viewed as a positive move on behalf of the Westworld team.  It suggests that they are being clear and up-front with the performers as to what to expect, and what they are agreeing to if they sign on.  Additionally, these performers were paid around $600 a day – over four times what they may receive for appearing in a more typical, clothed crowd scene.

Olivia Colman and Robert Webb were far less fortunate when they starred in 2006 British film Confetti.  The film follows three couples as they prepare for their wedding. Colman and Webb played a nudist couple planning naked nuptials.  We cannot know what was agreed between the filmmakers and actors, but both actors have since said that they were expecting their private parts to be pixelated.  Worst of all, they discovered that their naked bodies were on full display during an early screening of the finished movie.  Olivia Colman described it as “the worst experience of my life”.

Conversely, in The Favourite, also starring Olivia Colman, Emma Stone voluntarily bared her chest in a bedroom scene, to increase the power of the moment in which a rival discovers Stone’s character has usurped her as royal concubine.  As Stone describes it: I had the sheet up around me, and as we were shooting it and we did a few takes, I said, ‘Can I please just be [naked]?’ I think it’s going to give Sarah something to look at when she sees that I’m not just under the sheet covered up. Olivia was like, ‘No, don’t do it!’ [director] Yorgos [Lanthimos] was like, ‘Are you sure that’s what you want to do?’ And I was like, ‘Absolutely.’

Hopefully, one of the effects of the #MeToo and #TimesUp movements will be an increased awareness within the industry about how actors are treated, how power can be exerted and a generally more conscious environment.