Will it rain at the Cannes Film Festival?

I don’t know if it’s limited to just the British tent, but the conversations in Cannes seem very weather-orientated at the moment.  I have been asked a number of times if I know whether it will rain.  So, once and for all, no I don’t know.  But I can tell you what the weather has been like at Cannes Film Festival in previous years.

Over the past ten years, it has rained on 29% of days during the festival. 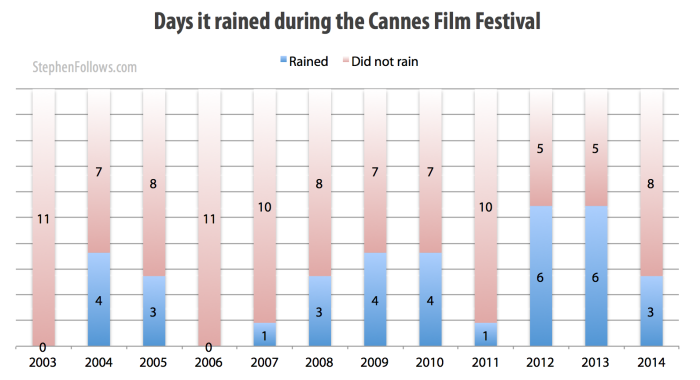 The tan in Cannes stays mainly on the fans 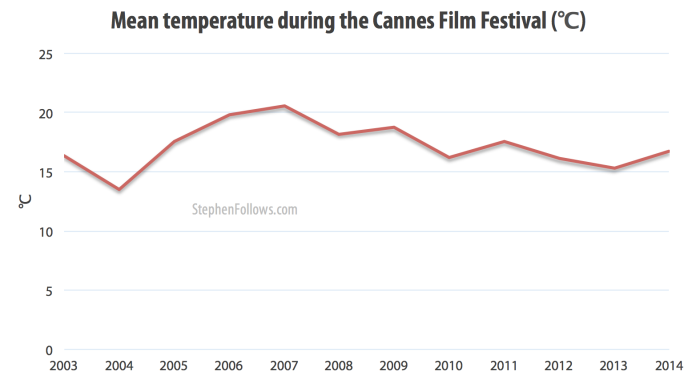 The highest temperature ever recorded in Cannes during the month of May since 1981 was a scorching 38℃ and the lowest was 2.3℃ – quite a range!

Throughout the rest of the year the weather in Cannes fluctuates between 8℃ (in January) to 22℃ (in July).  The driest month is July, with an average of just 16 millimeters of rain, compared to the wettest month of October, which has an average of 120 millimeters.

Notes on the rain at the Cannes Film Festival

The data came from the Weather Underground, Holiday Weather, Wikipedia and the Cannes official site.

I normally blog every Monday but this blog-ette was a quick bit of fun to answer this crucial question.  Normal service will be resumed on Monday.