30 March '15 6 Comments on Are films with public funding better than those without? 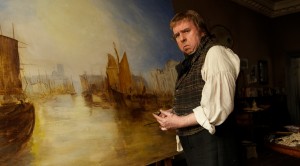 I recently had a conversation with someone who works at a major film public funding body (who shall remain nameless) and they said “I am starting to doubt if the films we fund are actually any better than the ones we don’t”.

It sounded like a good topic to investigate so I agreed to do some research. This goes to the heart of why public funding for films exists – is it to train filmmakers, to foster creativity/art, to invest in an industry or for something else entirely?  Without knowing why we support films with public funding we can’t agree on an objective set of factors to measure success.

However, in order to investigate this topic today I am going to take a leap and define “better” as “better received by audiences and critics”. In the past, I have studied how film critics and audiences rate films, who is distributing the best films in the UK, which types of adaptations make the best films and if British films are better than Hollywood films.  In those examples I have used the Metascore and IMDb user ratings as a shorthand for determining what film critics and film audiences think of a film, so I’m going to do that again here. In summary…

Who are the public bodies funding films?

The single largest UK public funder is the taxman; in the tax year 2012/13 HMRC paid out £206 million to British feature films.  The scheme provides around 20% of the production budget back to the filmmakers in cash/tax refunds upon completion. It’s only open to films officially classed as “British”, although in practice the rules are so broad that almost all feature films shot in the UK are eligible. For today’s research I’m not going to include the Tax Credit as although it is technically public funding, it’s open to all films without a measure of quality.

The public funding I’m looking at today is discretionary awards made by public bodies toward development and production costs. Most (but not all) of this money is raised via the National Lottery and managed by the BFI.  In 2013, public money spent on films with public funding was split as follows…

How many films get awarded public funding?

I used my database of films shot in the UK (based on BFI data) to build up a dataset of the 1,689 feature films shot in the UK in the five years between 2009 and 2013 inclusive. Although I was only studying a five year period, I found that the funding landscape changed significantly during that time.

Most notably, the UK Film Council was closed in 2010, with its Lottery funding duties being passed to the BFI.  In addition, the regional funding bodies changed from a collection of eleven regional screen agencies (nine in england plus one each for Wales and Scotland) to our current crop of five national screen agencies.

To further confuse matters, some of the old public regional screen agencies are still running but as private enterprises. And finally we have the rather shameful case of Screen East, which was shut down in 2010 after their finance manager was arrested for fraud! I am not here to speculate what all this change has meant for filmmakers, nor if it was successful, but it certainly makes the whole picture more complicated to track.  For ease, I grouped together a few organisations who I felt covered the same remit. For full details of which organisations are included in each group please refer to the Notes section at the bottom of this article.

Overall, 340 films received some form of UK-based public funding – 20.1% of all films shot in the UK. In total, I found 141 films directly supported by the BFI or the UK Film Council (UKFC) which represents 8.3% of the films made in that period, or one in every twelve films.  The BBC were involved with 112 films, or 6.6% of films made. 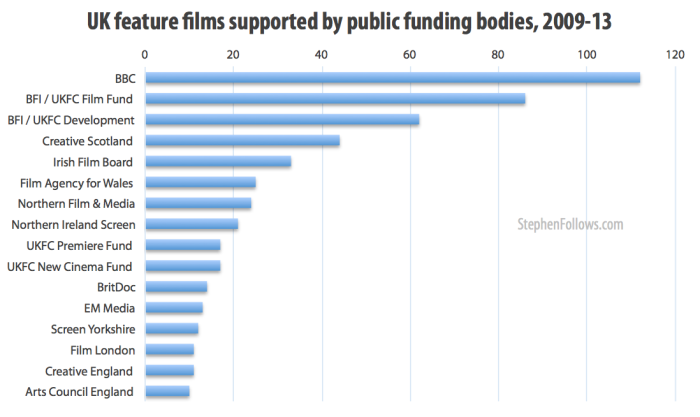 Other than the Irish Film Board, I did not track non-UK based public funding.  Across public funding bodies in all countries, 417 of films shot in the UK received some sort of public funding support, UK or international.

If a film was supported by one UK-based public body then there was a 57% chance that is was funded by a second public body. In summary, for all films shot in the UK between 2009-13…

So, are the films with public funding better?

In a word, yes. I looked at the average Metascore and IMDb user ratings for all film shot in the UK and then compared that to the averages for films funded by UK-based public funding bodies. The UK average for British films during this period was 6.1 out of 10, whereas films backed by BritDoc achieved an average of 6.9 out of 10.  Across all public-supported films, the average was 6.5 out of 10. The Metascore is an average of film critics’ scores, and the average for films with public funding (63 out of 100) was higher than the overall average across all UK films (59 out of 100). My chart below includes fewer organisations as I only included bodies who had backed a minimum of five films with a Metascore. What does this mean?

This is a tough question.  What this is measuring is correlation, not causation.  We can say that there is a connection between the quality of a film and the involvement of a public funding body but that doesn’t tell us why. It strikes me that the two most likely options are either that…

I don’t have enough information to be able to say with confidence which is the stronger of the two causes.

As stated above, there are a myriad of regional and national funding bodies involved in the films with public funding. I measured today.  For ease, I grouped together bodies who I felt covered the same remit or region.  This is a bit tricky to do from afar so if anyone reading this was involved with any of the now-defunct bodies and disagrees with how I grouped them then please drop me a line.  I’m happy to explain more on a case-by-case basis and also to update this article to reverse any particularly egregious groupings.

The breakdown of how public money was spent in film came directly from the BFI.  My database of films is based on raw material supplied by the BFI.  I have then built upon that and cross-referenced it from public data from IMDb and Metascore. If you’re interested in finding out more then I would suggest reading the Arts Index of England from the National Campaign for the Arts.

I’ve not received any public funding for films I’ve made, although I am a big supporter of some of the work the BFI does.  It’s a hot topic in the UK (especially as we’re going through a time of budget cuts across the board) and everyone seems to have a view.  One pattern I’ve anecdotally spotted is that the likelihood of someone being supportive of public funding in film is directly linked to the level of funding they have personally received.