Are “the best British films” documentaries? Ed emailed me to ask “It seems to me that most of the best British films… are documentaries.  Is this true?”

Thanks for the question, Ed.  In order to look at this, I built up a list of feature films shot in the UK between 2003 and 2014 (2,688 films) and looked at the genres of the highest rated films according to both film critics and audiences.  In summary…

Defining “The Best of British”

I built my list of films shot in the UK from BFI tracking data, cross-referencing their genres from IMDB (which I’ve written about previously).  MetaCritic’s MetaScore combines all of the major reviews for a film and provides an average score out of 100, giving me a good measure of each film’s critical reception.  To gauge each film’s appeal to audiences I looked at IMDb user ratings, which is a score out of 10.

Half of all films scored between 50 and 70 from critics, with an average score of 58 and the average IMDb user rating was 6.2. 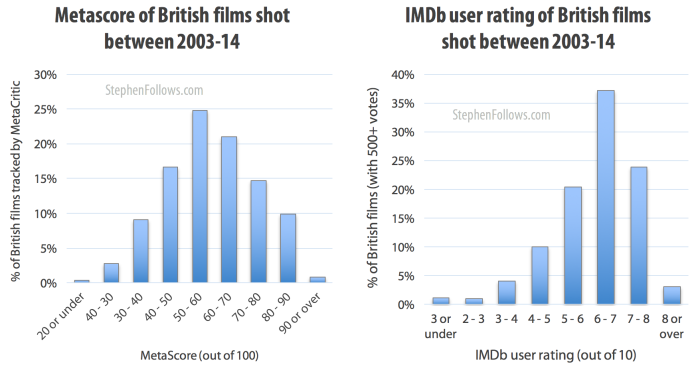 What genre are the critics’ favourites?

A disproportionate number of critics’ ‘top films’ were dramas, with 60% of the top films featuring drama as one of their three genres compared with 49% of all films made. Other genres which feature disproportionately in the top strata of British films include History, Biography and Documentary.

The genres which were underrepresented in the top films list were Horror, Thriller and Comedy.  Horror accounts for 13% of the films made in the UK but only 3% of the films with a MetaScore of at least 80.  In fact, that 3% is just two films – Sweeney Todd (MetaScore = 83) and Berberian Sound Studio (MetaScore = 80). And which genres do audiences rate highest?

Interestingly, Drama was the most underrepresented major genre in the audience’s top picks. This echoes research I performed last year which looked at the differences between how film audiences and critics rate films. So are “most of the best British films” documentaries? However, it is true that documentaries are over-represented – making up a larger than average percentage of ‘top films’, compared with all films made in the UK (between 2003-14 and which fitted into my research criteria of having a MetaScore and at least 500 IMDb votes).

The list of films came from the BFI, the MetaScore came from Metacritic and the user rating and genres came from IMDb.  For the audience list I chose to only include films with at least 500 IMDb user votes (47% of British films made in this period) in order to prevent the results from being skewed by films with only a handful of users – presumably the cast, crew and their relatives. Of the 2,688 British films I looked at, 730 had a Metascore (27% of British films).  This is because not all films get reviewed and the MetaCritic system only tracks films with reviews from established critics.

The idea for today’s research came from a reader who emailed me when last week’s article on documentaries sparked their curiosity. I’m always keen to answer questions so if you’re wondering something about film drop me a line.