Every few weeks, there is a news story about a new challenge to the traditional distribution model for movies.  The latest of these was the announcement last week that the new Shaft reboot would be using the hybrid release strategy. In the US, it will follow the usual movie release pattern (i.e. theatrical release followed by delayed release onto other platforms), but in the rest of the world, it will premiere on Netflix just two weeks after the US theatrical release.

By using this innovative approach, the filmmakers were able to get Netflix to pay for “more than half” of the movie’s reported $30 million budget.

This news led me to wonder how movie release patterns are changing.  For today’s research, I built up several databases with movie release dates going back to 1994 and took a look.

In this article, I am going to be discussing changes in movie ‘release windows’.  The first window is usually theatrical (i.e. cinemas).  After a period of time, movies are made available to airlines and hotels, which is known as the second window of release. In the past, this would be followed by Home Video (rental and retail), then premium television and lastly free-to-air television.  These windows used to be fairly rigid and the vast majority of movies conformed to this linear journey.  However, now there are often examples of movies breaking the traditional model, in that they opt to release on different platforms simultaneously or in a different order (i.e. the new Shaft film will be on VOD internationally before theatrical or home video release).

Below is my graphical representation of what the release windows have looked like in recent years: 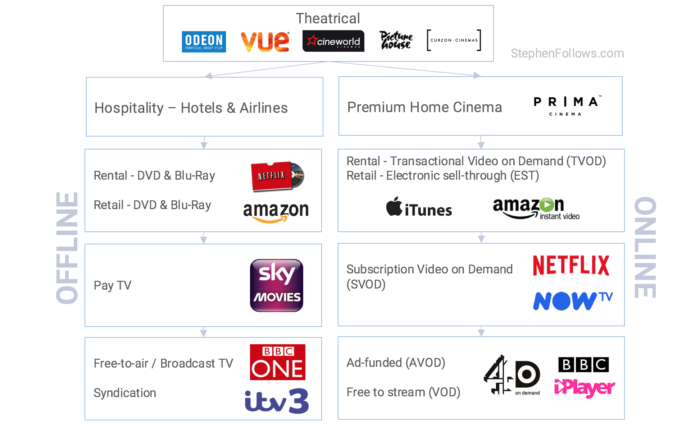 The traditional system hasn’t completely broken down, but many aspects are in flux.  So let’s take a look at how things are changing…

Let’s start by looking at the US market, as that’s the one we have the best data for. In 2000, Hollywood studio movies were released on home video an average of 171 days after their initial theatrical release.  So far in 2017, this average has been just 105 days, representing a 39% fall since 2000. The cinema chains are not happy about this as they see it as an existential threat to their business. They worry that if they lose their window of exclusivity then their fate will be the same as the video rental store, which became obsolete once consumers could buy DVDs on the same day they were released for rental.   If you want to read more about this argument then take a look at the press releases and data from NATO (no, not that NATO – this one is the National Association of Theatre Owners).

Video on Demand (VOD) is still evolving as a market but has been growing in importance over the past decade.  Last year, UK digital movie revenues beat physical revenues for the first time (£1.3 billion versus £0.9 billion), although their total value is still way below the DVD peak of 2004 when physical rentals and sales totalled £2 billion.

This dominance can also be seen in the changing of movie release patterns.  Historically, the ‘third window’ (i.e. home entertainment) was a critical income stream for movies.  Therefore, it is interesting that, on average, movies now come out digitally before they are available to buy or rent physically. Across all movies, VOD is the new third window. Trend 3: The delay in international releases continues to shrink

As well as movies moving onto other platforms quicker, they are also moving around the world at greater speed. The average delay between the release dates of movies in the US and the UK  has shrunk to just ten days in 2016. This is in sharp contrast to 135 days in 2000, meaning that it’s dropped by 96% over the past sixteen years. Some of this trend is down to synchronised release dates but in some cases, it’s due to early releases in the UK.

In 2015, the average was 0.4 days. Of the top ten grossing films that year, only one was released on the same day in both the US and UK, namely Furious 7. Seven movies were released in the UK first (Minions by 29 days, Spectre by 11 days, Avengers: Age of Ultron by 8 days, The Martian by 2 days, Star Wars: Episode VII – The Force Awakens by 1 day, The Hunger Games: Mockingjay – Part 2 by 1 day and Jurassic World by 1 day). Only two of the top ten came out in America first, namely Inside Out by 35 days and Cinderella by 14 days. This trend is not limited to the UK: all major markets have been getting movies closer and closer to their US release date.