28 September '15 4 Comments on How many British films secure theatrical distribution? Almost exactly two years ago I wrote an article entitled “How many UK films get a cinema release?” which was a response to a reader’s question.  In the piece, I referenced data published by the BFI which tracked the fate of UK films made between 2007 and 2010.  This weekend I was asked by The Sunday Times if there were any more up-to-date stats on the topic.  The BFI haven’t published any new stats on topic this year and their previous Yearbook (published in July 2014) only goes up to films shot in 2011.

So I thought it was a good time to revisit the topic and perform my own research.  I looked at all films shot in the UK between 2009 and 2011, and checked if they had been released in cinemas anywhere in the world.  In summary…

Theatrical Distribution in a nutshell

Theatrical distribution means that a film is being screened in cinemas to the paying public and doesn’t include private screenings (such as the premiere or cast and crew screening) or film festivals.  For all of the 20th century, theatrical distribution signaled that a film was a “proper” film, meaning that films which fell short of the goal were dismissed and devalued as “straight to video” or “made for TV”.  It was the standard by which major film critics would decide if they would review the film, sales agents used it as a factor in determining the price paid by distributors and TV broadcasters used it as the benchmark for whether the film could be included in an overall deal where they agreed to pick up all “proper” films from a distributor for a fixed fee. In short, if your film gained theatrical distribution it would go further and be worth more. However, in the modern digital diversified distribution age the picture is far less certain. It’s much easier to make a film and filmmakers no longer need an expensive 35mm print for each cinema they wish to screen at. This has led to a doubling in the number of films theatrically distributed in the UK in the past 15 years; in 1998 there were 327 films on general release but by 2013 the figure was 698.  Even the head of the BFI was quoted as calling the number of films theatrically distributed in the UK “ridiculous“. This has led to major critics rebelling and earlier this year the New York Times broke its age-old rule and will no longer review every film with New York theatrical distribution.  Their co-chief film critic, A O Scott commented..

We research the titles and try to cull obvious four-walls, vanity releases and movies that would have been straight-to-video releases in the past.

N.B. “Four-walling” is where the filmmakers hire the cinema screen for a fixed price and sell tickets to the public.

Despite these changes, theatrical distribution remains a major goal for most filmmakers, so I’m often asked how many actually make it all the way to the big screen.

What percentage of UK films end up on the big screen?

Across all British films shot between 2009 and 2013, 43% ended up with theatrical distribution in at least one territory.  A ‘territory’ is the film industry’s term for the area in which a single distributor will hold exclusive rights to distribute a film.  This is normally just one country (i.e. the UK) but sometimes smaller countries are combined into one territory (i.e. Benelux which comprises of Belgium, the Netherlands, and Luxembourg). The film industry is always looking for clues as to how a film will perform with audiences.  Therefore, securing theatrical distribution in a major territory will significantly help a film’s chances of distribution in other territories. 77% of films budgeted over £1 million which had theatrical release in one territory went on to secure distribution in other countries.  However, for films at the opposite end of the budget spectrum, i.e. those under £150k, only 21% managed to branch out into other territories.  I read this as showing us that many of the theatrical releases of micro-budget films are either vanity releases in their home country, or do not return enough money to be able to strengthen their case for further theatrical distribution. 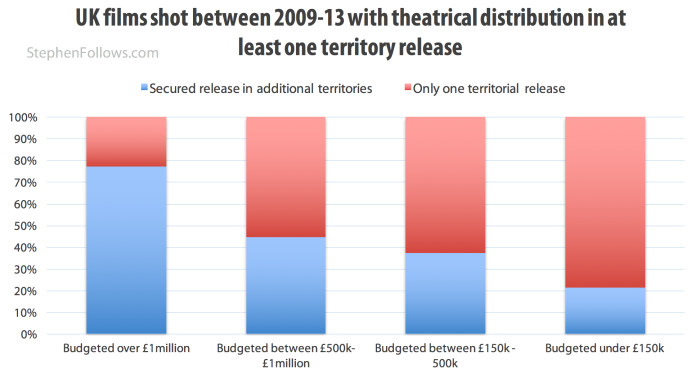 The data today came via Rentrak and is based on a list of British films supplied by the BFI, which I’ve updated.  It should be noted that Rentrak do not track every single cinema as so it is possible that if a film secured a theatrical distribution in only a handful of cinemas, and those cinemas happened to all be outside of Rentrak’s tracking, then they would not appear here.  I do not think that this represents many, if any, films.  In addition, films can take some time to reach the big screen, especially smaller films which have not agreed distribution plans prior to filmmaking.  This means that if I were to revisit the same films in a year then I may find a few more which have secured theatrical distribution.  Again, the changes due to this are likely to be very minor.

My spelling is atrocious and you only get to enjoy readable articles thanks to Sophie who proofs all my articles.  In the writing of today’s article, the autocorrect kept changing what I’d intended to write as “theatrical distribution” into “theoretical distribution”  Whilst I don’t credit my computer with the industry knowledge and satirical intent to be doing this on purpose, it is a sad truth that for all too many films, the two terms are pretty much synonymous.