How far in advance are film trailers released?

24 July '17 4 Comments on How far in advance are film trailers released? 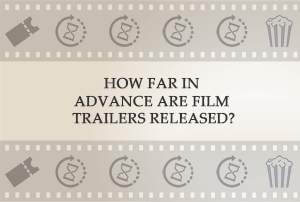 Last week, I took a look at the length of film trailers.  I found that the average trailer runs for 114 seconds, and the longest trailers belong to documentaries and historical films. As I was conducting that research, another question occurred to me – how early are trailers released?

I still remember as a teenager watching the super-early teaser trailer for what would become the 1998 version of Godzilla.  The teaser trailer had a production budget of $600k and featured no footage from the final movie, due to the fact that it was completed before the main movie had even been shot!  This is a rarity but teaser trailers still abound.

Using data from my previous trailer database and publically available release data, I narrowed in on 1,000 movies released between 2000 and 2016, inclusive.  For each movie, I looked at the date its first online trailer was released and then compared that to the movie’s eventual US theatrical release date.

How far in advance are film trailers released? 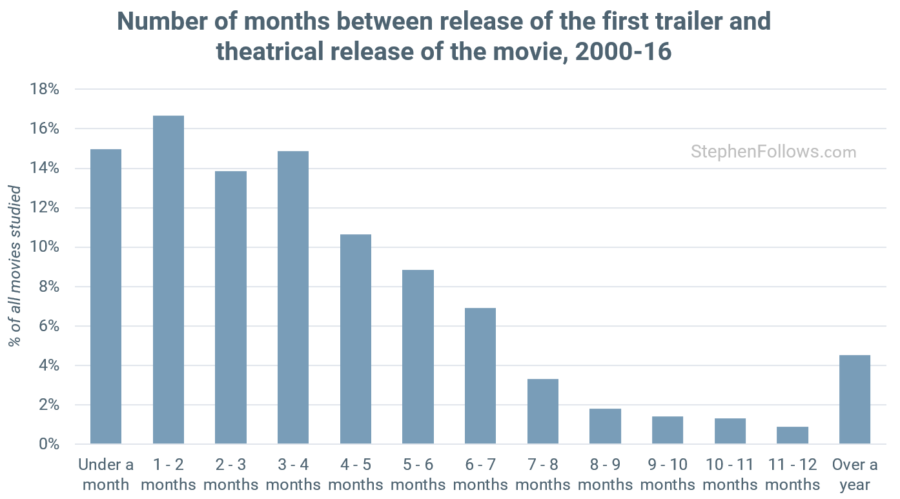 How genre affects the timing

There were significant differences by genre, with the earliest trailers being for movies aimed at families and traditionally expensive genres such as adventure and fantasy.  Animation films typically had their first trailer released 217 days before the movie was released, compared to just 101 days for romantic films. I built my dataset of movie trailer data from a number of public sources, principally YouTube, Trailer Addict, Movie List, IMDb and Wikipedia.  I replied upon IMDb for theatrical release dates, cross-checking them with other sources such as The Numbers and Wikipedia.  I included all trailers, including teaser trailers, so long as they were more than just a logo and the words ‘coming soon’.  For theatrical release dates, I focused on the wide public release, rather than a festival screening.

I’ll leave you with my favourite movie trailer of all time.  Picture the scene:  you’ve been put in charge of creating a trailer for a new feature length documentary about Jerry Seinfeld.  It’s been four years since the end of the TV show Seinfeld, the last episode of which was watched by 76 million people, and there has been no new content from Jerry since then.  What’s more, the documentary features moments with other comedy heroes including Chris Rock, Ray Romano and Jay Leno.

So far, so good.  But here’s the snag – the documentary was shot on MiniDV (a standard definition tape format), in dingy comedy clubs and is largely handheld.  In short, it looks awful.

So how do you craft a trailer which will excite Seinfeld comedy fans without revealing that it’s not the prettiest of movies?  Oh, and Jerry is too busy to appear or to do the voiceover.

See below for what the team concocted.