Last week I took you through all the costs involved in making and releasing a Hollywood blockbuster (budgeted over $100m), and how they earn their income.

This week we’re sliding down the budget range and looking at how films make money on a smaller scale, with a focus on movies budgeted between $30m and $100m.

Like last week, all of the recoupment data I’m discussing today comes from real financial figures gleaned from genuine Hollywood movies.  You can read more about the data sources in last week’s Epilogue.

Before we look at the financial data, we have to talk about the types of movies I’m referring to in today’s article.  Last week, I was able to treat all $100m+ movies as one category because once movies get to that scale their surface differences (genre, etc) become less important than their commonalities (i.e. saturation marketing, being the biggest film in the first week of release, star power etc).  This allowed me to treat them as one type of product.

However, as we start to look at smaller movies we need to subdivide by genre, which presents an extra layer of complexity. I have addressed this problem in the past but, in short, when you use genre to group movies it adds a large degree of subjectivity.  A case in point is The Wolf of Wall Street, which has the following genres assigned to it…

This means that it’s hard to compare statistics generated from different sources, as each will be referring to a slightly different group of movies when they say, for example, “Drama”.  Unless otherwise stated, I have used the IMDb genre classification in the research for this article.

Which genres are most commonly budgeted between $30m and $100m?

Let’s start by looking at what types of movies are typically in the $30m to $100m budget range.  The chart below uses data from The Numbers to show all movies released in North American cinemas between 2001-15 for which there are publicly-available budgets.  The genres have been sorted so that the ones on the left have the greatest percentage of $30m – $100m movies. 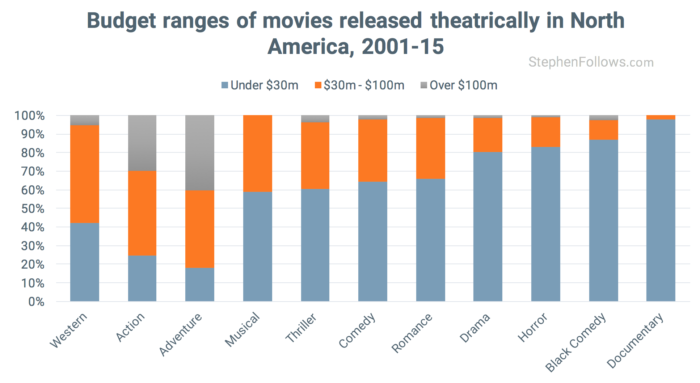 Overall average of costs and income

Last week I went through what costs are involved in making a Hollywood movie, so I won’t repeat myself here.  Instead, I’m going to focus on how the numbers differ between genres across the $30m – $100m budget range.  By analysing financial data from 82 Hollywood movies budgeted between $30m and $100m, I am able to provide a rough average of the costs involved in making and releasing such movies.

It’s worth noting that the variety of movies in the $30m-$100m range, along with the complexities of genre, mean that the figures above should not be treated as “The Single Formula” for all movies budgeted $30m-$100m.  Rather, they show an average across all genres for the movies I was able to get inside data on.

I want to focus on a few of the interesting details from the averages presented above.  First up – marketing. Promotional budgets for Hollywood films budgeted $30m-$100m are fairly consistent across genres, costing on average between 100% and 120% of the production budget. As the revenue journey for most Hollywood films is the same, we are not going to see wildly different income streams between different genres.  Instead, we need to look at the small advantages certain genres have in particular release windows.

Based on my data,  I found that Horror and Family films rely on the theatrical window (38% and 34% of total revenue, respectively) to a greater degree than Action films and Thrillers do (31% and 30%, respectively). This raises the question – why would the kinds of movies that appear to be the least cinematic (i.e. horror, family and romantic films) be the ones that rely most on income from their cinema release, whereas the movies which harness big screen spectacles for their appeal (i.e. action and sci-fi) rely on the theatrical window to a lesser degree?

The answer is not in the theatrical window, but in the value the movie is perceived to have once it reaches the Home Entertainment window (DVD, Blu-ray, etc).   Consumers are more willing to pay money to take home a ‘big screen movie’ than they are to pay for television-style content.

The chart below conveys the money earnt by my 82 Hollywood movies (budgeted $30m-$100m) as a percentage of their production budget.   We can see that Sci-fi, Animation and Action films proportionally earn the most from Home Entertainment, while Thrillers and Romantic movies earn the most from the television window. Genre also plays a big role in the money earned in other revenue streams.  Merchandising can be very lucrative but only for animation, family films and certain comedies (i.e. those with clear, brandable characters). Other revenue streams – Airline and Music

Airlines and Music is a relatively small income stream but in the huge numbers of Hollywood economics, this can still mean millions of dollars.  Many of my films combine the two elements (i.e. income from screening the movies on airlines and the income from a cut of sales of music related to the movie) but overall, the Airline component accounts for 83% of the total “Airline and Music” income.

Films which perform best in this revenue stream are similar to those which perform well on television, namely Thriller, Drama and Romance.  Perhaps unsurprisingly, Horror films don’t seem to play well on aeroplanes. Producers and studios often try to hide the true cost of their movies from the public and so only some movies have publicly available budget figures online.  Using data from The Numbers, I looked at what percentage of movies had a public budget figure, splitting the results by the domestic theatrical box office gross (i.e. cinemas in US and Canada). As you can see above, the films with the smallest grosses have the most opaque data online, with 89% of films grossing under $1 million managing to keep their budget a secret.  However, once films get a certain profile it becomes hard to prevent some informed source leaking the info, meaning that only 9% of films which grossed over $10 million managed to keep their budget scale private.

The box office and publicly-available budget data for today’s work came from The Numbers and Box Office Mojo.  The private data which underlies the revenue calculations comes from a variety of industry sources.  See last week’s Epilogue for more details about this.

Next week I’m going to look at profitability and the week after that I will turn to movies budgeted under $30 million.