How the genre of film production changes around the world Last week, I shared the results of a research project I conducted into the genre of global film production.

Today, I’m drilling into those numbers to look at how filmmaking tastes change between different countries.

This comes from my dataset of every movie I could find that was produced over the past twenty years – that’s over 117,000 movies from in 151 countries, shot between 1998 to 2017, inclusive.

Let’s start by breaking down the movies into continent of origin and then later we’ll zoom into the individual nations.

Which continent’s filmmakers lead each genre

The chart below shows which continent movies of each genre come from, over the twenty-year period I studied. For example, 50% of all Historical movies made over that time came from European nations.  Additional proof that European filmmakers have an above average interest in historical topics comes from the second and third genres they are highest in, which are Biographies and War movies.

Europeans are less keen on Horror movies (only making 22% of all horror movies made), Westerns (21%) and Action movies (19%).

Their South American neighbours prefer to make Westerns, Biographies, and Musicals. Asian filmmakers are the top producers of Action movies, Animations and Musicals, while African filmmakers have their best showing among Romances, Musicals and films about music. 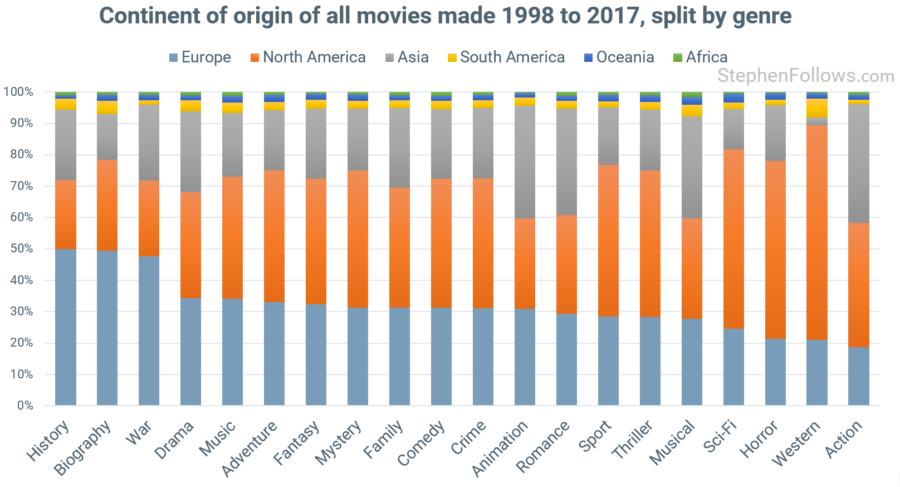 Let’s zoom in further. In order to produce meaningful results, I focused on the fifty largest producing nations over the period (i.e. the countries which made the most films). For each, I looked at what percentage of their movies were Dramas, Comedies, Thrillers, etc.

For example, 39% of films made in Malaysia over the two decades had Comedy as one of their three genres.  The charts in this article show the ten countries with the highest percentage of films within a particular genre, as well as the ten lowest.

So for Comedies, Malaysia ranked third, behind Egypt (whose output was 45% Comedy) and the Czech Republic (40% Comedy).

Last week, we saw that just over half of all movies have Drama as one of their (up to three) genres.  Dramas are most common from filmmakers in Israel, where almost four out of every five movies made is a Drama.

Other dramatic nations include Bulgaria (70% of movies were dramas), Serbia (69%) and Romania (67%). At the other end of the spectrum, only 32% of films from Malaysia are Drama – the lowest of the fifty biggest film-producing countries.

Apparently, the UK is the world’s most thrilling film nation – who knew?! So while the rest of the world may see Brits as sedate, tea-drinking talkers, their film output contains the highest percentage of Thrillers of all major film-producing nations.

Other top Thriller-heavy nations include Commonwealth countries such as Australia, Canada and New Zealand (plus the UK’s ex, the USA).

Japan and Iran produce the lowest share of Thrillers, at under 4% each.

45% of Egyptian movies are Comedies, making it the genre’s most committed nation.

At the other end of the spectrum, Iran, Nigeria and Bangladesh don’t seem so keen on producing Comedies.

While Bangladeshi filmmakers may eschew Comedy, they love Action, with a third of their movies being action-oriented.

Over a quarter of films from Hong Kong are Action movies, along with a fifth of Indian movies.

America is the world’s largest producer of horror movies, by a long shot.  But if instead of looking at the volume of movies made, we focus on how much of a percentage of their total film output are Horror movies, they’re fourth behind Indonesia, Thailand and Malaysia.

If six Lords of the Rings movies weren’t enough of a clue, New Zealand is the home of Fantasy filmmaking.  Almost 10% of all movies made in New Zealand over the twenty years I studied were Fantasy movies.

As we saw at the start, European nations feature very highly among the biggest producers of historical movies.

The data for today’s article came from a variety of sources, including IMDb, Wikipedia and Movie Insider.  This research is focused on fiction feature films (so not short films, TV movies, documentaries, etc) and includes all movies produced, not just those that were released in cinemas. I allowed each movie to have up to three genres, which was derived as an aggregate of all the sources listing that movie.

For the notes referring to continents, I counted the following countries as in both Europe and Asia: Russia, Turkey, Kazakhstan, Georgia, Armenia and Azerbaijan.

It’s worth noting that we’re measuring production numbers, not amount spent, meaning that a micro-budget film has the same weight as a mega-studio tentpole.  This instinctively feels like a better measure of a nation’s filmmaking tastes, as otherwise a country could make 660 micro-budget dramas and play host to one Hollywood action film and the nation’s output would be classed as “50% action movies”.