A few years ago, I looked at what genres are disproportionately popular with cinema audiences around the world.  We learned that Italians enjoyed more comedies, that Asian nations love action, Europeans love drama and that romance burns brightest among Mexican film fans.

That study looked at how films were received in cinemas, but a few weeks ago, it occurred to me that there was another group of people whose genre tastes we could measure – the filmmakers making the movies.

So I set about building a database of the movies made in each country and what genre they are.  Now, I’m willing to concede that the scale of the research I did for today’s article was slightly out of proportion with the value of its findings, even by my standards.  By the time I’d finished, I had tracked 117,134 movies made in 151 countries over the past twenty years. So I’m going to split the results into two articles.

What in the world are filmmakers making? 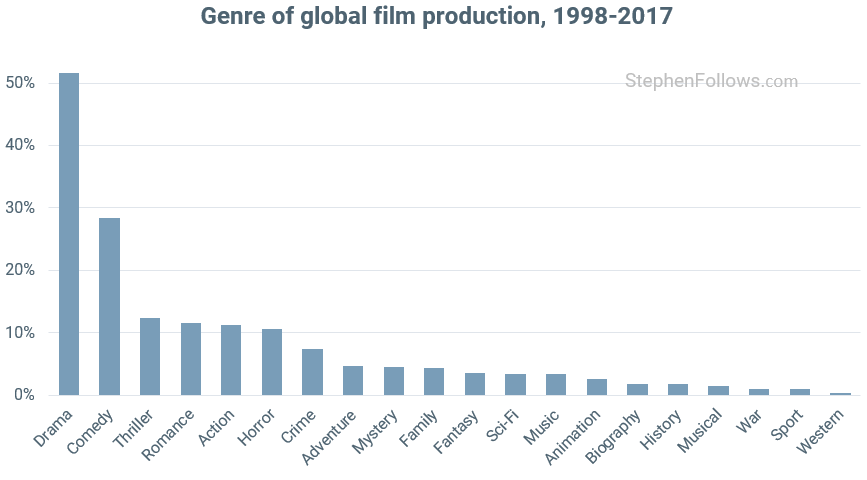 Note: Some of today’s charts may add up to more than 100% as each film could have up to three genres.  See Notes section at the end of the article for details.

The dominance of drama as a genre is perhaps not surprising when we consider the following:

Film marketers often complain that “Drama is not a genre”, insofar as it doesn’t give the potential audience member any clues as to what to expect.  Conversely, simply stating that a movie is a Western conveys a great deal of information about what may be on offer, including time period, location, tone, plot elements, character tropes and more.

The data from today’s research suggests that the broad nature of Drama may be further compounded by the sheer number of such movies on offer.  With so many films claiming the Drama moniker, audiences may find it impossible to form useful genre-wide expectations, unlike the narrow pool of Westerns.

How are film production levels changing over time?

Global film production is booming, thanks in large part to new technologies.  It’s cheaper and easier than ever before to shoot, edit and distribute a feature film, not to mention the effect of the internet in sharing ideas, knowledge and advice.

It’s not possible to give a definitive figure for the exact number of films made each year but the growth can be viewed through a proxy, such as the number of new feature films listed on IMDb each year.

IMDb currently has 12,597 feature films listed as having first been released in 2017 – twice the figure for ten years ago. Which genres are growing in popularity?

In my research last year into horror movies, I showed how the horror genre has grown incredibly in the past decade or so.  Twenty years ago, horror movies accounted for 4.3% of all movies made, whereas in 2017 they represented 12.4%.

Other genres which are growing in popularity are History, Sci-Fi and Biography. Which genres are waning?

Filmmakers seem to have much less love for Romance than they once did.  In 1998, 15.9% of movies made were Romances whereas last year it was just 7.6%. That being said, they’re also losing interest in War movies, along with Action and Crime movies. Remember that these charts show the relative interest, not the raw number of films made.  Global film production is increasing and so even if a genre is comparatively less popular than it once was, there still may be more movies made in that genre than in previous years.

For example, although romantic films make up a smaller percentage of movies made, their raw production numbers are still increasing.  In 1998, there were 410 Romance movies made globally and in 2017 the figure stood at 887.  Their numbers may have doubled but because global film production quadrupled over the same period, they appear relatively less popular.

The data for today’s article came from a variety of sources, including IMDb, Wikipedia and Movie Insider.  This research is focused on fiction feature films (so not short films, TV movies, documentaries, etc) and includes all movies produced, not just those that were released in cinemas.

I allowed each movie to have up to three genres, which was derived as an aggregate of all the sources listing that movie. Across the dataset, the average movie had 1.7 genre classifications. The 20 genres I included were Action, Adventure, Animation, Biography, Comedy, Crime, Drama, Family, Fantasy, History, Horror, Music, Musical, Mystery, Romance, Sci-Fi, Sport, Thriller, War and Western.

It’s worth noting that we’re measuring production numbers, not amount spent, meaning that a micro-budget film has the same weight as a mega-studio tentpole.  This instinctively feels like a better measure of a nation’s filmmaking tastes, as otherwise a country could make 660 micro-budget dramas and play host to one Hollywood action film and the nation’s output would be classed as “50% action movies”.

Next week I’m going to look at which countries prefer to make which genres.