There a number of clear signs you’re getting older; Policemen look younger, music gets louder and more unintelligible and you start complaining more often about “How could they possibly remake that movie?”

Personally, I think part of the outcry against any upcoming Hollywood remake is in fact misplaced anxiety about the passage of time and the ever-closer creeping inevitability of death, but I guess that’s a debate for a different blog. While you’re still around to complain, would you like to see the stats on Hollywood remakes?  ‘Course you would…

The case for Hollywood remakes

Hollywood is constantly on the search for “new ideas” and where better to find those “new ideas” than in movies they’ve previously made – everything was new once, right?  So if you’re a cigar-chomping Hollywood exec and you want to breathe new life into an old franchise with the hope of creating a new generation of paying fans then you have a few options… The idea of remaking a successful movie is about as old as film itself.  The fourth horror film ever made, The Haunted Castle, was an English language remake of the first horror film, Le Manoir du Diable, which was a French film made a year earlier in 1896.

There are a number of films you may not realise are Hollywood remakes or reboots, including…

Note: Today I’m only measuring official remakes, not films which were clearly borrowed from one another, such as the retelling of Point Break under the title The Fast and The Furious (see here for a comparison). I think many people will be surprised to hear that there are fewer Hollywood remakes than 10 years ago but bear in mind that when a remake is successful then it may spawn other films (sequels, prequels and spinoffs) which won’t be classed as remakes or reboots.  For example, Batman Begins is a reboot of the Batman franchise, but The Dark Knight and The Dark Knight Rises are just sequels.

Therefore, to get a true picture of Hollywood today we need to combine the data from this week’s research on Hollywood remakes / reboots with last week’s data on sequels, prequels and spinoffs. 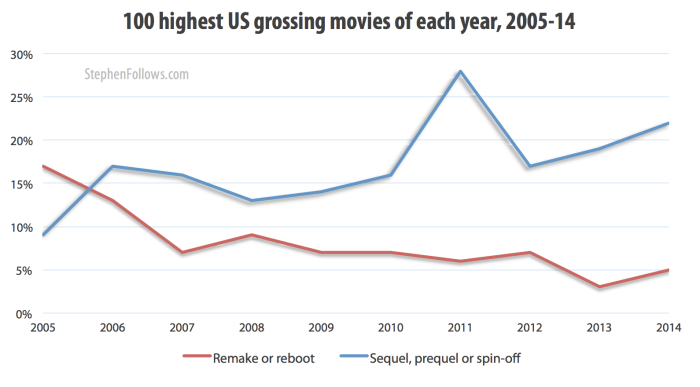 Which genre features the highest percentage of Hollywood remakes? Brace yourself, more are coming 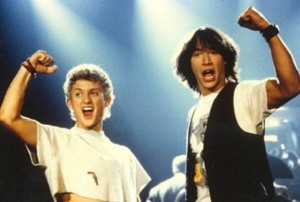 are numerous reports of movie classics which are being developed for Hollywood remakes.  Many of these films won’t make it to the big screen as Hollywood develops far more scripts than it actually produces.  However, as superhero movies go from great to grating, we should expect to see many more Hollywood remakes in the coming years. These include A Prophet, A Star is Born, About Last Night, Agent 47, Akira, All of Me, All Quiet on the Western Front, American Psycho, An American Werewolf in London, Barbarella, Bill and Ted’s Excellent Adventure, Cliffhanger, Commando, Death Note, Drop Dead Fred, Escape From New York, Flatliners, Flight of the Navigator, Frankenstein, Gremlins, Headhunters, Heat (not the good one, thank God, this is the Burt Reynolds 1968 film), Highlander, Honey I Shrunk The Kids, IT, Jacob’s Ladder, Jumanji, Logan’s Run, Mortal Kombat, Overboard, Point Break, Police Academy, Poltergeist, Porky’s, Rebecca, Short Circuit, Soapdish, Starship Troopers, The Birds, The Craft, The Crow, The Fantastic Four, The Mummy (yes, again!), The NeverEnding Story, The Orphanage, The Seven Samurai, The Wild Bunch, Three Men and a Baby, Time Bandits, Timecop, Tomb Raider, Van Helsing, Videodrome, Wargames, Waterworld, Weird Science, Wild Bunch and xXx to name but a few.

When I decided to look at originality in Hollywood movies I didn’t think that the hardest topic would be Hollywood remakes.  Some of the topics which came up include…

What started out as a single article on originality in Hollywood ballooned into three and yet I still don’t feel fully sated.  When measuring originality it’s not enough to simply look at the lineage of the script or characters.  Unfortunately this is all that I can do at this stage but hopefully the day will come when I can command a fully intelligent AI and force it to read 1,000s of scripts to objectively measure the creativity therein.  Of course, the worry then would be that reading so many Hollywood blockbuster screenplays would either diminish its faculties or cause it to lose its newly-found will to live.  Ah well, that’s a problem for future me.