How good are movies which pass the Bechdel Test?

7 April '14 4 Comments on How good are movies which pass the Bechdel Test?

I should start this article with a personal note – I don’t like what I’ve found. I always try to approach data impartially and not look for certain results. Inevitably, this sometimes leads to results which challenge my beliefs or my opinions.  I am a firm believer that the representation of women on screen is often woefully poor and needs addressing.

Last week the guys at FiveThirtyEight published a great analysis of the box office performance of films which pass the Bechdel Test. My first thought was ‘damn’ as I have also been working on a similar study. They have been extremely thorough and it’s well worth reading their article. In order to avoid repeating their work I have shifted my research to look at how good the films that pass the Bechdel test are. Using data from IMDb, Rotten Tomatoes, Metacritic and bechdeltest.com I studied 4,983 films made in the past 120 years. In summary…

By all four measures, films that fail the Bechdel Test score higher than those that pass. 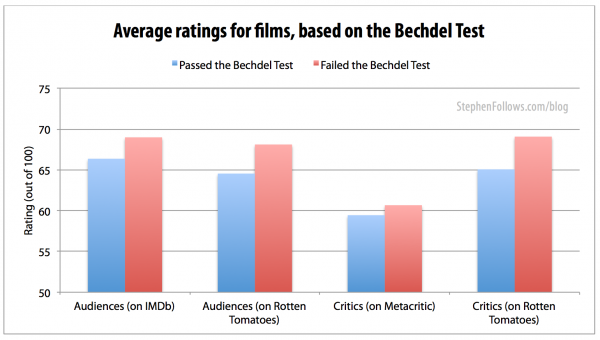 Reasons for failing the Bechdel Test

When we break down the results we see that the highest rated films are those which feature fewer than two named female characters. Honestly, I don’t know. Here are a few personal theories…

If you have any suggestions please leave a comment below and I’ll add them to the list above.

This topic has an inherent bias, in that we only know if a film passes the Bechdel Test if someone has taken the time to view it and report the result. In order for my results to have any scientific basis I would need to be looking at an impartial subset of films, not just those which have been reviewed on bechdeltest.com. The 5,000-odd films on bechdeltest.com have been selected purely on the basis that the reviewer wanted to watch them. In order to address this possible bias I looked in more detail at the top 100 films from 2011, 2012 and 2013 (300 films in total). The results were broadly the same, albeit less pronounced. This leads me to suggest that the trend is still applicable to recent films. I have looked at gender within the film business a few times.  You might enjoy these previous articles…