How old are Hollywood film producers?

14 September '15 1 Comment on How old are Hollywood film producers? In the past few weeks I’ve looked at the age of action heroes, Hollywood screenwriters and Hollywood directors, and now I am finishing the journey by looking at the age of Hollywood film producers.

Older than directors and screenwriters

Ever since I mentioned I was going to be looking at the age of producers I’ve been swamped with guesses.  The average age of screenwriters of films released in 2014 was 46 years 10 months and directors were slightly older at 49 years 6 months.  Most people I spoke to correctly guessed that producers are, on average, older than writers and directors. 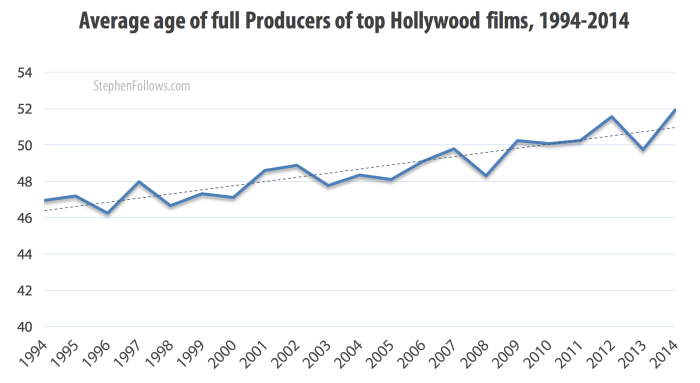 The genres with the oldest and youngest film producers Other types of Hollywood film producers

The main findings above looked at people who received the full “Producer” or “Produced by” credit.  I also researched other producer credits but it proved harder to find date of birth data.  For producers, I found 64% of dates of birth, for Executive Producers I found 45%, 25% for Co-Producers and 18% for Associate Producers. Although I don’t regard this as enough data to provide robust findings, I did find that Associate Producers tended to be a lot younger (average age: 41) whereas Executive Producers’ ages are very similar to that of full Producers. How do the age of producers compare to directors and screenwriters?

Only 20% of Hollywood film producers are under 40 years old, compared with 30% of directors and 42% of screenwriters. Film producers ages have risen the fastest, growing 11% between 1994 and 2015. Average ages of Directors and Screenwriters have also been growing but by a smaller margin (9% and 4% respectively). 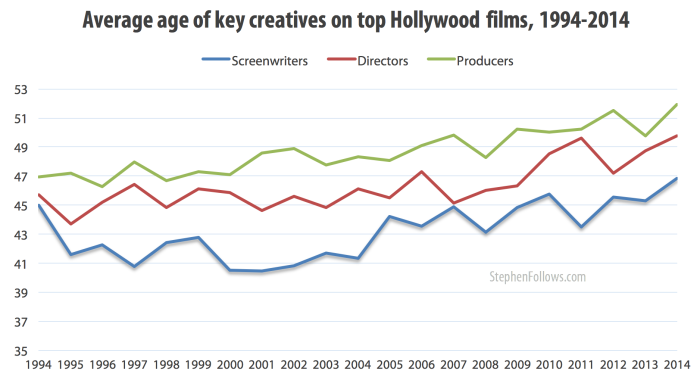 I wasn’t sure what the reaction would be to this age research into Hollywood creatives but the most common response I’ve seen is “Phew – I’ve still got time”!