How old are Hollywood directors? The youngest director of a top 100 grossing film in the past two decades is Allen Hughes, who co-directed the 1995 film Dead Presidents.  The second youngest director is just nine minutes older than him: his twin brother and co-director, Albert.

The oldest director is technically James Algar, who was one of eight directors credited to Fantasia 2000.  At the date of the film’s release James would have been 88 years old, had he not died two years prior.  Fantasia 2000 is an updated version of the 1940 classic Fantasia and James directed the “Sorcerer’s Apprentice” sequence.

So if we want to look at who was the oldest Hollywood director actually on-set then Clint Eastwood takes the top spot.  And the second spot.  And third, fourth, fifth and sixth.  My research looked at films released between 1994 and 2014 so Clint’s latest film, American Sniper, fell just outside the cut off, with a release date of 16th January 2015 (at which point Clint was almost 85 years old).


Are Hollywood directors getting older or younger? 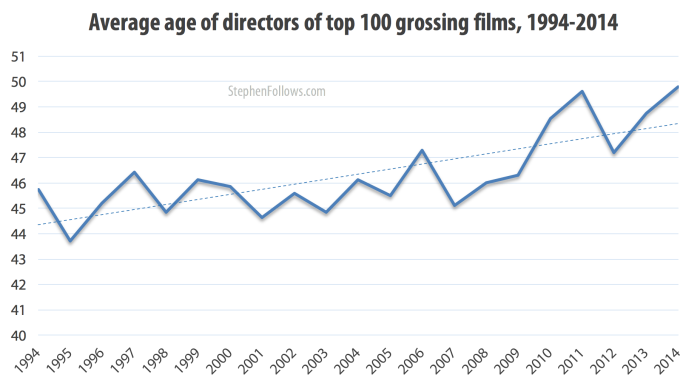 Does the average age change between genres?

Yes, but only slightly.  Horror films have the youngest directors, with their average age on the day of the film’s release being a sprightly 42 years 6 months and 24 days. The genre with the oldest directors is Historical – where directors are on average 51 years, 11 months and 20 days old. Today’s study was started by people asking me to look at the topic.  If you have something you want me to investigate then drop me a line.