How much of UK distribution will the new Disney Fox company control? 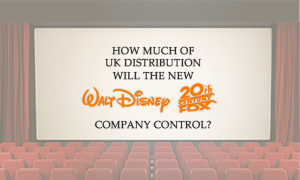 Last week’s media news was dominated by the acquisition of 20th Century Fox by the Walt Disney Corporation.

There’s no doubt that this represents a huge shift in the dynamics of Hollywood as ‘The Big Six’ (studios) become ‘The Big Five’.

How the two mega-companies will work together in practice won’t be known for a while but that hasn’t stopped people speculating about the effect it will have on the entertainment sector. As regular readers know, I’m not a fan of speculation, so I shall sit out this particular pontification party.

That said, I have been asked by a few readers for data on how much of a market share the newly enlarged Disney company will have within UK distribution.

So I took a quick look at how big both Walt Disney and 20th Century Fox’s UK distribution arms have been historically.

How many films do Disney and Fox release in the UK?

Neither Walt Disney nor 20th Century Fox actually release all that many movies.  Last year, there were 1,017 feature films released in UK cinemas (yes, that is a crazy number, but that’s a separate topic). Only 4.1% of those movies were released by Fox and just 1.9% by Disney. Therefore, the new Disney Fox Co. would only account for 6% of movies in UK cinemas.

This obviously ignores the fact that those will be some of the biggest, and highest grossing, movies of the year.  Therefore, we should instead be measuring box office gross.

How much do Disney and Fox movies gross in the UK?

Movies released by Disney and Fox in the UK in 2016 grossed just over half a billion pounds – more than twice the figure from 2007. To get a better sense of what the new Disney Fox merger will mean for UK distribution, we should take a look at market share.

In 2016, the two companies combined accounted for 38.9% of the UK distribution market, as measured by box office gross. Regulators often get concerned when a company controls more than 25% of a market (meaning that they have ‘monopoly power‘ over that market, although not a complete monopoly, obviously).  This puts the new Disney Fox company right in the crosshairs of the UK’s Competition and Markets Authority.

Only time will tell how the new Disney Fox Co. will choose to tackle this problem and how the UK government will respond. For now, all we can say is that the effect of the merger will certainly be felt at the top end of UK distribution sector.

The data for today’s piece came from comScore, the Film Distributors Association and the BFI.  The UK market includes the UK and ROI.  Historic Disney data includes its Buena Vista brand.