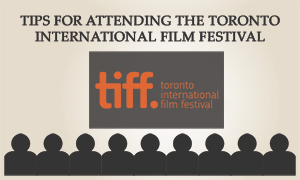 The film industry is good at generating wisdom but not so good at disseminating it.  A case in point is all of the tips and tricks learnt by attendees of a festival or market.  The first time someone attends they spend the first half of their trip totally lost, but after a few days they start to get the hang of it, thanks in part to the things they learn from their fellow attendees.  Everyone new feels like they have got the hang of it exactly at the moment it finishes. We then all return to our four corners of the globe, only for the same cycle to play out the next year.

And so I have taken on the task of collecting some of this hard-earned wisdom and sharing it before the actual events.  Earlier in the year, I surveyed attendees of Cannes and Berlin film festivals and now it’s the turn of Toronto International Film Festival (TIFF).

I contacted industry delegates of the upcoming TIFF and asked them about their past experiences.  In total, 236 delegates shared their views, with a collective history of 1,655 years worth of TIFF parties, films and industry events.  Here is their advice…

#1 – Locate the best events. I asked my respondents which organisations run the best parties during TIFF.  In the past, I have asked the same question of people going to Berlin and Cannes, and in both cases the Scandinavian events came out on top.

However, in this survey of TIFF delegates I’m sorry to say that the Scandinavians have lost their top spot and are only the third most popular.  Sorry, Anna!  But bronze is nothing to feel too down about. The organisations who run the most popular events are TIFF are (in order):

Other popular events were those run by:

#2 – Don’t skip the TIFF-run events. There was also high praise for events run by TIFF themselves, with frequent mentions of their cocktail parties and filmmakers’ lounge.

#3 – Plan your parties carefully as there are too many to attend all of them. Last year, the Tracking Board’s 2015 TIFF Party Grid tracked 126 parties and I’m sure the true figure is slightly higher.  Based on last year’s data, we should expect the busiest nights for parties to be the Friday and Sunday nights. #4 – Be nice to TIFF staff and volunteers. A number of respondents commented that they felt TIFF was a particularly well-run festival.  A large number of volunteers keep TIFF running (3,059 in 2015) and they were praised for being helpful and nice to chat to.

#5 – See the city. The city of Toronto also came in for kind words and many suggested putting a little bit of time aside to see the city.  The trains and trolly system are rather good and you could also rent a bike.

#6 – Wifi can be woeful. It may be hard to find good Wifi because the TIFF free connection gets quickly clogged by the huge number of festival attendees.  If you’re in urgent need of connecting then be creative about where to get Wifi, such as coffeeshops and restaurants.

#7 – The first weekend is where it’s at. The first weekend of any festival is usually the busiest time, and TIFF is no exception. 95% of people attending will be there on Saturday 10th September, with the next most popular days being Monday, Sunday and Friday. #8 – It’s a marathon rather than a sprint. Most attendees are planning to be at TIFF for at least five days, with the average stay being seven days. #9 – TIFF has amazing movies – go see them. TIFF has a well-earned reputation for quality movies, and movies at TIFF go on to earn more Golden Globe and Oscar nominations than movies at any other festival.  Therefore, even if you’re primarily going to do business, you need to carve out some time to see some movies. #10 – Plan your movie-going. If you plan on seeing a number of movies then it will pay to do some planning before the day starts.  Mark out on a map where the venues you need to get to are, and when you do your scheduling bear in mind time to eat.

#11 – Turn up early and be prepared to queue. Show up early to movies to ensure you get a seat (at least 30 minutes before, even if you have an industry pass).  A few people mentioned that they are issuing more badges than they used to and so lines are longer than they have been previously. On the flip-side, the people you meet in the lines can often be good contacts or good for some interesting conversation. 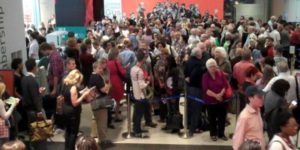 #12 – Don’t take ‘sold out’ for an answer. Many of the movies which are listed as ‘sold out’ may have tickets on the morning of the screening due to newly-realised tickets.

#13 – See all types of movies. TIFF offers a wide range of movies, some of which may not ever make it to cinemas so take advantage of this diversity and see things you wouldn’t normally.

#14 – Don’t overlook the smaller movies. Don’t necessarily to try see the biggest movies which everyone is talking about.  TIFF has a high bar for movies so even those no-one is talking about could be hidden treasures and you’ll get to ‘discover’ new talent.

#15 – Be strategic about which screening you head to. When planning which movies to see, take into account which only have one screening.  Things become less busy towards the event of TIFF, so don’t fight to get into a packed screening in the first weekend if the same movie is also playing later in the week.

#16 – TIFF has great Q&As. Stick around for the Q&As after some of the movies.

#17 – Screen etiquette is important. Don’t text or use your phone during the movies.  This may come as a surprise to industry professionals who are used to the way people act in Cannes market screenings but it’s far less de rigeur at TIFF screenings.

#18 – Plan, plan, plan and plan some more. There are far more movies, events and people than you can possibly engage with during your time at TIFF, so it’s essential that you take the time to read up before you arrive.  The TIFF website has a whole host of schedules and fact sheets which you should read cover to cover before attending.  Then you can prioritise what you want to see or attend.

#19 – Be prepared to be offline. Download the festival schedules and guides onto your phone or tablet.  Wifi can be hard to get and you’ll want to have all the info to hand at all times.

#20 – Locate your fellow countrymen and women. When you first arrive, take the time to head over to your country’s representatives, such as the UK Film Centre.  They will be able to help you get your bearings and there may be events they can invite you to.

Using the official delegates list I took a look at who attends TIFF. Americans slightly outnumber Canadians, followed by the Brits, French and Germans. 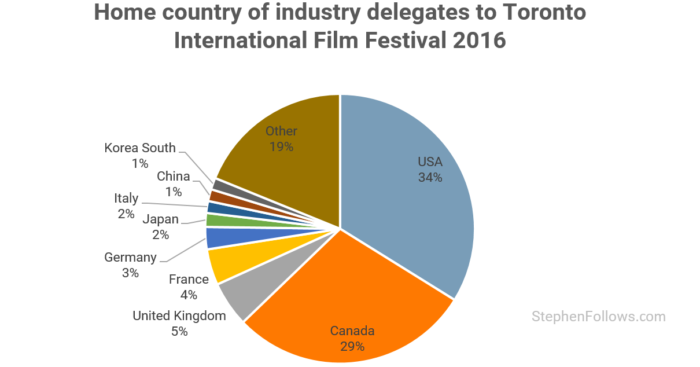 #21 – Be nice to your feet. Wear flat, sturdy shoes as you’ll be doing a lot of walking.

#22 – Bring the power. Bring a portable charger for your phone or tablet.

#23 – Business meetings are rarely spontaneous. If you’re going to do business then set up your meetings in advance.

#24 – Meet centrally. Try to hold meetings as centrally as possible (close to the TIFF Lightbox or the Hyatt hotel) to save time for you and whoever you’re meeting.

#25 – Stay hydrated. In the flurry of meetings, movies and people it’s easy to forget to drink water.  Dehydration leads to headaches and exacerbates the other exhausting effects of TIFF.

#26 – Bring energy boosts. If you’re at TIFF to see movies then remember to have a few snacks (such as protein bars or fruit) in your bag at all times.  You don’t want to miss out on a movie because you’re hungry and have to grab some last-minute food.

#27 – Free finger food abounds. If you’re attending TIFF industry events then food won’t be a problem as most events will have some form of free catering.

#28 – Toronto has good restaurants outside of TIFF. Toronto has a nice Chinatown so try and eat there at least once.

#29 – Know what your networking game plan is. There are all sorts of people who attend TIFF and so if you’re attending with a particular aim in mind then you should consider what types of people you need to put the most effort into trying to meet.

Using the official delegates list, I had a look at who’s attending TIFF 2016. (Note: People were permitted to give up to two roles). #30 – Bring business cards. This is a must for all industry events and it’s one of the main things said to first-timers going to Cannes, Berlin, TIFF and every other industry shindig.  Despite this, at every event you’ll find a few people who run out, have brought the wrong type or, worst of all, are left writing their details on cocktail napkins as they didn’t bring any.

The ideal business card is:

#31 – Use business cards like a pro. Likewise, whenever you receive a business card, after the person has left, take out a pen and jot down a few words about how you met that person.  After TIFF is over, you’ll be able to comb through the hundreds of cards you’ve collected and know who each person was.  You can then send follow up emails with lines like “Great to meet you at the Mongrel House party in TIFF…”.

#32 – The relaxed atmosphere makes networking easier. TIFF is more casual than Cannes so you should feel more free to politely approach people you don’t know.

#33 – Bring warm and cold clothing. No-one can agree on the weather, and a scary number of people seem to ascribe to the folk law that “it gets cold after the first weekend”. So bring both suncream and an umbrella.

#34 – Collect zzzz’s while ye may. Get plenty of sleep in the few days leading up to TIFF as you’ll need it by the time the madness of TIFF begins.

#35 – Relax. You may get overwhelmed. Try to relax and enjoy the festival and the city.  You can’t possibly expect to see every movie, attend every event or meet every person you want so make your peace with that now.

Is your top TIFF tip missing?  Add it in the comments below or drop me a line via my contact form.

During TIFF I’ll be chairing a panel on data tools in the industry and speaking on another panel about gender inequality.  If you’re at either, come up and say hello! 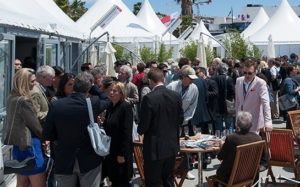 I am interested to see how the Brits act in TIFF.  In Cannes we seem to only chat to one another and in so doing come up with the most marvellous bullshit.  This year, I started to note down some of the wonderful / terrible things I overhead.  You can read the full list at the bottom of this article stephenfollows.com/british-films-in-cannes and here are a few choice phrases to get you started: