10 February '20 16 Comments on What is happening to Second Unit Directors? Something strange is happening to the role of second unit director… and I don’t know why.

I have crunched the data in a number of different ways and spoken to a fair number of industry insiders but I remain none the wiser as to what’s causing the trend we’ll see today.

I don’t normally publish results I can’t explain, but in this case, I’m stumped.  My hope is that intrepid readers will have theories I can test or insights into what’s shifting within the industry.  (I’ll be sure to update this article if I do ever find a satisfying answer).

Let’s start by familiarising ourselves with the role of second unit director and then we can turn to the mysterious trend.

What is a Second Unit Director? 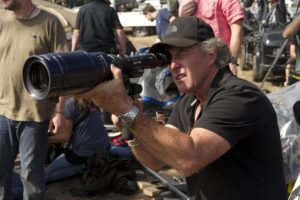 A Second Unit Director is, well, the director of a film’s second unit.  The main unit is what most people think of when they picture a film being shot.  The film’s main director is working with the cast to shoot the main scenes of the movie.  But this is often not the only unit on a production.   There may be additional units which specialise in filming tricky elements (underwater, miniatures, aerial, stunts, etc) or units designed to save time or money by standing in for the main unit.

In some cases, a second unit will be picking up incidental shots which wouldn’t be worth paying a full main unit to do, such as establishing shots of locations, extreme close-ups,  crowd scenes – basically anything that doesn’t feature the main cast.  However, that’s not always the case.  John Mahaffie, who directed the second unit on the three Lord of The Rings films, estimated that 20% of his work was with the main cast, with the other 80% being things like “guys in black hoods with black horses chasing [Gandolf] on a white horse“.  He described his work thus:

For all intents and purposes, we operate as a stand-alone unit—independent. And my role as a second-unit director is, first of all, to be in tune with the style of the main-unit director and the action requirements, and to be intuitive as to his priority for the look of the film and how the film is to go together. But then once I’ve taken that…I’m on set with a full crew of 120, 150 people.

Second units are often called in to handle complex physical challenges such as special effect sequences.  On action films, this could mean that the second unit director was behind a fair chunk of the final screentime and perhaps most of the film’s trailer.  The second unit director reports to the film’s main director and is working to match their vision for the film. However, it’s perhaps not surprising that when Casino Royale was released, many people noticed the similarities of the action to the preceding The Bourne Identity, as the two films shared the same second unit director, Alexander Witt.

In other cases, the second unit directing credit may go to someone who shot some pick-ups, re-shoots or a single scene.  In the Marvel cinematic universe, some directors are credited as a second unit director for shooting the post-credits preview of the next movie, on which they are the main director.  One example is Joss Whedon who received one such credit on Captain America: The Winter Soldier for a scene he had shot during his time at the helm of The Avengers movies.

In conducting this research I was surprised to see that some rather famous names have second unit credits.  For example, Steven Spielberg has received four credits as a Second Unit Director (including on Star Wars: Episode III – Revenge of the Sith) and Peter Jackson has two (including on The Adventures of Tintin: The Secret of the Unicorn).

Now that we know the role of a second unit director we can turn to the data to see what’s happening over time.

In 2006, a third of all movies in US cinemas credited a second unit director, whereas by 2018 this had fallen to under a fifth. This decline surprised me as I couldn’t see what change in the industry would precipitate fewer films needing a second unit.   So I set about probing the data to locate the cause.

Is this due to a greater number of films without second units?

My first thought was that the increase in the number of films released each year was flooding the market with smaller films (more on that here). Smaller, independent titles are less likely to have the required budget for a second unit.

However, when we isolate just the top 200-grossing movies of each year, we can see that there remains a decline. My next thought was that perhaps the types of films were changing, moving away from films that require additional units.

In which genres are Second Unit Directors more prevalent? Could a shift in genre production be behind our missing second unit directors?

No. The decline in second unit directors is to be found across all major genres, albeit to varying degrees.  The chart below shows two five-year periods – 2000-04 and 2014-18.  The biggest drops are among horror and thriller movies, whereas the most resistant genres are sci-fi and adventure movies. And in some of the genres which employ many such directors, the decline is rather stark.  The chart below illustrates the picture for action movies. 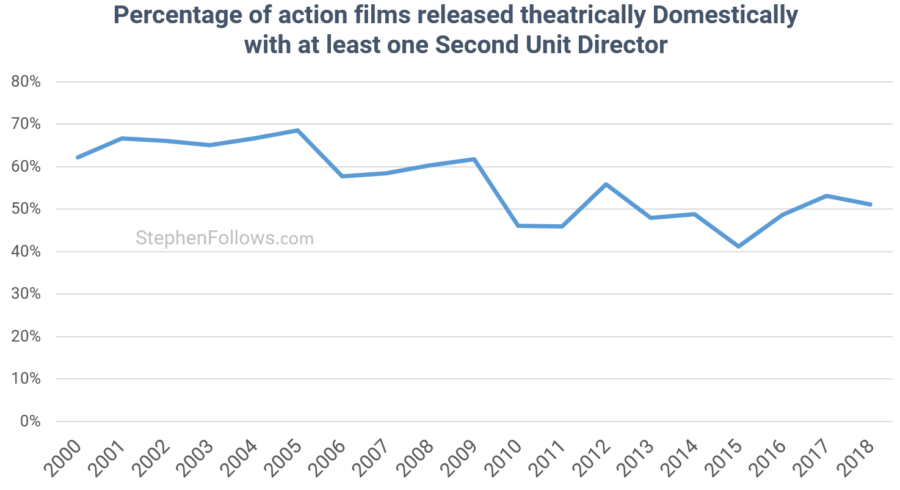 At this point, I was stumped and so reached out to a number of working second unit directors. I’m grateful to everyone who gave suggestions.

A couple of interesting theories that came up, and which I have investigated with the data, are:

So, having ruled out quantity, genre, budgets and first-time directors, I’m left without a working theory.  Perplexing….

This project is looking at live-action fiction feature films which were released theatrically in North America between 2000 and 2018, inclusive.  I focused on live-action films as I am considering the on-set role of second unit director.  Animated films do have “Unit Directors” (e.g. The Tigger Movie has seven) but this is an entirely different job.

I did not include films released in 2019 as some credits can take time to appear on online credits sites.  A few years ago, I studied the number of credits which the producers had not automatically added when listing their movies on sites like IMDb.  If the crew member in questions wishes to have their work recognised, they must manually apply to the site.  Based on today’s data, I calculated that around 6% of 2nd unit directing credits were not automatically added by the studio when they list their film.

Thank you to everyone who answered my questions for this piece. If you have a theory or suggestion of what’s happening, either leave a comment below or reach out to me directly.