Hollywood sequels by the numbers Last week’s article on how original Hollywood movies are had such a great response that I’ve rushed out a sequel featuring many of the same characters.  Not only that, but I’ve twigged that I can split the follow-up into two parts to maximise my audience.  (I may have been studying Hollywood for too long…) This week I am looking at Hollywood sequels and next week I will be addressing remakes and reboots.  I looked at the 100 highest US grossing films of each of the past 10 years, focusing on Hollywood sequels and prequels.  In summary…

Are there an increasing number of Hollywood sequels? Which genres are most sequel-friendly?

Almost half of all the money spent on Adventure and action films in the past decade has gone to sequels or prequels. By contrast, only one romantic comedy sequel has appeared in the top 100 grossing films of each year 2005-14 – Think Like a Man Too. Has Hollywood always been hot for sequels?

My research looked at the past 10 years and, as we’ve seen, shows a big increase in Hollywood sequels.  To put this trend in a wider context I looked at some extensive research carried out by Stuart Henderson, author of The Hollywood Sequel: History & Form.  He was kind enough to share with me his dataset of film sequels, prequels and series released in North America between 1910 and 2010. 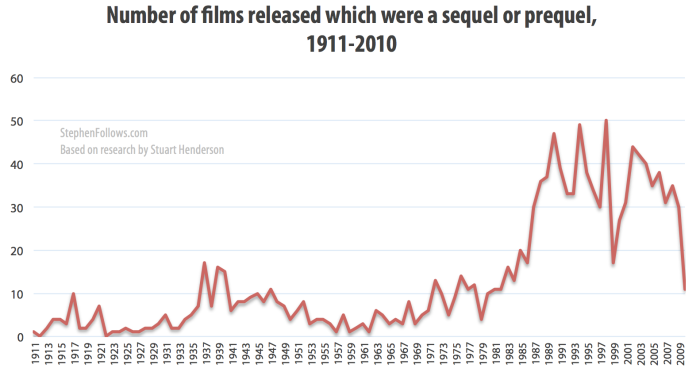 In the early days of film, Hollywood loved producing films within a series but which were not direct sequels. There were at least 19 film series each with over 10 films, and the biggest was The Durango Kid which included 64 films between 1945 and 1952 (yes, that’s more than nine a year on average). Whether a film is a sequel or just part of the overall series is a fine line.  Stuart Henderson says “The difference between a sequel and a series film as I see it is that the latter films, although they feature recurring characters, almost never acknowledge the events of previous films in the series”. Using Stuart’s definition, we can see that Hollywood used to be very keen on non-sequel series films but that this has given way to more direct sequels and prequels. So is the idea of a film series dead? No, it’s just changed.  The standalone films within a ‘film series’ have largely given way to an abundance of Hollywood sequels, prequels and spinoffs under the banner of ‘franchises’. Of the top 50 highest grossing films of all time, 33 films reference events which took place in another film on the same list.  They are Harry Potter (8 films), Tolkien (6 films), Transformers (3 films), Pirates of the Caribbean (3 films), Marvel universe (3 films), Fast & Furious (2 films), Nolan’s Batman (2 films), Shrek (2 films), Ice Age (2 films) and Star Wars (2 films).

Researching film series bring up a number of questions, the answers to which are highly subjective. These include…

Because of points like these, I’ve not been able to take my usual method (i.e. using an objective set of specific criteria to create a robust, complete dataset to measure and spot trends).  However, I can take individual film series and look at them as anecdotal case studies. Examples of when the second film costs considerably more than the original (all budgets have been adjusted for inflation)…

The vast majority of Hollywood sequels cost more than their originals.  I could only find a few exceptions to this… I gathered my Data from IMDb, The Numbers / Opus, Box Office Mojo and Wikipedia. Stuart Henderson lists his data sources as…

Of his dataset, Stuart says…

Inevitably, the information included here is not exhaustive. There are no doubt certain films which have not been captured by my research, particularly in the period between 1911 and 1929, where the available records are unlikely to be complete. Nonetheless, I believe this represents a relatively comprehensive and representative set of data, which gives a reasonably accurate impression of the levels of sequel and series production over the past century, and the broad range of films which might be bracketed under those terms.

You can buy Stuart’s book The Hollywood Sequels: History & Form, 1911-2010 on Amazon by following this link.

Next week I will be presenting the third article in this apparent trilogy, on the subject of remakes and reboots.  Let’s hope that I’m not replaced by Andrew Garfield in an attempt to reboot the blog or the current generation.