How many films are made around the world?

5 October '15 14 Comments on How many films are made around the world? And so I thought I would show how many films are made worldwide, to put the UK numbers into perspective.  In summary…

Reliable data is hard to find for many countries so it’s not possible for me to provide as up-to-date information as I’d like.  According to 2011 figures, India’s “Bollywood” is the largest film producing nation, responsible for a whopping 1,255 films.  Nigeria’s “Nollywood” is close behind with 997 films, followed by America’s “Hollywood” with 818 films. 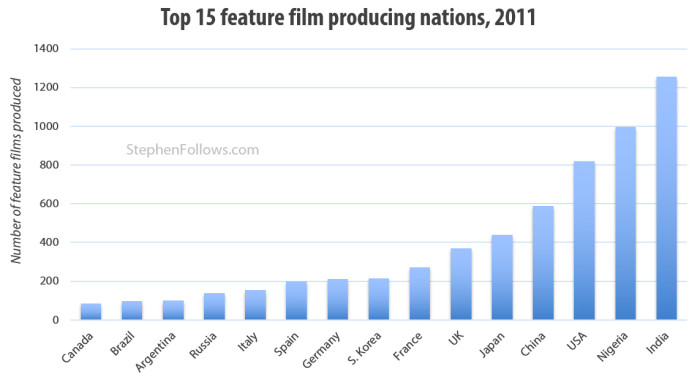 Edit: It’s worth noting Nadia Denton‘s comment at the bottom of this article.  She is the author of the The Nigerian Filmmaker’s Guide to Success and doesn’t feel that the often reported numbers about Nollywood are the true picture. She says “When UNESCO wrote their report a few years back and quoted the industry as being one of the largest in the world, it’s clear that the people who did the write up did not make a distinction between DVD producing and theatrical releases”.

How is this changing?

Sadly I can’t find reliable figures for each of the top producing countries but we are able to track the change in production for many of the top countries. This shows that South Korea has seen the largest growth, increasing producing by 81% in the past six years.  All countries within this list are increasing production, apart from the UK, which saw an 18% reduction between 2007 and 2014.  (See my previous articles on the fall in UK film production and the comments of the UK film industry to read more on this). Does it matter how many films are made?

Yes and no.  Obviously the raw number of films being made each year is not in-and-of-itself useful, but they can give us clues to how the film sector is faring in each country.  The overall picture of growth is down to cheaper technology and free access to information means that it’s never been easier to make a feature film.  But with a one-film-one-vote system, we don’t get a window into other factors such as employment, the quality of the films or the total amount of money spent.

Notes on the data

Film data geeks in the UK get a little spoilt as we have so many sources of information about the film industry in our country.  The BFI track and report on a huge number of metrics and the vast majority are freely available to everyone.  As we start to look at other countries we see how patchy, inconsistent and sometimes downright wrong their data sources are.