How many screenwriters does it take to write a movie?

24 February '20 1 Comment on How many screenwriters does it take to write a movie? Over the next few weeks, I am aiming to answer a number of readers’ questions around screenwriting.

To do so, I have built a dataset of all live-action feature film movie credits over the past seventy years, covering over 280,000 movies and 145,000 people. We’re going to start with a straightforward question and in the later weeks look at more complicated topics.

First up, let’s look at how many people are credited as being a full writer of feature films.

How many writers work on a movie?

In Hollywood, screenwriting credits are strictly regulated by the Writers Guild of America (WGA).  Only three parties are allowed to be credited as the writer (with a ‘party’ being either a single writer or writing teams of either two or three writers).  This means an absolute maximum of nine writers per movie, in the unlikely event of three three-person teams working on the film.

In addition, each writer’s contribution has to pass a certain threshold to be recognised.  This means that someone who added a few ideas, characters or lines of dialogue may not be officially credited.  They should still be paid for their work but they cannot claim to officially have written the movie and wouldn’t be mentioned on any awards the film wins.

This shadow economy of writing is not something we can track as, by definition, it’s hidden from the public.  However, we can look at all the people who get a full writing credit.

Almost exactly two-thirds of movies only credit one person as the main screenwriter, with a further 16% crediting two people and 6% crediting three.

The 2% of movies that have more than ten writers are a mix of non-union productions and portmanteau films, made up of separate segments. How has the number of writers per movie changed over time? 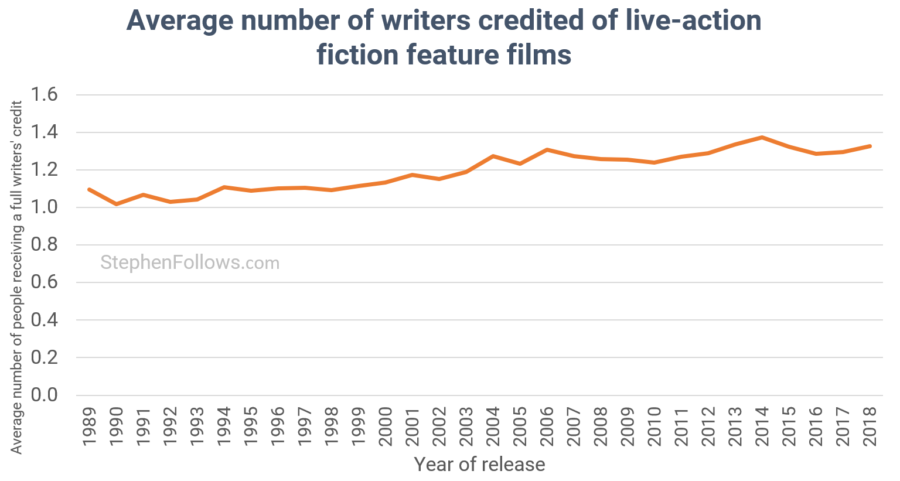 A final finding for today came from looking at the differences between genres.

Adventure films are the least likely to have just one official scribe, whereas dramas are most likely to be written by just one person. Today’s research looks at live-action fiction feature films (i.e. not animations or documentaries).  It covers all films made, not just those released in cinemas.  The raw data came from IMDb, The Numbers / OpusData and Wikipedia.

In this research “a full writing credit” is defined as being listed as a main writer on the films.  This excludes supplementary writing credits such as being the author of the source material, the creator of characters or receiving credits such as “story by”.  I don’t wish to diminish the value of these credits, nor the work that can sit behind them, it’s just that this project is focused on what most people think of when they refer to a film’s writer(s).

This project is looking at live-action movies, in part because the system for crediting writers on animated projects differs. For example, the 1998 Disney Mulan credits 31 people with various types of writing credit.

If you enjoyed this article you may also enjoy the following past pieces:

Now that I have built this dataset of writing credits, I can use it to answer other questions.  If there’s anything you’d like to know, drop me a line or leave a comment below.

Next week we’re going to look at how many screenwriters write a second movie.