3 December '18 8 Comments on Is the number of box office flops increasing? In the last few weeks, there has been a resurgence of news articles about movie flops (sometimes called ‘box office bombs’).  These have been sparked by recent under-performing releases such as London Fields, Robin Hood and The Nutcracker and the Four Realms and fueled by the public’s Schadenfreude at watching big movies fail.

A few readers have asked me about the wider trends behind flops, so I thought I’d turn to the data to have a look.

The very first thing to say on the topic is that whether a movie has flopped is often a subjective judgement.  A small number of releases will have failed by everyone’s measurement but many box office disappointments will only be regarded as flops by some people.

For the purposes of this article, I’m going to define a flop as: A feature film which received a wide domestic theatrical release, but which domestically grossed under half of its production budget.

In the film industry, “domestically” means in America and Canada and a “wide” release is where the film was available in at least 600 cinemas in a single week.  So a film which cost $50 million to make but which grossed under $25 million in American and Canadian cinemas could qualify. Later, we’ll add in the worldwide gross and see how that changes things.

3,033 fiction feature films have had a wide domestic release between 1st January 1999 and 1st December 2018 and so these will form our core dataset. (The Notes section at the end of the article gives more details about my criteria and methodology).

How many “domestic flops” have there been? Over 40% of all historical films which opened in a wide release over the ten years I studied flopped (by my definition) – unlike animations, where only 12% failed to hit the mark. 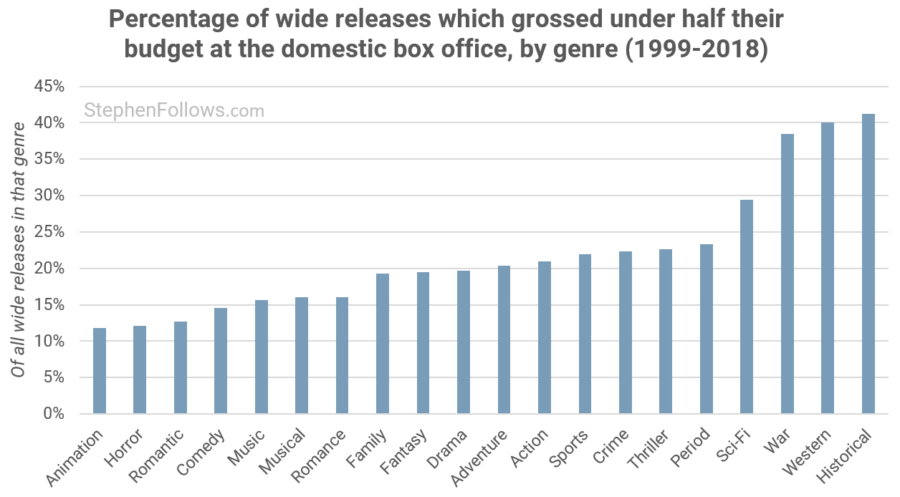 How is the ‘flop rate’ changing over time?

Interestingly, the number of disappointments was declining throughout the 2000s, only to start rising again from 2012. It’s not possible to generate a single definitive list of “the biggest flops” in any meaningful sense as there are so many factors to take into account.  Is it the amount of money lost, or the percentage of the budget which matters?  How much did the Studio spend on marketing? Did the film do well on other media after it left cinemas?

However, in order to give you a few easy examples to bear in mind when thinking of flops, below are the twenty films which have the largest numerical difference between their publicly-stated budget and their domestic box office gross (wide releases 1999-2018):

The scatter plot below shows all 544 movies which managed to fall below my flop standard.  As you can see, some were quite narrow flops while others were clearly massive failures. Did these movies lose money? You may assume that if a movie under-performs in cinemas then it will surely have lost money for its investors.  The truth is a little less clear-cut.

A movie’s domestic box office performance is often a good clue as to how audiences are responding to it.  A surprisingly low gross would indicate that the movie is unlikely to reach profitability. However, most modern movies are released globally and so far we have only been tracking the North American box office.

The worldwide box office has far less reliable data than the domestic market.  We have to take into account currency changes, missing data, false data (i.e. Chinese box office data can sometimes be quite suspect) as well as widely varying business terms between studios and cinemas in each country.

What we can do is fall back on an industry rule of thumb.  This states that a movie has a high likelihood of having turned a profit if its worldwide box office gross is twice that of its production budget.  I have covered profitability in detail before (links below) and this rule of thumb is a little crude.  However, it will allow us to identify which ‘domestic flops’ were most likely to have been saved by a strong international performance.

Just fourteen of our wide domestic flops performed so well internationally to pull them up to this bar.  These were:

A further 26 of our flops grossed over 150% of their budget worldwide, missing the general rule but not by much. There’s also the rare case where movies have insured their losses by agreeing “pre-sales” with distributors before the movie is finished.  This was the case with Valerian, which was third on my previous list of biggest flops and yet director Luc Beason was quoted as saying “With Valerian, we’ve covered 96% of the budget with pre-sales“.

Finally, we must remember that theatrical box office performance is not the sole measure of a movie’s success.  Some movies can dramatically underperform in cinemas only to do very well in other media.  Both the original Blade Runner and The Shawshank Redemption performed very badly in cinemas but are now highly successful, both artistically and financially.  The technique we used above would fail us in these cases.

So maybe the Home Entertainment market will be kind to London Fields.  Or maybe a fierce VOD bidding war for the rights to show Robin Hood will lead Netflix to pay $80 million and tip the movie over into profitability.

I mean, that absolutely will not happen but, in theory, it could.

Here a few of my previous articles which delve deeper into the topics raised today:

If you want to read more on the topic of mega-flops I highly recommend grabbing a copy of Fiasco: A History of Hollywood’s Iconic Flops by James Robert Parish.  It covers the story behind a number of doomed productions including Cleopatra, The Cotton Club, Waterworld and Last Action Hero.  A great read about some incredible, epic stories – both in front of and behind the camera.

The data for today’s research came from Box Office Mojo, The Numbers/Opus, IMDb and Wikipedia.  I found budget figures for 96% of the movies in the dataset, although it’s impossible to know how accurate these figures are.  These budget figures relate to the production of the movie, not to its marketing or distribution.

When conducting research on topics like this, it’s impossible to avoid subjective decisions.  Here are the decisions I made when defining my dataset:

As I mentioned at the top, my definition of a bomb is just my calculation for this article.  There is no objective standard and other people may draw the line in other ways.

This research is focusing on flops, i.e. movies which massively under-performed financially.  There is another class of movies which are often conflated with bombs but which are different – turkeys.  A turkey is a movie which is judged to be very poor by critics and audiences.  This is a topic for a future article… 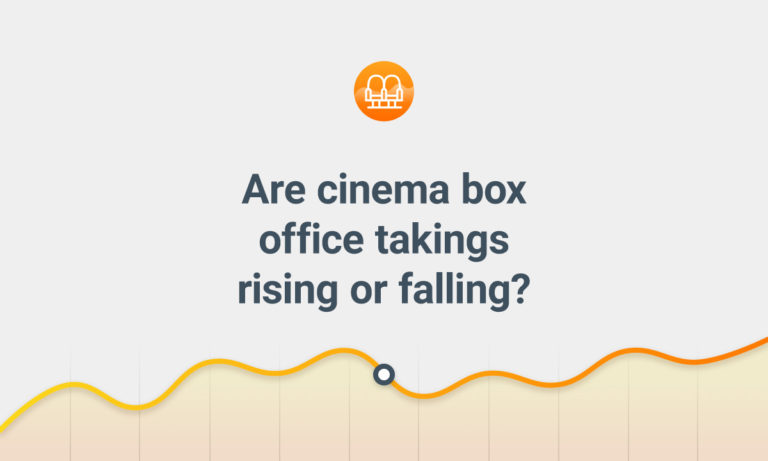