15 May '17 2 Comments on How important is international box office to Hollywood? Today I’m responding to an email I received from James, who asked how important international box office revenue is to Hollywood studios.  It’s a great question as it’s at the heart of one of the major trends affecting the film business in the 21st century.

In film industry terminology, “domestic” box office revenue means the money collected in cinemas in the US and Canada, while money grossed in cinemas anywhere else in the world is classed as “international”.

The growth of the international box office

I built a dataset of all movies released between 1990 and 2016 and looked at their domestic and international box office revenues.  Let’s start by focusing on how much of the money collected by movies from the big six studios came from the domestic market.  As the chart below shows, over that 36-year period, international revenues have dramatically increased, as a share of global box office revenues. 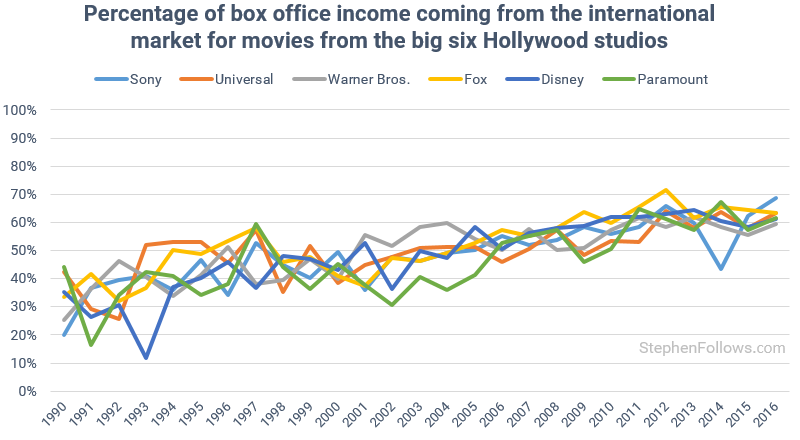 Let’s simplify the chart above, and show the same data as one unified average. 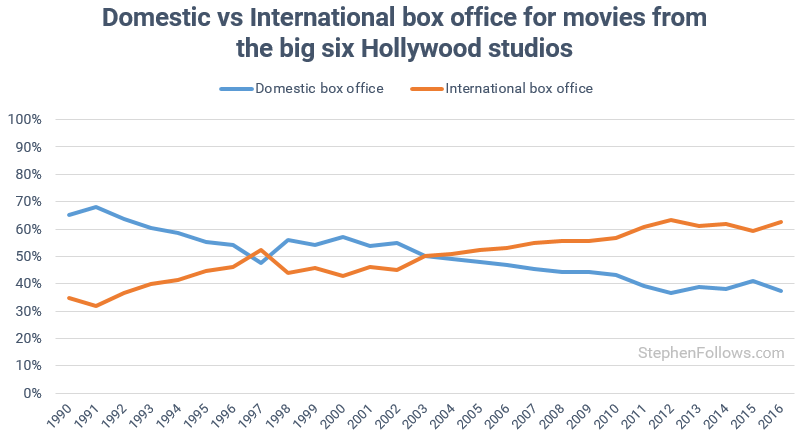 The first time international box office revenues for Studio movies surpassed domestic was in 1997, mostly due to the strong global performance of just three films: Titanic (70% of the global intake came internationally), Men in Black (57%) and The Lost World (63%). But it wasn’t until 2003 when international revenue dominated the domestic market for good.

Where is this growth coming from?

The growth of the international market is down to a few factors, including: China is now the second-largest cinema market in the world, followed far behind by the UK, Japan and India. It’s worth noting that far less of the Chinese box office revenue actually makes it back to the Studios when compared to other countries.  If you want to know more about that, or other aspects of the Chinese market, then you may want to read: The rise and rise of the film business in China.

Before we finish, I wanted to briefly touch on how this change has affected different genres of movie. It’s often said that comedies have a hard time travelling out of their home country due to the regional nature of humour, use of cultural references and reliance on linguistic devices such as puns which only work in their native language.  However, it could be argued that Hollywood has dealt with these problems by focusing on broader, more visual comedy output.  As a quick illustration, below you can see the box office split for the top comedy stars in Hollywood movies between 1997 and 2016. To read more about how different genres perform around the world, check out a study I performed with Bruce Nash from The Numbers on behalf of the American Film Market last year: The relative popularity of genres around the world.

Data for today’s article came primarily from Opus Data, with the country data being pieced together via data from the Motion Picture Association of America (MPAA) and IHS.

It’s worth noting that we’ve been focusing on box office revenue, not Studio income.  When we talk about box office revenues we mean the total amount of money handed over by cinema ticket purchases.  In order to determine how much the studios will actually receive, we need to remove taxes (such as VAT), the cinema’s cut and the costs and fees of any middlemen (in some countries the Studios use local distributors).  You can read more about this in these articles: