How much does it cost to exhibit at the Cannes Marché?

1 May '17 8 Comments on How much does it cost to exhibit at the Cannes Marché? In just over two weeks, the Cannes Film Festival and Marché will open its doors, commencing twelve days of drinks, deals, dailies and daring new cinema (plus a fair amount of double-dealing, dehydration and depression). It’s the biggest date in the film industry’s annual calendar, both for celebrating the best new movies (via the festival) and negotiating distribution for movies of all levels of quality (in the film market).

I have covered Cannes for a few years now, so there are a number of older articles which you may find interesting or useful.

Today, I will be looking at the costs involved in exhibiting and advertising at the Cannes market.

A quick primer on the Cannes Marché Geographically, Cannes is a small French city on the French Riviera and is home to 73,000 odd people (sorry, 73,000-odd people).  However, to film professionals “Cannes” refers to two big events – the Cannes Film Festival (officially called Festival de Cannes) and the Cannes Film Market (a.k.a. le Marché du Film).  Although the two events are connected by location, time and a central body, they represent two very different sides to the film world.

In the middle of these two events are a lot of people who don’t have movies screening at the festival and who aren’t buying or selling film rights.  These will include investors (enjoying the glitz), producers (looking to sucker in investors with glitz), filmmakers (trying to stand next to the glitz for a quick selfie) and people trying to attract filmmakers (agents, lawyers, national film bodies and prostitutes).

Today’s piece is focusing on the act of selling a movie in the Cannes Marché.

The cost of a booth in the Cannes Marché 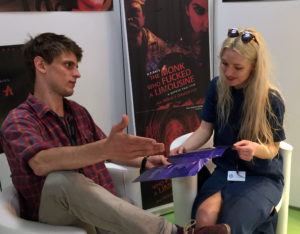 When selling film rights in Cannes, you’ll want to have a physical presence somewhere so that you can put up posters, offer promotional flyers, screen trailers and hold meetings.  Most companies opt to hire a booth in the main festival building, the Palais. The Palais is the building with the huge red carpet, upon which movie stars gracefully climb towards yet another cinematic triumph.  However, if instead you go through the nondescript doors to the right of the stairs and head down to the basement level, then you will reach the market booths.

The first level you’ll reach is called “Palais -1”.  These have the cheapest booths, along with niche sections such as Short Film Corner and Doc Corner.  If you walk through the central aisle you’ll reach a set of escalators which take you into the back of the building called “Riviera”.  Finally, one more set of escalators up will take you to the highest point in the market, called “Lerins“.

And finally, the Lerins level costs €6,425 for the basic booth and €449 per additional square metre.  That’s 15% more than Riviera and 45% more the Palais -1.  Lerins booths have risen by the smallest margin over the past ten years, growing by just 4.4% in ticket price (which is actually 7.3% less than ten years ago, when accounting for inflation).

Whichever booth you go for, you’ll receive the following package:

Other options for exhibiting

If you don’t fancy being in the hubbub of the Palais building, then you could follow some companies who choose from the other options. These include paying for a small base in one of Cannes’ ‘Business Hubs‘, including:

The three options listed above include a market pass (worth up to €332.50), a hostess to greet visitors or schedule meetings and access to a backroom storage facility.

Another option is to hire a hotel room.  Some companies strip out the beds and turn them into temporary offices and showroom space. I don’t have exact costs for doing this, but to give you a sense of scale, as a paying guest one night in The Grand will set you back €980 per night during the festival (the same room a week earlier is half the price).  Likewise, staying in a standard room at The Majestic during the festival costs €815 per night, whereas in the week before the festival it’s just €205 per night.  I’m sure a festival-long booking would result in a discount, however, most companies seek out the expensive sea-view rooms, so that they can hang banners from the balcony for all to see.

Finally, you could choose to go all out and organise your very own pavilion in the International Village.  These are normally used by national film bodies, looking to promote filmmaking in their country or region, but in theory anyone can hire a spot if they have enough Euros. In years gone by, the Kodak pavilion was much loved for its free food and drink (I don’t have the data on how much of Kodak’s bankruptcy in 2012 was due to this strategy). The basic plot in the International Village has 25m2 of pavilion space and a further 25m2 of terrace backing right onto the beach costs €17,025. Each additional square metre of pavilion space costs €454 and terrace space is priced at €227.  This will get you:

Once you have an empty pavilion you now need to fill it, staff it, plan events, host guests and so much more.  This can add up.  For example, a few years ago I looked into how much the BFI spends on the British Pavilion.   The average cost between 2012 and 2016 was £390,000 per year.  These were paid out via three lottery awards:

The cost of advertising during the Cannes Marché

Even once you have your booth, table or pavilion and have got all the staff, flyers and materials, you may need to shell out yet again, to let market attendees know about you and your films/services.

Fortunately for you, the Cannes Marché offers a number of ways to get your message out there.  Below is a summary of some of the advertising opportunities at this year’s market, along with their rate card price. And finally, if you want to get your advert into the hands of all market attendees, you may wish to consider some of the sponsorship opportunities in the tote bags given away free with every pass.  This includes:

Much of the data on the costs came directly from the Cannes Marché literature and website.  I have not added on the French VAT when providing prices because international exhibitors can claim this back.

Today’s topic is something I have experienced first hand. Nine years ago, I acted as a producers’ rep for a number of films which were seeking distribution.  I had a little booth in the market and held meetings with distributors and broadcasters interested in acquiring the rights to the movies I represented. It showed me a whole different side to Cannes than I had seen before, and consequently, I have the utmost respect and sympathy for people stuck in that market during daylight hours.

So today’s article is dedicated to those poor folk, who are right now working like mad to get their materials ready, to take on a ten-day pitching and deal-making marathon. I salute you.