How are movie advertising budgets spent?

18 March '19 4 Comments on How are movie advertising budgets spent? The marketing of movies is a fascinating topic. There is an inherent contradiction, because it is both very visible and highly opaque at the same time.

We see movie marketing every day on almost all possible platforms and yet filmmakers struggle to learn about the economics of how it works.

To help with this, I am going to take a look at how money is spent to market movies in the UK. This article is based on professional industry estimates of marketing spend for 1,288 movies released over the past decade (more info in the Notes section at the end).

How are movies promoted? According to Nielsen Media Research, £229.5 million was spent advertising movies to the British public in 2017.

The spend is broken down into five categories:

The split between each of these mediums has shifted over the past decade.

In 2009, 58% of movie marketing was spent on television advertisements. While this has been declining (it was 49% in 2018) it remains the biggest outlet for movie promotion by far. The second largest is outdoor advertising, accounting for 22% in 2009 and growing to 28% in 2018.

Press advertising has shrunk over the past ten years from 10% to 6%, and radio has bounced around 3% over the same period. Unsurprisingly, online advertising has seen the largest growth, from 7% in 2009 to 15% last year. 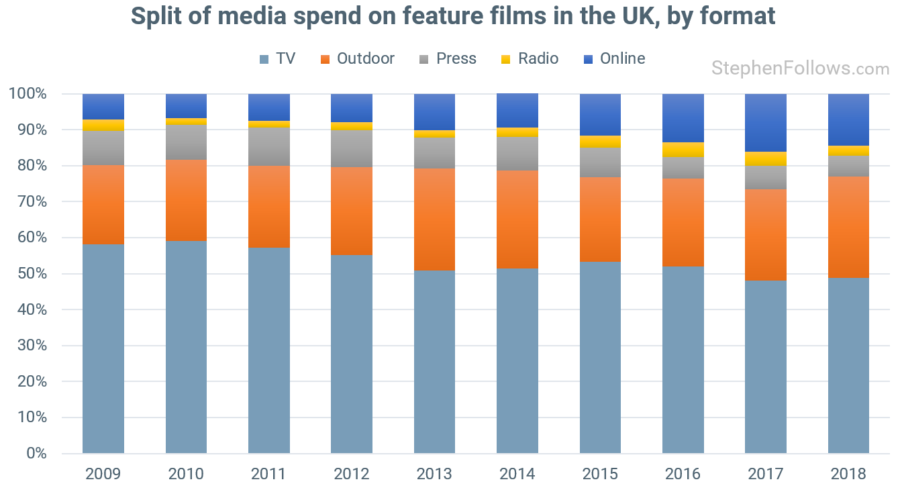 Despite the relative increase over the past ten years, many filmmakers may be surprised how little is spent online when compared to television or outdoor ads. Our lives may be lived far more online than ever before but movie advertising is still mostly an offline affair.

Which marketing platforms are best suited for each genre?

Each movie will have its own bespoke marketing plan, managed by the distributor. They also initially foot the bill, hoping that the returns will be enough to repay their investment. More on that later in the article.

Before we get to that, let’s look at how the mix of media money differs between genres.

The genres which rely most on television are Romance (57% of total spend was on TV), Horror (56%) and Comedy (55%). Though Biographical films have the lowest reliance on television marketing, it still accounts for just under 50% of their total media budgets. 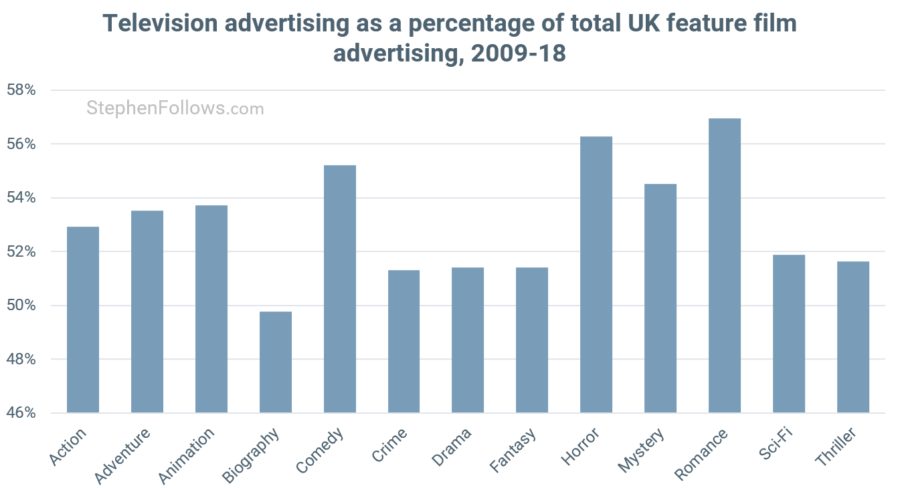 Fantasy and Sci-Fi films have the greatest proportional spend on outdoor marketing (29% and 28%, respectively). These genres tend to be sold on their epic nature and want to convey their ‘otherworldliness’. The inverse of this is Romance and Biographical films, which are often sold in more personal ways and consequently have the lowest proportional spend on outdoor ads (21% and 23%). Biographies and Dramas reply most on printed press spending. This is for a combination of reasons, including: Interestingly, the genre with the biggest relative use of radio is Horror, perhaps because audio is a powerful way to scare people. Horror also comes top for online advertising. The online audience tends to be younger than that of other advertising media, and also contains more people in the lower end of the industry’s social scale – both factors reflected in the audience for horror (see more on that here). Online advertising is the hardest to track, meaning that rival estimation methods can result in wildly different totals. Despite this, many industry watchers feel that the industry is underspending online, relying instead on older formats which may feel more familiar or safe. A recent study of 70 movie releases in America concluded that 46% of box office revenue was driven by digital advertising, despite accounting for just 14% of studio marketing budgets.

How does marketing spend compare to box office income?

Almost all the money the distributor will spend promoting a movie will be committed before the movie is released. Therefore, they won’t know if they have spent wisely until the movie opens in cinemas and starts collecting money from the paying public.

For each movie I have the marketing estimate for, I also have the eventual UK cinema box office total. This allows us to see how connected the two figures are.

Just over one in ten movies spent more on their marketing than they grossed at the box office (i.e. a multiple below 1). At first glance, you may infer that the other 89% of films were in profit, but before that, we need to consider what ‘gross’ means.

I have previously covered this topic in detail so I shall be brief here. To get a sense of the net income to the distributors we need to first deduct VAT (currently 20%) and the cinemas’ share (we’ll assume it’s 50% for ease but there’s more on that here).

Furthermore, distributors tend to take their fee out before the marketing costs are repaid. This means that the multiple would need to be nearer 3.5 in order for any money to be passed back to the sales agent (who then takes their fee and costs, returning any leftover money to the filmmakers).

This is a bar which 55% of UK releases over this period failed to cross. If over half of releases are unlikely to recoup enough to cover their marketing costs, why are distributors spending so much money marketing movies?

There are a few reasons:

I have researched a few related topics before: Today’s data includes professional estimates of media spend for 1,288 feature films released in UK cinemas between 2009 and 2018, inclusive. I also had access to over 50 real, line-by-line media budgets for recent UK releases in order to check the efficacy of the estimates.  I am very grateful to the people who gave me data for today’s piece. I would have liked to give more information about sources, and granular level data on individual films, but I have agreed not to as a condition of using the data.

The genre classifications are from IMDb, which assigns up to three genres per movie. For the charts which break down the results by genre, I focused on the thirteen genres in which I had media spend data for at least 100 releases (between 2009 and 2018).

The illustrative figures I used for cinema and distribution fees are just rules of thumb and it will differ for each movie. In the past, I have researched typical fees for cinemas, distributors and sales agents. How do film budgets change as they grow?