1 November '21 1 Comment on How frequently do actors produce movies they star in?

The tragic shooting on the ‘Rust’ set is still playing out, in the legal system and in the media. It seems that Alec Baldwin could face two sets of issues – both as the actor who fired the deadly bullet and as a producer of the movie on which the crime occurred.

This has prompted a few readers to get in touch to ask about the prevalence of actor-producers on modern movies.

In order to find out how common it is for performers to produce (or producers to act, depending on your perspective), I looked at the data behind all live-action movies released in US cinemas between 2000 and 2019.

How many actors also produce the movies they in?

Of those actors who did receive a producer credit, 55% were full “Producer” credits, 29.5% were Executive Producers, 6.1% Associate Producers, 8.1% Co-Producers and 1.2% some other form of producing credit.

An example of a movie with an unusually large number of actor-producers is the 2007 horror film ‘Spiral‘, which had five actor-producers. Two actors (Ryan Chase and Lori Yohe) were Executive Producers, two more (Zachary Levi and Joel David Moore) were credited as Associate Producers and one (David Muller) was a Co-producer.

Which genres are most likely to be produced by their star?

Comedy is the third most popular genre for actor-producers, and is also the home territory of the most frequently credited people in this research, namely:

You can read more about acting and producing in these past articles:

The data for today’s research came from a variety of sources, including IMDb, Wikipedia and Metacritic.

This research is focused on fiction feature films (so not short films, TV movies, documentaries, etc) and includes all movies released in cinemas in North America between 2000 and 2019. I left out 2020 due to the pandemic making “theatrically released” slightly redundant criteria. I don’t see any reason for the 2020 crop to be significantly different from what we’ve seen above.

In today’s research, ‘Actors’ refer to the top ten billed actors on each movie, as detailed in online credits. The term ‘actor’ is not gender-specific in this case. 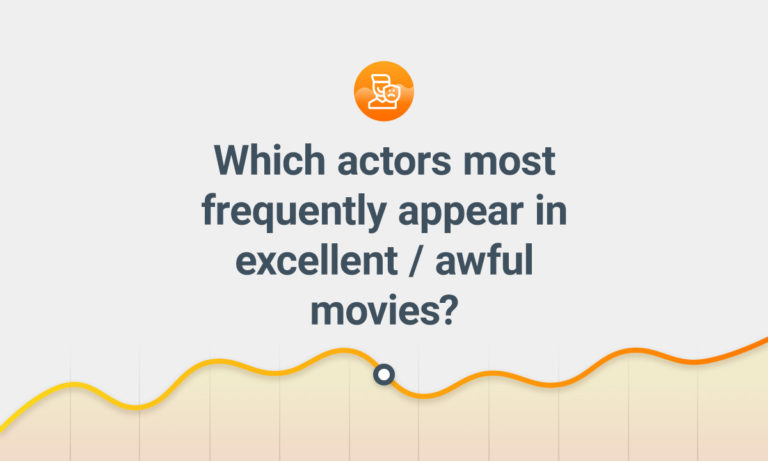 Which actors most frequently appear in excellent / awful movies?