21 February '22 4 Comments on How often are screenwriting credits shared?

The Hollywood cliche of a screenwriter is of a troubled genius who struggles valiantly alone to give birth to the highest form of art there is – a movie screenplay.

In truth, screenwriting is far more often a collaborative process.

Two of the major ways people collaborate on movie scripts are:

To get a sense of how this works in practice, I crunched the numbers on the writers of all the live-action movies released in North American cinemas between 2000 and 2019.

How many films have more than one writer?

Over the past two decades, just over half of the live-action films with a cinematic release were written by just one writer.

If you want to read more about how many writers work on a film, you may enjoy this past research on the topic.

How many teams of writers work on shared screenplays?

Let’s zero in on the films with more than one writer. If we imagine a film which has two credited screenwriters, then there are two ways they could have worked – writing together or writing separately (one after the other). In the first instance they represented one writing team, whereas in the second we could say that two teams worked on the script (albeit two one-person teams).

The Writers Guild of America’s (WGA) crediting rules dictate that writers within a team are adjoined with an ampersand (i.e. “Person One & Person Two”) and teams are joined with an “and” (i.e. “Team One and Team Two”). The WGA normally allows just three people in a team and a maximum of three teams, meaning that the longest allowed writers’ credit block would be:

The chart below shows the number of writing teams on live-action movies over the past twenty years, focusing just on movies with more than one writer. As the chart shows, family films and biographies are most likely to have more than one team, while comedies and romances are the least.

What gender are movie screenwriting teams?

How are the order of names within a team decided?

While the WGA dictates who gets a writing credit, they only have partial control over the order. The order of billing between teams is dictated by each team’s contribution to the final movie, but the order within a team is up to the writers.

If the inter-team crediting order were entirely random, then we would expect the names appearing in alphabetical order 50% of the time in two-person teams (i.e. AB, not BA) and 17% of the time in three-person teams (i.e. ABC, not ACB, BAC, BCA, CAB, CBA). Looking at our data, we can see that in practice things work a little differently. In both cases, alphabetical order is more common than random, implying that many teams are relying on the alphabet to provide agreement.

Today’s research is looking at live-action movies relased in domestic cinemas between 2000 and 2019, inclusive. The raw data came from IMDb, The Numbers and Wikipedia.

All references to writers in this research relate to people publicly credited as having written the script. This excludes authors of source material (i.e. the novelist whose book the film is adapted from), people who contributed minor additions (i.e. receiving “additional dialogue by” credits) and any uncredited writers or script doctors. The calculation of teams was conducted on films which correctly use the WGA’s crediting rules, which denote that writers within a team are adjoined via an ampersand and teams are joined via an ‘and’.

I found a small number of films which have inconsistent reporting of writing credits. For example, on the poster for The Forest (2016) there is just one writing credit (“Written by Nick Acosta”) whereas on IMDb three people receive a “writer” credit (Nick Antosca, Sarah Cornwell and Ben Ketai). In another case, Beasts of No Nation uses the ampersand to join the credits of the screenwriter (Cary Joji Fukunaga) and the author of the source novel (Uzodinma Iweala).

I have split the gender stats into two categories as this reflects the way data has been captured over the period I studied. In the future, there may more nuanced databases which capture gender fluidity and non-binary identities, but until then we’re left with a binary approach. I used the gender the person currently publicly identifies as. I have referred to the two studied genders as “men” and “women” unless grammatically incorrect to do so. How many movies credits go uncredited? 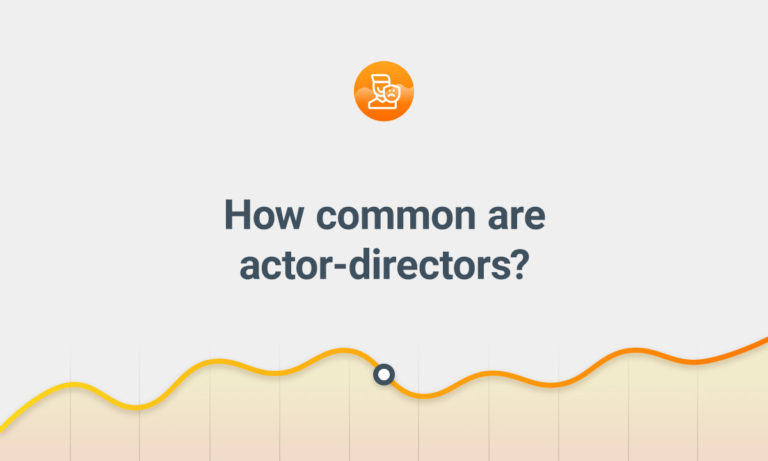 How has the average Hollywood movie crew changed?