In last week’s article, I looked at the claim that mid-budget dramas are not being made anymore.  Although the conclusion was that this is a myth, there was strong evidence to show that they are being squeezed, resulting in ever-decreasing budgets.

One reason often given for the tougher market for traditional movies is the rise of Subscription Video on Demand (SVOD) platforms and the content they commission.

The largest and most successful SVOD service is Netflix so I thought it would be interesting to take a look at the types of content they are commissioning, under their ‘Netflix Original’ banner.

Let’s look at the movies first.

At the time of writing, there are 60 Netflix Original movies available to watch. In the early days of Netflix’s SVOD offering, many customers (including myself) lambasted the poor quality of movies available to stream.  They appeared to have focused on quantity over quality.  Over the years, their selection seems to have improved (or maybe my standards have dropped?) and it’s possible that Netflix Original movies will take the same path.

The most high-profile movie commission Netflix has signed to date was their four-picture deal with Adam Sandler.  Mr Sandler’s movies have been declining in quality for a while and after the failure of Sony’s big-budget bomb ‘Pixels’, he decided to focus on content for Netflix.

The press were not kind to the deal – for example, The Independent reported a quote from Netflix boss Ted Sarandos with the headline: ‘Netflix boss defends giving Adam Sandler money to make awful films‘. Film critics are also not fans of Adam Sandler’s work.  The first movie to come out of the Netflix deal, The Ridiculous Six, scored 0% on Rotten Tomatoes.  This means that none of the 33 critics who reviewed the movie thought it was any good, and the overall average on Metascore is 18 out of 100 (i.e. not even a one-star movie, on the traditional five-star system).

Despite this critical mauling, just this week Netflix announced that since December 2015, Netflix subscribers have watched over half a billion hours of Adam Sandler movies. Netflix currently has around 100 million subscribers, meaning that the average Netflix viewer has consumed five hours of Adam Sandler movies over the past sixteen months. Yikes!

Let’s move away from Adam Sandler for a moment and look at the quality of all Netflix Original movies.

I compared the IMDb user score for fiction Netflix Original movies with that of all fictional movies released in US cinemas over the same period. The average score for a Netflix Original movie is 6.1, compared with 6.5 for all movies released theatrically.

Netflix documentaries fare much better, with an average IMDb score of 7.4 out of 10.

Using IMDb’s genre system (and assigning up to three genres per movie) we can take a look at what types of movies Netflix has support to date.

41% of the movies are documentaries.  Drama is the most common fiction genre among Netflix Original movies, accounting for six out of ten currently available on the platform. Other popular genres include Comedy (49% of fictional movies), Biography (23%), Thriller (20%), Action (20%) and Crime (20%). 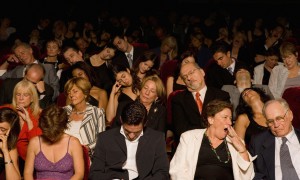 It will be interesting to see how the length of SVOD content evolves over the years.

The typical length of a feature film (90 to 120 minutes) has evolved to suit the needs and physical restrictions of cinema distribution.  Films were shipped in bulky film cans, had to fit on projector reels and overlong movies could reduce the number of screenings a cinema could accommodate in a day (thereby lowering ticket and concession sales).

Not to mention the human factor, as eloquently put by Alfred Hitchcock:

The length of a film should be directly related to the endurance of the human bladder.

But SVOD services such as Netflix don’t have to worry about these concerns.

Although a longer film will involve delivering more megabytes of data to each viewer, this has a negligible additional cost when compared to that of printing and shipping film cans.  Their system has no maximum running time it can handle (unlike a projector), and people can pause the movie at any time to answer nature’s call.

In the first instance, SVOD movies are matching the form we have come to expect from a “movie”, but over time we can expect this need to dissipate and a broad spectrum of lengths to emerge.

All but two of Netflix’s original movies fit into the traditional length for a movie, with the exceptions being Extemis and The White Helmets, which are 24 and 41 minutes long, respectively. The average Netflix Original fiction movie is 97 minutes long, while the documentaries are an average of 89 minutes long (including the two shorter films mentioned above). This blog is focused on feature films, but I thought it would be remiss if I didn’t at least mention some of Netflix’s Original television shows.

Overall, the television shows coming from Netflix appear to be of a much higher quality than their movies.  The average IMDb user score is 7.6 out of 10, and some shows score above 9. Netflix is responsible for creating six shows in IMDb’s top 100 TV shows of all time chart.

Using the same genre system as we did for movies, we can see that the most common genre for Netflix TV shows is Comedy. I only looked at movies and shows that were available to watch at the time of writing.  That means there are a few shows and films expected to go live in the coming weeks which were not included.  These include Brad Pitt’s new movie War Machine (which Netflix reportedly paid $60 million to acquire), Jeff Garlin’s Handsome: A Netflix Mystery Movie (also titled: “A Lil Dab’ll Do Ya”) and Naked (Plot as Netflix describes it: “Every time Rob Anderson comes close to marrying the girl of his dreams, he wakes up naked in a hotel elevator, reliving his wedding day“).

udging what is and isn’t a true “Netflix Original” can be tricky. For example, some sites credit the documentary ‘Zen of Bennett’ as an early Netflix Original and yet the film had a (very limited) theatrical release.  Another early test-case is the film Mitt, which was finished with Netflix money but was not commissioned by them in the way the new wave of Adam Sandler movies have been.  The criteria I used for inclusion in today’s research was that movies had to premiere on Netflix (i.e. no theatrical release beyond film festivals).  A good test seems to be if the movie is still available to watch on the platform, as Netflix seeks worldwide rights in perpetuity for its Originals.  The Zen of Bennett is not currently available for me to watch on Netflix, whereas Mitt is.

As today’s focus is Netflix Original content, I have not included TV shows which were either “Continuations’ (when Netflix makes new episodes of an existing show, such as season four of Arrested Development) or ‘In Partnership’ (where shows are made alongside a broadcaster and so are only classed as Netflix Originals in some countries, such as Lilyhammer).

When looking at the IMDb user scores, I excluded shows with fewer than 1,000 votes to account for the effect of people connected with the show voting and skewing the overall average.