How much does the average movie cost to make?

8 July '19 10 Comments on How much does the average movie cost to make? Among the most frequent questions I’m asked by those new to the film industry is “How much does the average movie cost to make?”

The short answer is “it depends”.  It’s similar to asking “How much does the average meal cost to make?” It depends where you are, who’s making it, for whom and whether Robert Downey Jr. is involved (ok, so maybe this last one only applies to movies).

This would make for rather a short blog article, so instead I thought I’d take a deeper look at whether there are useful ballparks which can give a sense of scale on movie budgets.

I built up a dataset of 5,713 feature films released domestically (i.e. in US & Canadian cinemas) for which I could find a public budget figure.  See the Notes section for details and caveats of budget information.

For readability, I’m going to write as if all the budget figures stated below are pure fact. In reality, some will be over- or under-estimates and almost all publicly available figures have murky provenance. So for the rest of today’s article please imagine I have added “reportedly” ahead of any statement of budget figures.

If we line up all those movies from the cheapest to the most expensive then we get the chart below.  On the far left are the movies which were the cheapest to make (such as Primer, shot for $9,000) and on the right are the priciest (such as Pirates of the Caribbean: On Stranger Tides, which reportedly cost $410 million).

The moviemaking process has changed dramatically over the past twenty years and so today I’m going to focus on the budgets for the past five years. Next week I’ll show how they’ve changed over the past two decades.

What is the most expensive movie genre?

A budget of over $18 million may put you in the higher tier of movies but it isn’t even a quarter of the median budget for Adventure films ($76m).  Other expensive genres include Sci-Fi ($61m), Fantasy ($60m) and animated movies ($60m). Do you have to spend money to make money?

The reason producers increase their budgets is to make a more valuable product, paying for bigger movie stars, making it more adrenaline-inducing or visually interesting. But every extra dollar they spend has to be raised and repaid.

Movie profitability is a complex topic (and one I’ve covered many times before) so for today’s article, I’m not going to get into the weeds of which movies are or are not likely to have made money.  Instead, we will simply overlay the median domestic box office gross (i.e. the cash collected in US & Canadian cinemas from ticket sales) for each genre with budget data from the previous chart.

Horror hugely outperforms other genres, collecting an average of 2.3 times its production budget at the box office. If you want to read more about budgets then you may enjoy these past articles:

Today we have been looking at production budgets, rather than the additional costs involved with releasing and marketing a movie.  If you want to learn more about how much more is spent by studios once the movie is finished then you may enjoy these articles: How movies make money: $100m+ Hollywood blockbusters and How films make money pt2: $30m-$100m movies.

The data for today’s research came from the Opus / The Numbers, IMDb, Wikipedia, Box Office Mojo and the film trade press.  I manually fixed any suspect figures I found, such as the Chinese war epic which IMDb claims cost $18.

The publicly available figure should be regarded as a rough ballpark, rather than a precise figure for a bunch of reasons.  We can’t trace the original source of the figure, we don’t know if they are including soft money/rebates, the filmmakers may not be telling the truth, etc.  A while ago, I gained access to the full, real costs and income of 29 Hollywood movies budgeted over $100m and so was able to compare their true cost with the figure stated on Wikipedia.  I found that on average these movies cost 12.5% more than their Wikipedia entry stated. 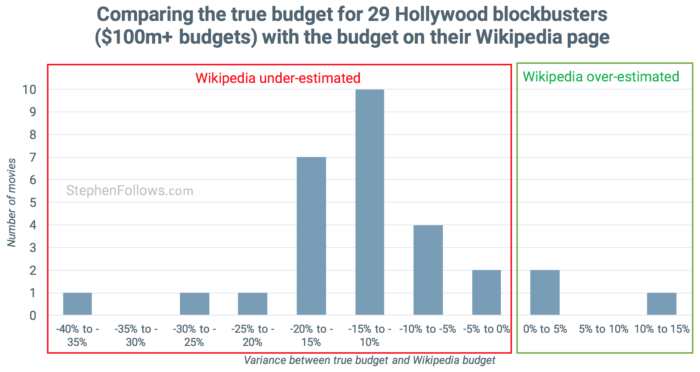 I don’t know if this pattern is reflected with lower budget movies.

The genres come via IMDb, whereby films are permitted to have up to three genres.  I appreciate that the IMDb genre model leaves a lot to be desired (i.e. over-classifying projects as a ‘Drama’, stating ‘Animation’ as a genre rather than a production method, etc) but I fear that unpicking this will have to wait for a future research project!

Next week I’ll continue the journey, looking at how budgets have changed over the past two decades.